How can I resaw material using only hand tools?

I currently do not own a table saw or a band saw which is what I have seen typically used to resaw wood in half or to smaller dimensions. I would like to half a board to make a small box but only have a Japanese pull saw, a reciprocating saw, circular saw, a chop saw, and a hack saw.

Which tool would be best to accomplish this and keep the cut reasonably straight? Using the pull saw is my first guess but the board is about 5 feet long and I worry about deviating from the line on material that's about a half an inch thick. I plan to plane down the material once it's sawed so I don't mind losing some of the waste material.

Which tool would be best to accomplish this

Of the saws you list I think the pull saw is the best choice, in fact while it's theoretically possible to do it with one or two of the others doing it with the pull saw may be the only reasonable option.

The Japanese routinely resaw boards by hand with their saws* and many Western woodworkers who use Asian-style saws find them good for this, better than the Western-style saws they've tried for the same operation. I should mention though, when comparing it should be done using a sharp, properly set rip saw on the Western end, and not a modern panel saw with general-purpose teeth which not infrequently is what the comparison is against.

A lot of this depends on you. There are some standard techniques that can help ensure a straight cut but just as with anything involving hand tools it usually requires practice to get good results (some people have more of a knack for it than others).

Fundamentally it starts with careful marking out and good sawing technique. You saw slowly (letting the saw do the work and not forcing it, and deliberately not trying to saw fast), and pause often as you go so that you can spot and correct for drift when it occurs. Note these points are just as important for an experienced sawyer as for a beginner, so it's best to get into the habits early.

And also you shouldn't expect to saw a board through in one operation start to finish, that's nearly never done when resawing by hand. Instead expect to work in from both ends to meet up in the middle, repositioning the wood at least three or four times but frequently many more times than this.

Since most people tend to drift in the same direction try not to flip the board when doing this so that the drifts go in opposite directions.

If you do drift off your line a fair bit the sawn faces will require quite a bit of planing to get them flat so you can loose quite a bit more thickness than intended. You may want to factor this in to begin with by working to a greater thickness than eventually needed, or be flexible about the thickness of the stock you end up with.

Some pics showing resawing in action: 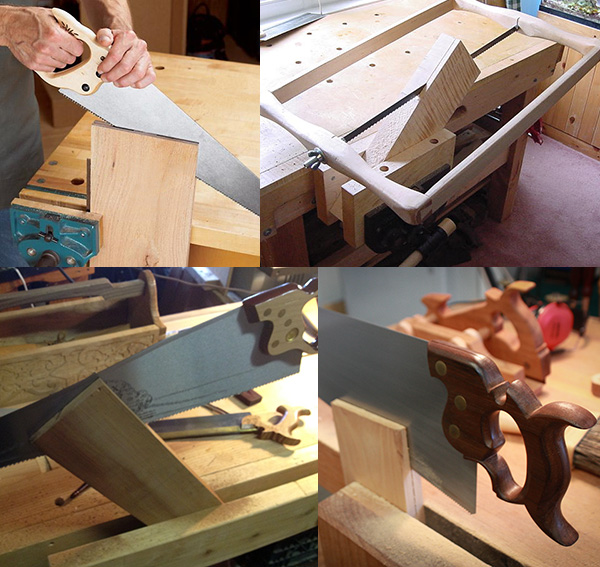 Bonus pics showing it being done with a ryoba: 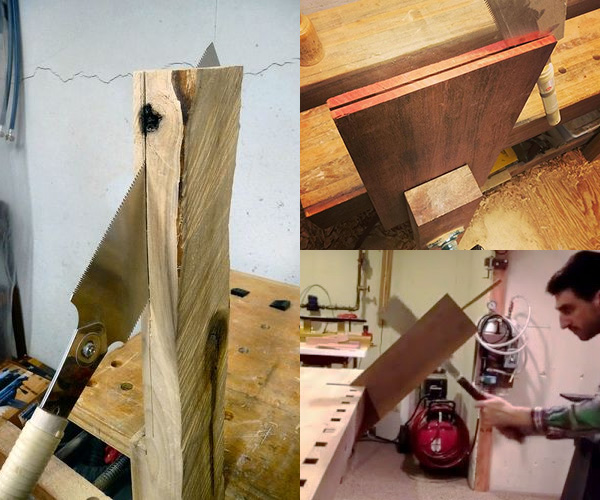 I hope these help get across the importance of having your work firmly held as you saw. While using a vice for this is one of the simplest and best ways it's not the only way so anyone without a vice don't despair, you can get creative with a few clamps if that's all you have. But the work must be held firmly or you're setting yourself up for a world of trouble.

Detail pic of a ryoba showing the two types of teeth clearly: 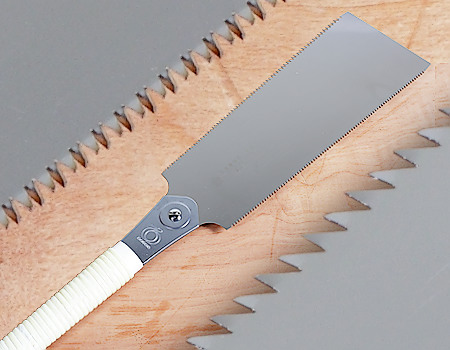 The larger triangular teeth are the rip teeth.

Kerfing tool
This is the way to 'cheat' on the experience of doing these cuts many times so you have become very good at it. Using a kerf established around all four edges of a board is the number one way to guard against drift and a dedicated kerf-cutting tool is the best way to create those kerfs.

On shorter boards it's quite doable to use a marking or cutting gauge, a knife & straightedge and a chisel to create a definite groove on the edges to work in from, but a properly established kerf is far better at keeping the saw on track (you still have to do your part).

Unfortunately it means you either have to buy a kerfing tool (or kit) or make one from scratch, but if you plan to resaw a lot by hand you may find it worth the money or effort. So far I haven't bitten the bullet and made one but it's on my to-do list as resawing any significant length is proving challenging.

Some further outside links with much more useful information, pics and video on resawing by hand:
Resawing By Hand on Close Grain.
Resawing again – Problems and Solutions on Bob Easton's blog.
Resawing a board by hand from Badger Woodworks.

As you can see, all three of the above emphasise the importance of flipping the board frequently.

*Note that this is a ripping operation so ideally you want to use a rip saw for it. There's a good chance your generic "Japanese pull saw" is sharpened for crosscutting and while it can do the job it'll labour, particularly in fibrous woods.

Not the answer you're looking for? Browse other questions tagged hand-tools hand-saw resawing or ask your own question.