Is the "paper test" actually relevant to sharpening chisels and planes?

It is pretty common to see references to the "paper test" for checking for sharpness of an edge -- the idea that you should be able to lightly rest the blade against the edge of a piece of paper and it should "bite" by itself and easily slice through the sheet with hardly any pressure. For example, out of the box a disposable safety razor blade will easily pass this test.

Now, I'm a beginner at woodworking and I've been trying to learn to sharpen tools -- I bought some inexpensive Dewalt chisels a long time ago and more recently a Mora whittling knife to practice sharpening with. (I've got a Stanley No 4 plane arriving soon from eBay, as well.) After a decent amount of practice (using DMT interrupted diamond stones up to Extra Fine or 3M microfinishing film on plate glass to 15u, stropped on chromium oxide on leather in both cases afterward), I'm able to get them to pass a lot of other common sharpness tests:

Normally I would just say the only thing that matters is how they cut wood -- but as a beginner I don't really know whether I'm experiencing more resistance than I should, or what the shavings should really look like when you try to shave end grain, and so on. In the absence of using "properly sharp" tools myself I really don't have a feel for what I should expect from a tactile perspective or an "end result" perspective.

So, my questions are:

It would be tremendously helpful to know whether I'm getting myself frustrated over something that is either impossible or unimportant.

UPDATE: After actually actually POLISHING the bevel of this chisel on the chromium oxide-on-leather -- say like 50x eight inch long passes on the bevel and 5-10x on the flat (instead of just a very light stropping), the results have improved dramatically. I'm able to take very thin shavings off of end grain and it looks pretty smooth. Fresh off honing it will pop some leg hair although it's not 100% -- I'm wondering if my arm hair is just too fine? -- and it also does significantly better on the paper test, although not perfectly.

Here's what it does to eastern white pine endgrain: 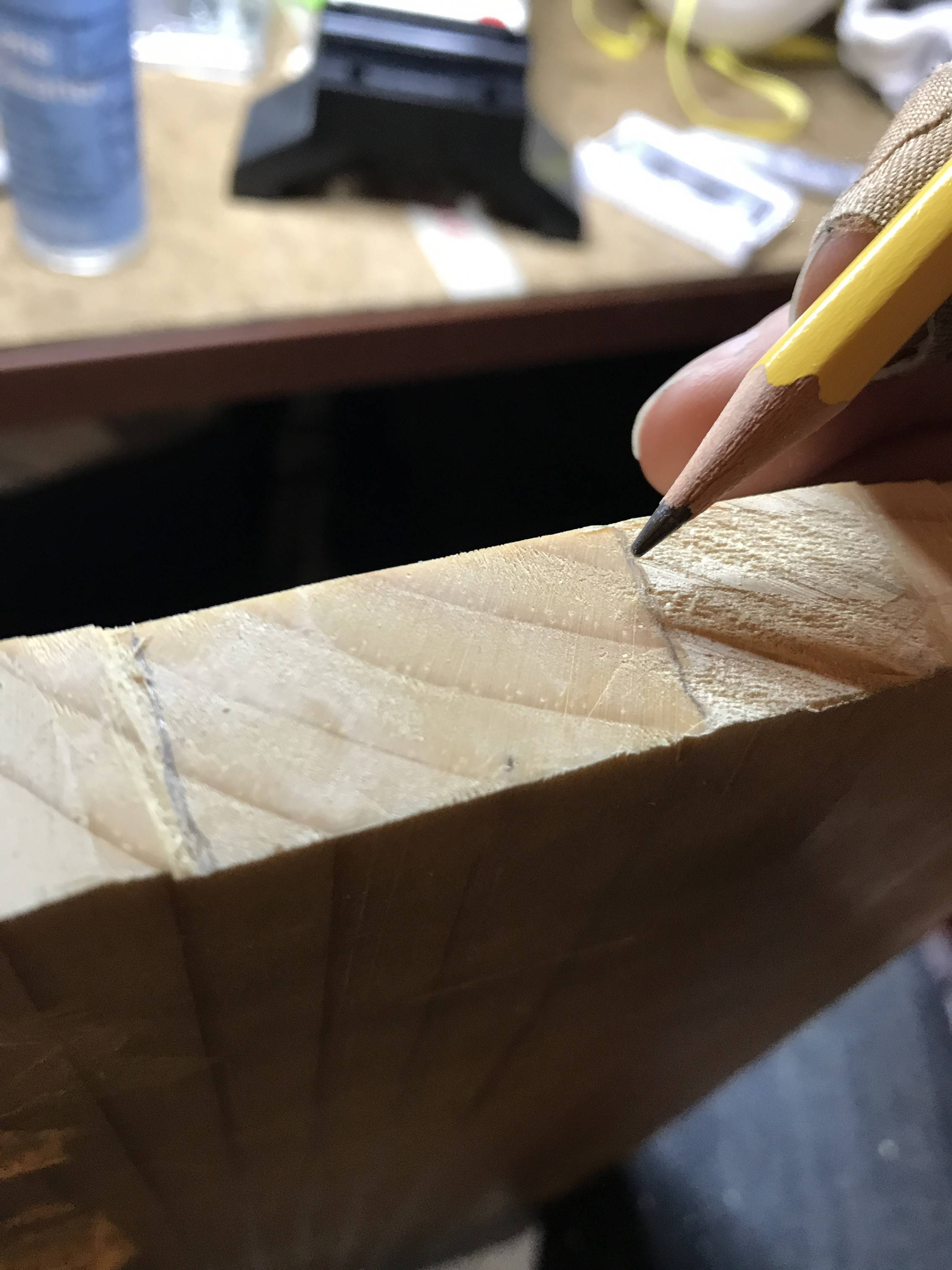 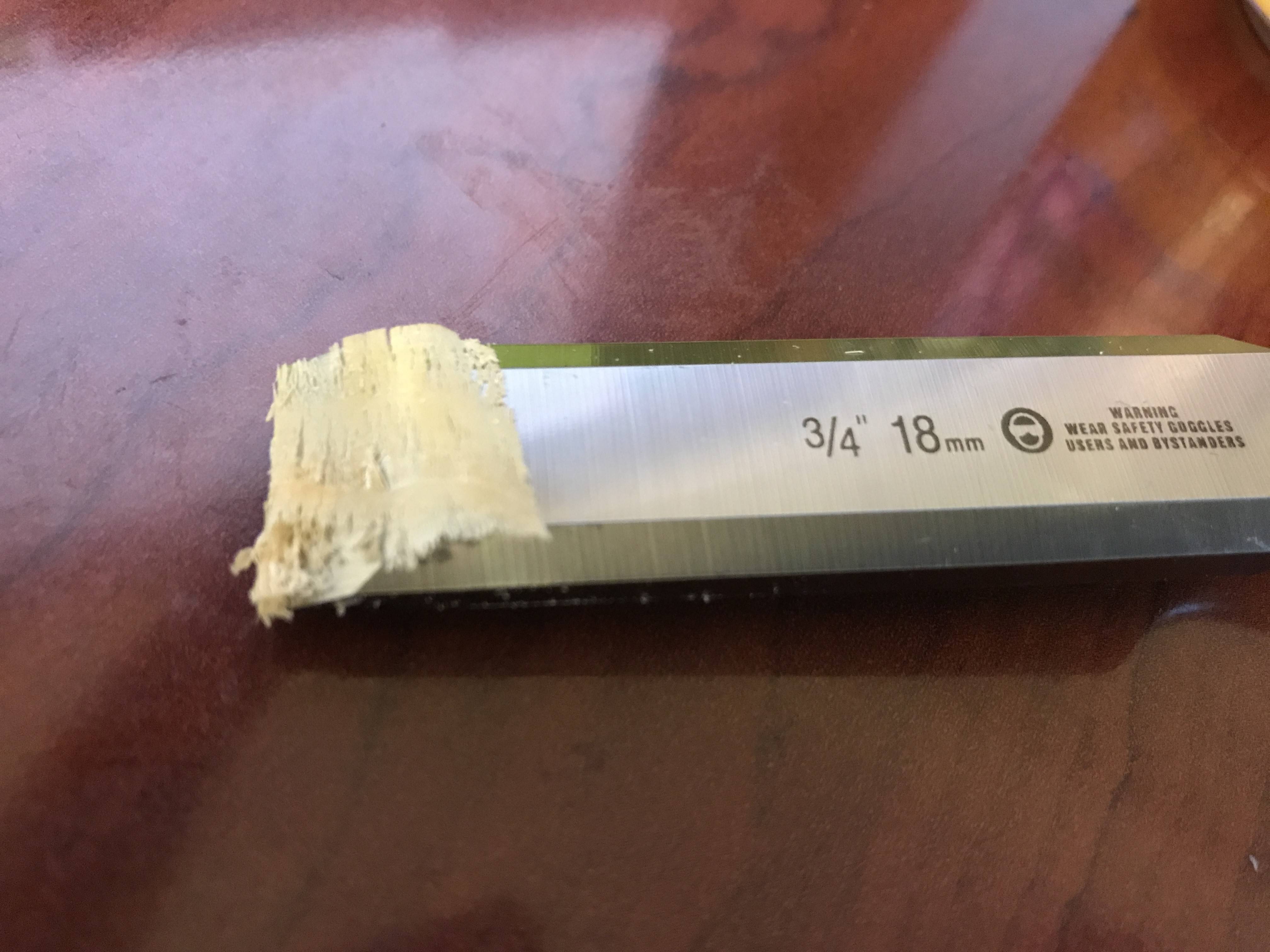 No. As I think I mention in a previous Answer many edges can slice paper while still not being as sharp as you'd really like for some woodworking tasks1.

Lots of the 'substitute tests' (anything that doesn't involve slicing wood) can fall short, although once you get to shaving sharp — which is far above the level of edge that will slice many types of paper — you are getting to the point where you know the edge is going to be sharp enough to do anything you need it to do.

You're quite right, this is what's most important and the only thing you really need to focus on.

Note: an important point here since the acid test in woodworking circles is frequently given as the ability of an edge to cleanly slice pine end grain: 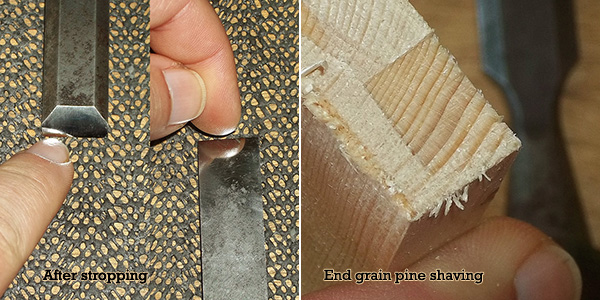 Taken from this previous Answer.

Not all edges need to be this sharp however.

If you can quickly, and without undue effort, hone and/or strop your edges to this level or better then by all means do so every time2. But for a lot of the run-of-the-mill tasks in woodworking, including the majority of planing, an edge less sharp than this will pass muster.

Razors and razor blades have a very small included angle while that of woodworking tools is generally larger (can be over double). The lower the included angle the better the cutting potential or slicing ability of an edge, but this comes at a cost of course and that is that the edge is thinner and therefore weaker.

To put this firmly in a woodworking context this is why you can get away with a 15° bevel on a paring chisel which is used for controlled paring, powered by hand pressure only, but you'd never put one on a mortise chisel which has to be forcefully driven into wood with a hammer or mallet and may have to withstand some levering as well.

Some further reading from previous Q&As:
Sharpening grits -- naming and selection
When sharpening, how do I assess what grit to start on?
Bench grinder, tool sharpener or sharpening stone?
What degree should I sharpen my chisel
How does one aggressively sharpen chisels and plane irons when damaged?

1 In addition to other reservations about the test paper isn't as uniform as one might think. Similar-looking papers don't have to actually be that similar, so the paper someone is using when doing a very impressive slicing demonstration in a YouTube video might appear to be similar to what you were using but actually be quite different. Furthermore some papers have a grain direction of sorts and will most definitely slice more cleanly in one direction than the other where you're cutting more fibres as opposed to parting them with the edge.

2 Typical honing time should be a few minutes at maximum. The only time the average woodworker should need to work on an edge for longer than about three minutes is when first sharpening or if some folding or chipping has occurred during use and it needs to be repaired. If you don't leave it too long you can hone or strop an edge in under 30 seconds.

The only test that really matters if it cuts wood cleanly and easily - as you say near the end of your question.

However, even a blunt spoon can leave a reasonable surface when cutting with the grain (well, okay, I may exaggerate slightly there), but the point is that you need to test on end grain - preferably soft end grain (eg pine) which is prone to tear out.

If you can get a smooth surface cutting pine end grain, then you know you're good to go.

I was hoping to quickly grab a chisel and demonstrate, but turns out I'm probably due to sharpen my chisels!

Here is a somewhat inadequate result indicating that I'm not sharp enough (but it's not toooooo far off, there's just a little tear out and it's not as smooth as I'd like) 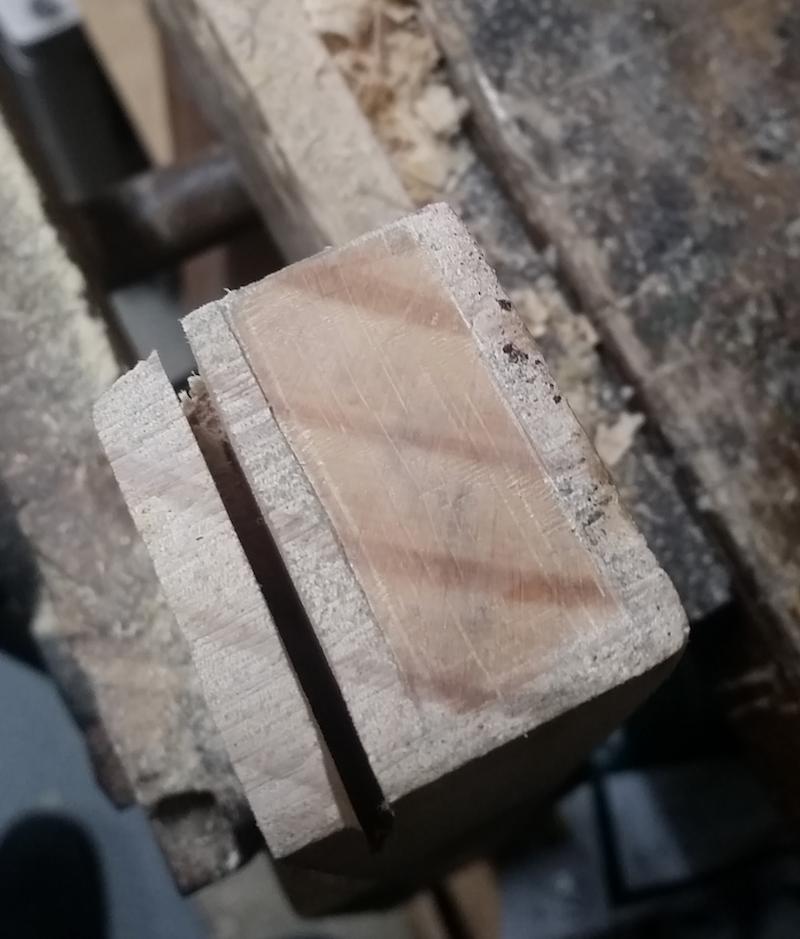 Not the answer you're looking for? Browse other questions tagged sharpening chisel blade or ask your own question.

19
Does it matter what kind of diamond stone I get?
20
How does one aggressively sharpen chisels and plane irons when damaged?
9
When sharpening, how do I assess what grit to start on?
6
Bench grinder, tool sharpener or sharpening stone?
10
Sharpening grits -- naming and selection
6
To what angle should I sharpen my chisel?
2
How often should I sharpen?
3
Planing end grain - cheap vs more expensive wood

10
Sharpening grits -- naming and selection
20
How does one aggressively sharpen chisels and plane irons when damaged?
8
How to sharpen a planer knife the right way?
2
How can I properly sharpen my knives with power tools?
10
Sharpening - grit progression