Independent of all the different kinds of surface one can use to shape, clean, and sharpen tools -- and perhaps independent of whether said surface is motorized or not -- I have to admit to being a bit lost as to what grades of abrasive exist in what media which should be used for what part of the task, and so on. "Fine" and "extra fine" seem to be defined differently for every manufacturer or medium, and not all of them give numeric values on the abrasive scale which might make them comparable... and I'm not certain whether 600-grit diamond is really equivalent to 600-grit wet/dry sandpaper on a surface plate and how either compares to any of the natural stones which are referred to only by name..

Is there a table, or rule of thumb, somewhere that would clarify this? Is it really just "go by the numbers and stop when you're satisfied with the edge"?

(Life was simpler when all I had was a jackknife and a generic pocket stone. Now that I can afford to make decisions, especially between different but equally valid choices, I sometimes get lost in them!)

Being a bit unsure of what equates to what is commonplace and even outright confusion is understandable because you can't trust comparative grit guides. Even doing a cursory investigation into abrasive stone comparison charts you should find some inconsistencies.

You might suspect this is an example of "You can't trust stuff on the Internet" but unfortunately it's more pervasive than that as this is also true of guides published in print, including those from the manufacturers themselves. So one has to be very careful about accepting any comparative information as definitive, although the defined grit size for any given product is more trustworthy (but not entirely reliable either). 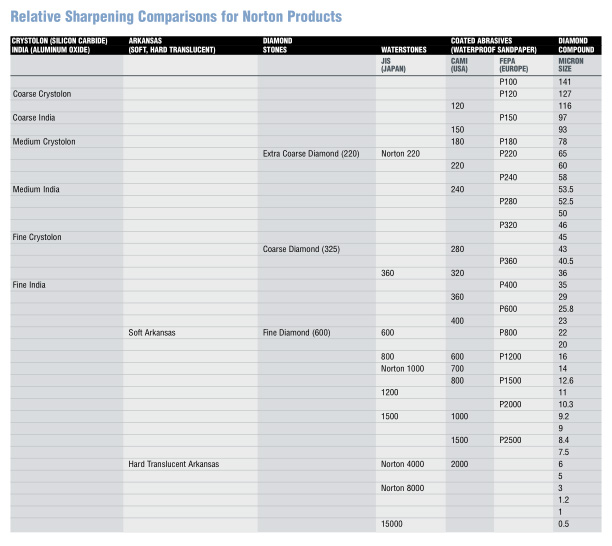 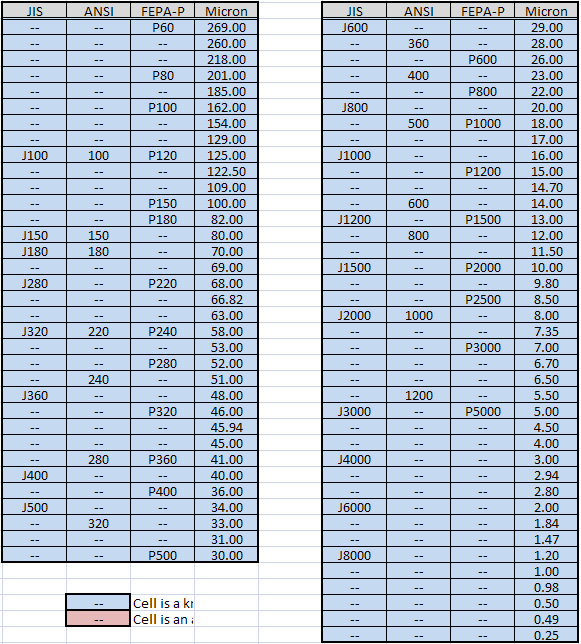 [Source: truncated from a chart found on Bladeforums]

As you can see they agree and disagree about equally. Worth also comparing these to the chart linked to in rob's answer.

and how either compares to any of the natural stones which are referred to only by name..

It's worth noting that natural sharpening media, just like wood, are inherently variable. Any given grit rating for a type of stone like Soft Arkansas or Belgian Coticule should be taken as an approximation at best.

In addition to some difference in apparent grit size they can vary in how well they cut, due to differences such as the grit:matrix ratio as well as in the variation of grit sizes within the stone (there is nearly always a mixture, with some or many smaller particles amongst the coarsest ones). Books going back to the 19th century mention the variability, e.g. that you might find "a quick-cutting [example]" of a finer stone.

"Fine" and "extra fine" seem to be defined differently for every manufacturer or medium, and not all of them give numeric values on the abrasive scale which might make them comparable...

Very true. Even for the same type of sharpening medium two manufacturers might have a slightly different grit size in products of the same name. FWIW and just from casual observation this seems to be spread fairly evenly from the fine to the coarse end of the market.

Is it really just "go by the numbers and stop when you're satisfied with the edge"?

To a degree, yes. But this is a little misleading as the fact is most people over-sharpen some or all of the time.

It's best to adopt a KISS approach to sharpening and not over-think it (very common in the West). First, what is the goal? To grind two faces to meet at a sharp edge, ideally with a zero radius. The more refined that edge, the less irregularity present, the sharper it is.

If that is firmly borne in mind it's much simpler to sharpen appropriately. It's also good to separate the concept of sharpening from honing.

Sharpening is edge creation. Sharpening is for new tools that don't yet have a proper edge, and when an edge needs to be created from scratch (pardon the pun).

Honing is edge refinement. Honing is the last step in sharpening but it should be the only step required when your knife, chisel or plane irons have lost their keen edge. So honing is what you do between sharpenings, meaning that in fact most of 'sharpening' is actually honing (or should be), since you can hone dozens of times between sharpenings so it is done far far more frequently.

If you hone well, and with sufficient frequency, you might need to sharpen yearly or less.

When honing you shouldn't even glance at your coarser sharpening media, and in fact a medium stone would often be much more aggressive than the edge needs. Using one fine stone or diamond plate, followed by a strop, or a fine and ultra-fine stone if using waterstones, should normally be more than sufficient.

And in fact at the very simplest you can hone by stropping only. An edge that's not quite sharp enough can be brought back to shaving-sharp in just 20-30 seconds by stropping, this is commonly done with carving knives and should become more common with chisels and plane irons.

This is partly because each term from Extra Coarse to Ultra Fine represents a range of grits.

I'm not certain whether 600-grit diamond is really equivalent to 600-grit wet/dry sandpaper on a surface plate and how either compares to any of the natural stones which are referred to only by name..

One hint is that the stones only referred to by name have well-known grits or grit ranges. Unfortunately, the relative terms such as "Coarse" and "Extra Fine" are sometimes applied to the different grits provided by each of these "named" stones. As a result, one named stone's coarse grit may be equivalent to another stone's fine grit.

We're in luck, because Christopher Schwarz wrote an article in which he compiled a list of sharpening products arranged by relative fineness, based on the abrasive sizes in microns. Note that he includes a disclaimer that he is only working from the advertised grits, not the actual grits. As Graphus pointed out, the same type of stone in the same grit from multiple manufacturers, and even from the same manufacturer, can vary. However, this is largely inconsequential because it isn't necessary to move through every successive grit when sharpening.

Even with a badly-worn or even misshapen edge, you only need to work through at most 3 or 4 successive grits before honing. Although it's true that it's more efficient not to skip grits, it's a lot more expensive (and more hassle) to deal with a dozen or more grits than it is to work through just a few. So in practice, it doesn't make much difference whether your 600-grit stone is actually closer to 550-grit or 650-grit, because you're most likely going to skip at least a couple hundred grit every step along the way.

Even within sandpaper, there are two different standards--the US CAMI grits, and the European "P" grits--both of which are intended to specify a given number of abrasive particles per unit of area.

For diamond-coated lapping plates ("diamond stones"), the "grits" are technically defined in terms of mesh, or number of microns between rows of the mesh. However, the "mesh" number advertised by lapping plate manufacturers such as DMT and EZE-Lap are defined to be equivalent to sandpaper grits. It's also worth noting that the manufacturing process affects how a diamond plate will perform over time. Some plates are designed so that the microscopic crystals fracture with use, exposing new, finer abrasive over time. Others are designed so the crystals remain intact. The downside to this approach is that they can be more prone to loading, requiring more frequent cleaning. Both designs are very durable and relatively low-maintenance if used properly with lubricating fluid.

Beyond the upper bound of diamond-coated lapping plates, you enter the polishing and honing grits, typically much higher than 1000 grit. These grits are the territory of Japanese waterstones, diamond paste, and honing compound.

For all practical purposes, as long as you stay within one system, you just have to work your way from the coarser grits to the finer grits. If you want to mix and match systems, you need to know that the two products' grits are graded on roughly same scale or you need to find the abrasive size in microns.

Adding another answer to my own question:

Recently, Lee Valley Tools tackled this question and did an analysis of all the manual-sharpening abrasives they carry -- from sandpaper to stones to polishes -- reconciling the differences between grit-size systems, manufacturer's labels, materials and cutting patterns, with some comments on cost and maintenance of the systems. They gathered this all into a master chart (https://www.leevalley.com/en-us/tools/grit-charts) with advice on how to use the data to create a reasonable sharpening sequence out of whatever you want to use.

https://www.leevalley.com/en-us/tools/sharpening-by-hand is their catalog incorporating this research; hardcopy of that is also available.

They also posted https://www.leevalley.com/en-us/discover/sharpen-net, a set of pages that attempt to demystify the actual sharpening process and help novices start getting good results.

Admittedly, they do have an interest in selling tools. Some old timers will tell you that a sharpening jig is a crutch, for example, and that you should just learn to feel for the right angle. I almost agree with that -- sharpening by touch worked fine for hundreds of years, after all -- but I feel no shame in using "training wheels" until I feel ready to try balancing without them.

Not the answer you're looking for? Browse other questions tagged tools sharpening or ask your own question.

9
When sharpening, how do I assess what grit to start on?
5
Bench grinder, tool sharpener or sharpening stone?
8
How to sharpen a planer knife the right way?
5
Is the “paper test” actually relevant to sharpening chisels and planes?