I want to cut a mostly rectangular hole out of a piece of 3/4" plywood about 21" wide by 32" tall. I would like the corners to be somewhat rounded (about a 1" - 2" radius), and I want to rehang the cut out section back in the main sheet as a door. I know that I could simplify my life by cutting the door and the opening from separate pieces of plywood, but I'd like the grain to match which is why I want to reuse the cutout piece as the door.

What is a good way to go about making this cut keeping the straight parts parallel and the rounded parts clean and uniform to reduce the amount of reworking and cleanup needed to finish the job?

There are generally speaking two ways people go about this kind of work these days, using a router or jigsaw.

With the router you'd use a suitable straight-cutting bit with a bearing guide in conjunction with a template made from thinner material, running the bearing carefully around the inside perimeter of the template while being careful to avoid the router wandering into what will be the door.

A good material for the template would be 1/4" (6mm) tempered hardboard, but thinner plywood or even solid wood could be used. The rounded corners of the opening would normally be drilled using a suitable bit, either a Forstner or a flat (spade) bit. A hole-saw could also be used if one of the right size is available.

Internal jigsaw cuts are normally started in a drilled hole but some guides show a technique where you carefully plunge a suitable saw blade (with the saw running) into the material. With the latter technique in particular I would do some test cutting on scraps of your plywood to refine technique before committing to the final cut. Practice doing the curved cuts would also be advisable.

The radiused corners would generally be cut freehand with a jigsaw (working to a marked line obviously) and while you can cut the straight sides freehand as well you're more likely to ensure good results if you create a basic fence setup.

At the simplest this would just be four lengths of wood clamped at a suitable distance from the marked lines, this distance being the measurement from the side of the blade to the edge of the jigsaw's baseplate or 'shoe'.

In use the baseplate would then be carefully run along the edges of each of the boards to make the straight cuts, again being careful not to drift away from the edges into the door.

Note: if both faces of the plywood need to have the best surface possible then it's worth investing in a good blade made specially for clean cutting of plywood. Some blades give a good top surface, others a good bottom, but the best will give good results on both sides of the board (generally these will be reverse-tooth blades, where the teeth face downwards).

If the tools in the wonderful answer from Graphus are not available to you two saws would do this for you just as well. 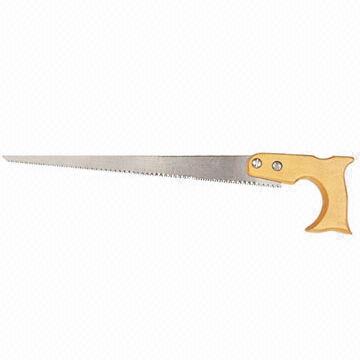 First the hand saw would be for the long straight cuts and you could switch to the keyhole saw for the curves. The first real problem you have is making the first cuts to fit the saws in. I suppose you could drill in with a small bit (that you are not attached to) and pull it along carefully.

I understand that you are looking for nice parallel cuts so this question covers some techniques that should help: When using a hand saw, how do I cut a straight line?

I see your door vision a protential issue since you would usually need a nice gap between the door and the frame. Especially over time one the weight of the door and wood settle. I think the trade off of a larger space might be advantageous in this case.

45
When using a hand saw, how do I cut a straight line?

10
Properly securing a ramp
14
How can I cleanly cut a large circle out of plywood?
4
3 (or 4?) piece plywood desk over bike trainer
5
How to cut and join "wedges" of plywood to form a perfect circle
3
How to glue hardwood to plywood core door?
1
Install Door Frame and Bifold Doors
6
Routing out recess for base plate - router table
1
Chip out outside side of track saw cut?
2
How to determine minimum width of cabinet door stiles and rails?