Is it a good idea to use a router bit intended for flattening surfaces, slabs etc, like this one: 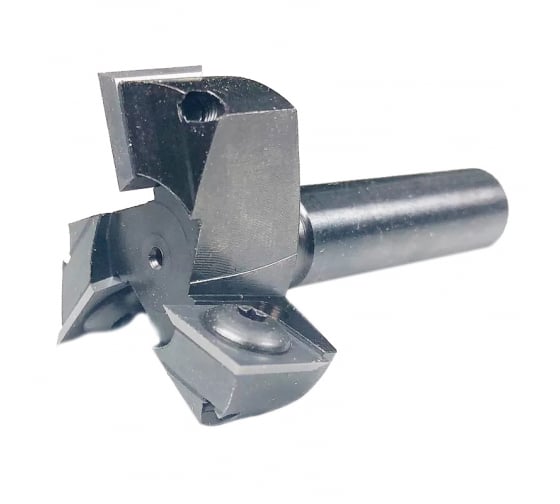 in a router table? The idea as follows: I attach two parallel bars to the piece I'm going to flatten, then I lift up my bit a little, start a router and move the piece over it. I think that should make the surface flat, assuming I rised a bit enough.

Any points, why it might be not a good idea?

You can of course chuck this style of bit into a router mounted in a table and I can envisage some potential uses for it1, but to then use it for the intended purpose — flattening an end-grain cutting board — would be a bad idea for multiple reasons.

The first two relate to control of the workpiece, and the consequences if you lose it.

Most important is personal safety. You don't know if or when the router bit will grab the board and try to snatch it from you, and with a bit this large the amount of grab could be very high indeed. Where are your hands intended to go and is one potentially in the path the router is trying to take it if this happens? And it could project the workpiece towards the operator, not away, leading to a kickback-like injury to your torso.

The second concerns the wellbeing of the workpiece. You'll be working blind, so you can't see in real time what the bit is doing and whether a problem is occurring that can't be heard but only seen. And how do you check progress? Unless you plan to turn the router off and let it spin down2 every single time you want to inspect you'll be lifting off or pulling back the board while the router is running..... exposing a large and very dangerous bit sticking up unguarded from the table, so personal safety strike two! And then you have to put the workpiece back down carefully and push it back into position (still working blind remember) until the bit unexpectedly re-engages with the work. It even sound scary in words.

The above really overshadow anything else, but additional issues relate to the parallel bars you're envisaging using, including how they'll be attached to the board, how you'd ensure they are parallel to each other and then parallel the opposite face of the board. While these difficulties can undoubtedly be resolved it's a lot of futzing about when the stated goal is to make the job easier.

And there is already an established way to do what you're seeking to do that's quite straightforward and much safer (plus it is rewarding watching the progress).

Use a router sled
A router sled is the way to do this. In addition to being possibly the same amount of work overall there are so many advantages to doing it this way:

And to top it off, the time and material you invest into making your sled pay off over time since now you have a tool that can be used again and again to do the same sort of job with very little setup time.

1 Faster forming of tenons on large workpieces for one.

2 Subjectively this can take A Long Time.

Two main issues with this approach I can see:

Finally, to fully flatten the piece all the way around, you'd need to route into the "rails" as well. This would require the rails to be big and sturdy enough to still support the work piece while the router removes some material from them.

Any points, why it might be not a good idea?

Not having used a flattening bit myself, I can't say from direct experience, but there's no reason that it shouldn't work. The main thing you'll need to be careful about, beyond keeping your fingers away from the bit, is to always be aware of where the wood that you're removing is in relation to the bit. If you were to try to do this freehand, by just moving the workpiece over the bit without a fence, it would be very easy to inadvertently make a climb cut, which could cause the workpiece to move suddenly in a direction you don't expect. I'd suggest using your router table's fence and making passes in the usual direction (right to left), and moving the fence a little farther from the bit after each pass. That should ensure that you're always removing stock on the side of the bit that will cause it to pull the work toward the fence rather than push away from it.

Not the answer you're looking for? Browse other questions tagged router-table or ask your own question.

5
Two-part router table dust collection, both four inch?
13
Is a plunge router suitable for router table work?
8
What features to look for when buying a router lift?
5
Stabilizing thin boards, with trim, vertically on a router table
2
What top surface approach is best for a router plate in a custom cabinet?
7
Can I turn my router table into a jointer?
3
Max bit size in Craftsman fixed-base router
3
How do I safely accomplish plunge cuts on a router table?
4
Using plexiglass instead of aluminum plate for router table