What features to look for when buying a router lift?

I recently discovered the existence of a thing called a router lift, in answers to this question. I'm intrigued and would love to get one.

A bit of internet research later, and I see there is quite a bit of variety, not only in price, but in basic feature sets.

Assuming I would like to purchase (rather than construct) a lift, what features seem to be important to you? For instance:

If it is important to answering the question, I have a DeWalt 625 plunge router (as long as my frustration with fine-setting bit heights hasn't caused me to throw it through the workshop wall).

For what it's worth, your DeWalt 625 will not work with most router lifts on the market. Most lifts are designed to work with a removable motor from a fixed-base router, and you'll need to look into a different solution such as one of those that I suggested in my answer to other router question that you referenced. The DeWalt 625 is a plunge router with an integral, non-removable motor. But for the sake of argument and the benefit of others, let's pretend you also have another router which is compatible with most lifts.

Strictly speaking, the only feature most people need from a router lift is the ability to easily raise and lower the router by very small increments.

Let's address a few of your questions about specific features:

Do I need a "quick change" ring to facilitate bit changes?

If you're referring to the red rings in the illustration below, these are important not just for changing bits, but to use different-diameter bits. You want to give your workpiece as much support as possible as it passes by the bit, so you should use the smallest insert ring that gives your bit adequate clearance through its entire height range.

Many router lifts include a router table insert plate (the gray rectangular flat piece) with insert rings, but some do not. You can also buy router plates with or without the rings, or you can make your own. For this reason, I consider this part not so much a part of the router lift, but an accessory that you can add separately. That said, the mounting plates included with some of the more expensive router lifts do have additional features such as precision markings or easier adjustments. 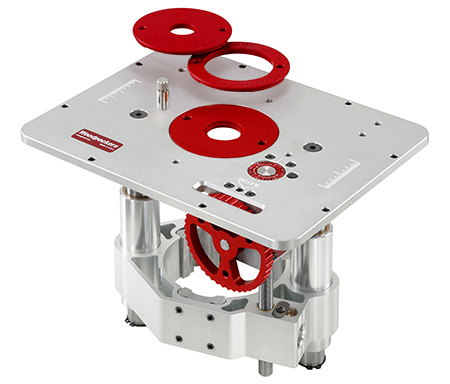 Do I need to be able to lock the lift to a particular height?

I could be wrong but I would suspect that this feature is included on most commercially-available lifts. This is good to have in order to guarantee that your router won't drift up or down with vibration and use, but it depends on what's more important to you and whether your specific lift has a tendency to travel out of adjustment with use. Is it more important to be able to change settings quickly, or to keep the same setting for a long time? Whether or not you use the height lock may also depend on the job. If you're producing mating parts with tight tolerances, you may want to lock the router height. But if you're just cutting an ogee or roundover as a cosmetic detail, and your lift more or less doesn't go out of adjustment on its own, you're probably fine.

I just use a Bosch fixed router base as my lift and haven't had a problem. I would suspect most screw-driven lifts hold their settings pretty well, but if you find a router lift that has a lot of slop in its adjustment mechanism, you'll probably want to lock the height once you've adjusted it.

As with many tool features, this is largely a convenience since you can have a "remote" adjustment crank or knob on the side or your router table. You don't have to potentially move your workpiece out of the way to make an adjustment.

My good router came with a fixed base designed to operate as a basic lift, after drilling additional holes in the plate. It does have some nice features in that mode:

When the motor is lifted all the way, the shaft stop automatically engages as the collet comes above the table surface, permitting bit changes without having to reach underneath. There's a stop which keeps this from happening accidentally that stop is also released from above the table (thru another hole). Above-the-plate bit changes are much more convenient. If your router doesn't have that built-in, there are extended collets/chucks which can be added on.

The height lock clamp can also be operated from above the table (third control hole). You do want a height lock. Any mechanical system is subject to hysteresis and slippage, but the simpler the system the less it's likely to drift over time. A clamp's simpler than screw threads and will stay put when vibration might cause the lift crank mechanism to drift. This may not matter for two boards but probably does for 20...

Something I don't like is that, since this base has only a single threaded rod at one side as its height control/lift, it doesn't lift as smoothly as I'd like, making micro-adjustments somewhat annoying. Lifts with multiple threads, or the poor-man's lift of a plate on a threaded rod that simply pushes the router up along its centerline,, would work more smoothly.

Flex shaft drive does stay out of the way of any workpiece you may want on the table to compare bit height to, but so far the through-holes approach sorta works. I do wish they'd given me a crank handle rather than a knob, but Oh Well; I'm really never in that much rush.

13
Is a plunge router suitable for router table work?