What is the purpose of a saw set?

I do understand what the set is but I suppose I have some questions about its purpose.

I was watching a video by Paul Sellers and the focus was sharpening saws. The video was very informative in that regard and towards the end the topic turned to saw setting.

He showed, using a tool, how to set a saw. After which he showed how to reduce the set with a hammer.

I read that having a proper saw set reduces the chance of the saw blade buckling. At the end of the day:

I read that having a proper saw set reduces the chance of the saw blade buckling.

One purpose of set is to reduce the chance of a saw binding in the kerf. This can lead to buckling, but with some saws it would be nearly impossible for them to buckle in use (a quality backsaw for example, due to the added stiffness provided by the sawback).

Saws with no set can also be described as having '0' set.

Set is not the only way to help prevent binding. Not used as much today, a saw can be made with a tapered blade: thicker near the cutting edge and slightly thinning towards its back.

Either method is particularly needed for rip saws, used for cutting along the grain. During ripping cuts pinching of the saw by the wood is common and starts to become more and more likely as the depth of cut increases (especially once the cut depth exceeds the blade height).

Note: even with set binding can occur so on long rip cuts or when re-sawing by hand it can be necessary to keep the kerf open with a small wedge near the start of the cut: 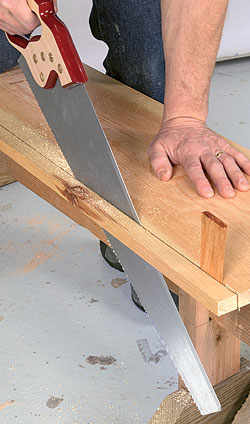 The other purpose of saw setting is to improve cutting performance (especially for crosscut saws). In addition to an improvement in the actual cutting done by the teeth, any saw with a flat blade and no set will naturally experience increased friction within the kerf so more effort will be required during sawing.

Would there be a reason to remove it permanently?

Yes, it is not advisable for general-use saws but can work well for certain specialist applications.

Some specialist saws are manufactured with no set, for example flush-cutting saws. When sawing flat against a piece of wood any set on the teeth will tend to scratch the surface, so no set is very desirable on such a saw. Often the teeth have no set at all, but occasionally will have '0' set on one side only; for this type of saw care must be taken to have the side with set facing upwards.

You can also modify a saw for a particular purpose — very fine, shallow, finished cuts for example. As noted previously binding is increasingly likely as the depth of cut increases, which is why no set can work for shallow cuts that don't exceed the depth of the saw blade (also especially on crosscuts where there is less of a tendency to bind anyway). Regardless of the type of cutting being done, because of the increased friction regular lubrication of the blade with wax is advisable.

Setting the teeth has a few benefits:

It creates a kerf wider than the body of the blade, which does indeed reduce the chance of a catch / buckle- this is nominally more important in western-style push saws than in japanese-style pull saws. You can stil have a bound blade if there are stresses in the wood that tend to cause the kerf to close.

A wider kerf also is less likely to clog with debris.

Secondly, teeth set at an angle are slightly more efficient at cutting- slicing rather than scraping.

As to why you'd want to remove it? A thinner kerf would be my first guess (though that's all it really is.)

Not the answer you're looking for? Browse other questions tagged hand-saw tool-maintenance or ask your own question.

10
How should I treat the internals of my table saw?
13
How do you reliably set all your jointer knives to the same, correct height?
2
To change a blade on a table saw, do I pull the wrench toward the front?
2
Using a coping saw with 1/4" wood sheets
6
What makes a hand saw great?
10
What should I do to maintain a saw blade?
1
What frame saw can I use to mill small lumber?
2
How to saw wood without the final splitting?