How to smooth out grain texture from shellac?

I sanded the surface to 320 before applying shellac, it was quite smooth to the touch. Unfortunately, right away with the first shellac coat, a grain texture formed, worst in the darkest species. I thought maybe with application of some more coats it would smooth out, but that doesn't seem to be happening.

I tried sanding it lightly with 220 grit paper, and while it did improve it somewhat, in virtually no time I was exposing bare wood again so I'm limited in how to deal with it that way.

What would be the best way to smooth out the surface? I've seen information about rubbing out as well as french polishing, but I am not sure what best applies to my situation. 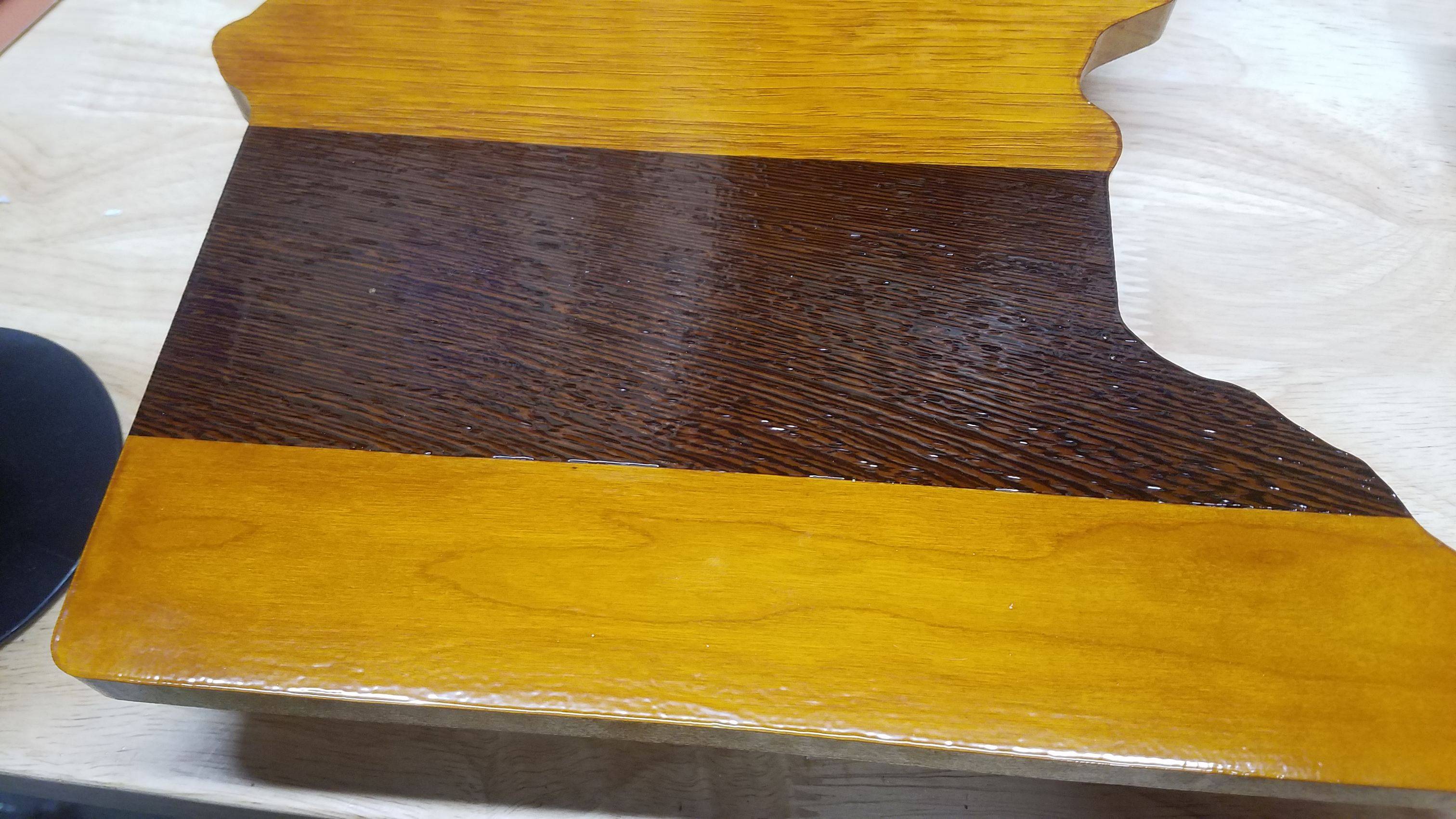 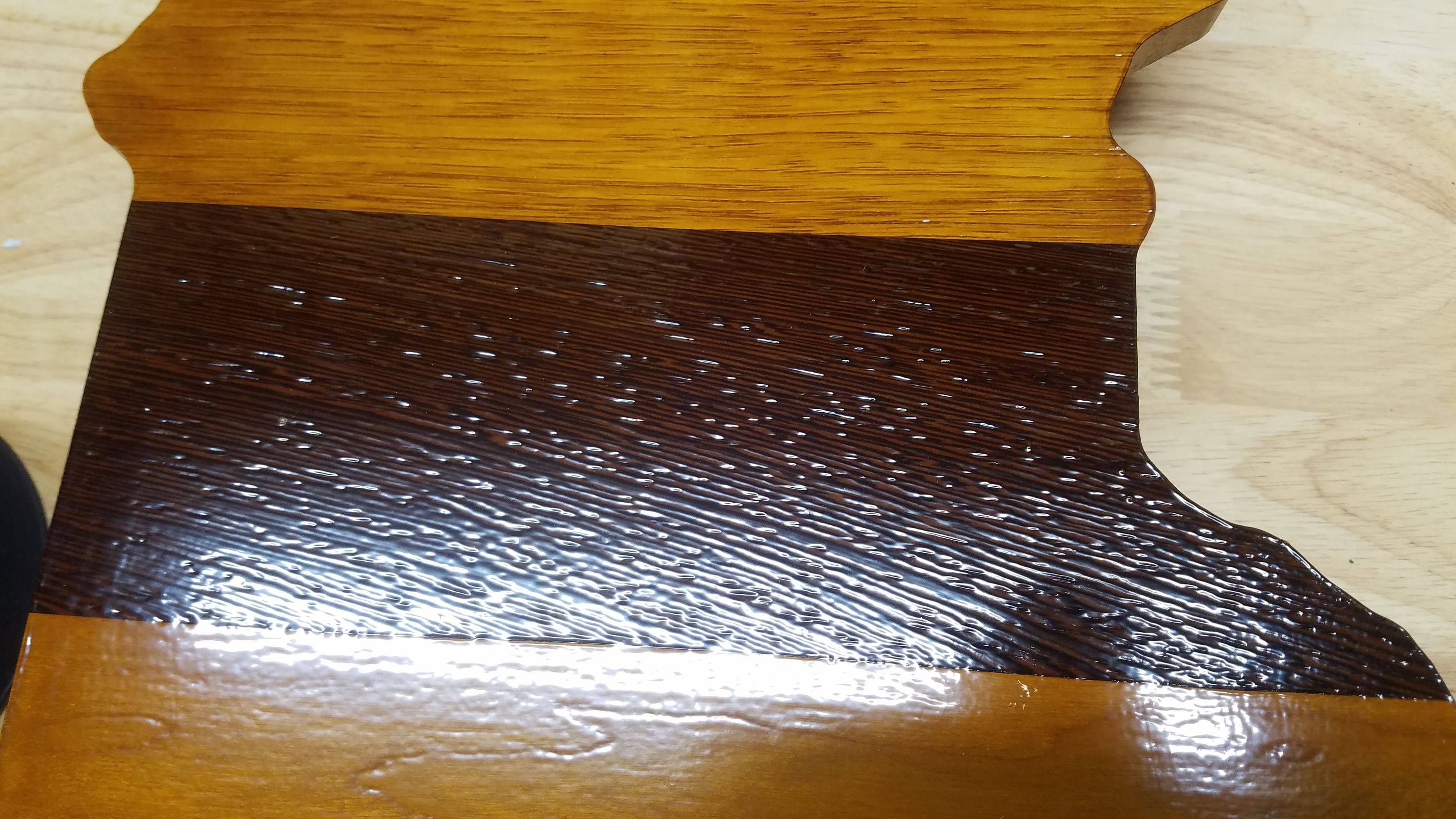 I thought maybe with application of some more coats it would smooth out, but that doesn't seem to be happening.

If you were French polishing it could if you took it far enough (i.e. spent enough time on it!) but very broadly speaking grain was filled before application of shellac started, and this would have greatly lessened what you're seeing here I think.

What would be the best way to smooth out the surface?

You have a few options. The first is to sand back a little or a lot right now, then continue applying shellac.

The second is to begin applying shellac again, until it basically smothers the grain irregularities. It's hard to tell how much would be enough without at least a little sanding, but you would normally be abrading slightly at some point in the process and it can be now, later (at a certain stage during the buildup of coats) or basically right at the end when you are perfecting the surface.

Personally I'd have no hesitation in sanding this back now then applying more shellac. Not least because it will give results you can see immediately, which is reassuring, rather than having your fingers crossed that later on a certain amount will do what you want, with the ever-present risk of sanding through somewhere along the arrises and especially at the corners.

Here, by sanding back I mean sanding until all or virtually all of the texture is gone; which will mean exposing bare wood. You want to back the abrasive with a hard block to help keep the surface as flat as possible as you sand.

I sanded the surface to 320 before applying shellac

This is unnecessary when applying a film finish. Because a film finish literally builds a film on the wood — the surface of the finish becoming the final surface — you can generally stop at around 180 grit, and sanding further yields no benefit. And in some situations you can actually stop sanding at 150 without sanding texture being evident after finish application, and without the final result looking visibly duller or anything like that.

Just continue to do a light sanding with 120, just to knock off any fuzziness, then continue with adding more coats of shellac. Don't use a paint brush, but instead use an applicator pad which you make them by hand. The awesome thing about Shellac is that you can add more coats without sanding because the thinners that is used allows the base Shellac to basically melt thus allowing the new coat to mix with the old coat, regardless of the age of the original coat. It is not like polyurethane clear coat, where is must be sanded to bond with the old coat or the last coat, of polyurethane, that was applied.

Go to YouTube and watch this fellow, he is amazing and extremely knowledgeable and experienced in finishing wood, among many other items. Go to the following YouTube link:. https://youtu.be/xErUsgT7f4M

Not the answer you're looking for? Browse other questions tagged finishing sanding shellac or ask your own question.

13
Leveling a finish/finishing the finish
4
Should I use solid color wood stain or paint for my project?
1
How should I polish and finish this table top stained with Minwax Polyshades?
5
Are Oil finishing and Oil polishing complementary?
5
Wood Still Rough After Finish
6
Lacquer, persistent brush marks
4
How to get an even sheen with wiping varnish?
5
What's the best process for sanding/finishing reactive stained oak floor with hardwax oil to leave the best surface?
3
Dealing with Pre-Stain and Wood Conditioner Residue
2
Refinishing a scratched mahogany veneer vanity