Blade rookie here. I have a 1.5HP table saw with a 10" blade. The blades I have been using are fairly new higher tooth finishing blades, such as the Diablo 1060X. To avoid the friction burns when ripping and cross cutting 3/4" birch, I started having to cut only an 1/8th" deep at a time, raising the blade between passes. I'm looking for advice on which blades to help make my process more efficient, as I have several hundred cuts to make.

A lower tooth ripping blade (Diablo 1024X) sounds like it'll make rips cuts much quicker, and I'm led to believe that the edge will actually be quite smooth. I would love to have as close to finished edges as reasonably possible. This blade sounds like a no-brainer to try.

But I don't see any specialized crosscutting blades. What's my best bet to make these more efficient? With such a hard wood, would I always be expected to need to make multiple passes in a 3/4" board to avoid burning?

Edit: I'm cutting 200 6"x3"x3/4" blocks of birch. Planning to rip ~7" wide boards to get the 3" wide dimension, then cross cutting to the 6" using a sled. (Whenever I use my miter saw, even with a stop block, it ends up grabbing and moving the piece slightly at the start so the cut isn't perfect.)

Your situation could be a couple of things. First, whatever you're using to brace/hold the workpiece as it meets the blade is not 90 degrees to the blade. That could mean your blade is not parallel to the miter slot (which is most likely) or that you're using the original miter gauge to support the workpiece and its slide bar is loose in the miter slot which lets the piece shift.

If you are using a cross-cut sled, then it's almost always the blade being out of parallel. Occasionally it happens if the workpiece moves as you push the sled, but that's easily resolved by gluing a piece of sandpaper along the bottom of the rear and using clamps to hold the workpiece.

Aligning a blade is a right PITA, but it is worth the time and effort. You ought to be able to find at least one youtube video of someone aligning a blade for your model saw or a procedure in the saw's manual.

The last thing is not cutting fast enough :-) You don't want to try and jam the wood onto the blade, but you shouldn't dawdle, either.

I would start by getting a micrometer and making sure the blade is exactly parallel to the miter slot. If it's slightly off, the back end of the blade will hit the wood and burn it.

Two, are you using a splitter to hold the piece open as you pass the piece through? Without a splitter the wood can close up on the blade and the back end of the blade will be pinched and burn.

Three, what's the application for this? Hundreds of cross cuts is probably better cut on a miter saw with a stop block than on a table saw, plus you'll get exact duplicate parts each time.

Aside from ensuring that your saw is set up correctly (e.g. that the blade is parallel to the bed and fence of your saw table), it's important to be aware of the different types of blade and how they will affect the cutting performance and finish. Ideally, you will use a ripping blade for ripping cuts and a crosscut blade for cross cuts - it's not just the tooth count that's different, the tooth geometry, rake angle etc. are different too: 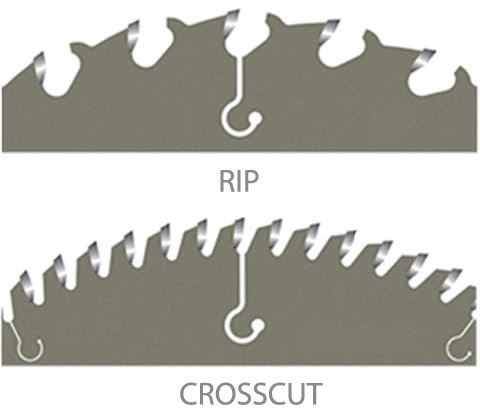 There are also "Combination" or "Universal" type blades which are a compromise between the two types - they don't perform as well as a specialised blade at either operation, but they will perform better for ripping than a dedicated crosscut blade and vice versa. This is good for if you have to regularly swap between operations, and/or swapping blades often is not practical.

Note that within each category there are different blades also, with different materials, tooth counts and configurations, geometry, rake angles etc. - it's a complicated subject.

For more in-depth information you could do worse than trying to talk to a circular saw manufacturer's rep. Describe what it is that you're doing and they'll help you pick the right blade.

Since it wasn't touched on in the Question and hasn't been addressed since do make sure your blade is clean. If you've been cutting a resinous wood, or certain sheet goods, the blade could have resin buildup on and around the teeth and this can significantly affect cutting performance. I wanted to lead with this as you mention you're a blade rookie so you might not be aware of this issue yet.

Assuming your saw is set up adequately there are a few things that could improve results, without having to look at a new blade as a fix. Although a purpose-made blade for the cut being done is undeniably the best thing to use for specific cuts in hardwoods. This is why they're made after all.

Do every cut twice
This sounds like a big hassle but you'd soon get used to it, and if a greatly improved cut surface is what you want and is achieved it is obviously worth it.

The first cut is slightly outside of your line, then you reposition slightly and make a second pass that basically just makes dust. Something similar is done in router work if going for a high-end result, the second pass sometimes referred to as a 'dust pass'. In addition to removing any scorching this can produce a really excellent surface, far better than you might guess.

However, some scraping or sanding should still be expected to produce the best finish possible which is my next point...

Expect to have to clean up the sawn face
For show surface it's not unrealistic to never use an edge directly from the saw. Always intend to sand, scrape or plane after sawing. This is good general practice with any cuts, as well as with all shaping done with power tools — after all, one shouldn't even use the surface left by a planer or jointer and those should be far far better than produced by even the best table saw.

Just to emphasise, this applies to show surfaces. The standards are/can be different for surfaces that won't be seen in service, and joint faces.

I'm also pretty much pushing the thing as fast as I can.

That's too fast. Let the saw do the work.

This is basically a universal principle in all sawing, and it also applies to other power tools. You can get awful results with a router for example by pushing too quickly, or too high a feed rate as it would usually be said. With no changes made to the setup except for slowing down to the ideal feed rate you can get a really nice finish.

The exact speed to use will depend on species, grain and cut direction, bit type and some other factors, so some experimentation may be required.

Not the answer you're looking for? Browse other questions tagged table-saw hardwood saw-blade or ask your own question.

8
Can a track saw make glue-ready surfaces?
6
Table saw technique, cross-cut dados on multiple boards
14
How can I make precise corner or notch cuts on the edge of a board?
4
Bad technique vs inadequate equipment for beginner woodworker
1
Table Saw Challenge: Making a Sled for a 2' Circle
0
Considerations for cordless circular saw blades - effects of kerf, coating and geometry on performance?
1
table saw cuts rough on left side, clean on right
5
Is it safe to use just the chippers in a dado stack?