Building A Table - Help With Wood Selection and Joints

I am wanting to build a table that will hold a Large Big Green Egg grill. I've created a mock up using SketchUp (Just learned how to use it today, so it is kind of rough)

My design is based on a youtube video I saw and it looked like the video used 2" x 2" wood. Those are the dimensions I used for my mock up.

Third Question: Is a Mortise and Tenon joint the best joint to use? I used one for the mock up and Tenon will have to be trimmed, is that okay or should I change my dimensions. 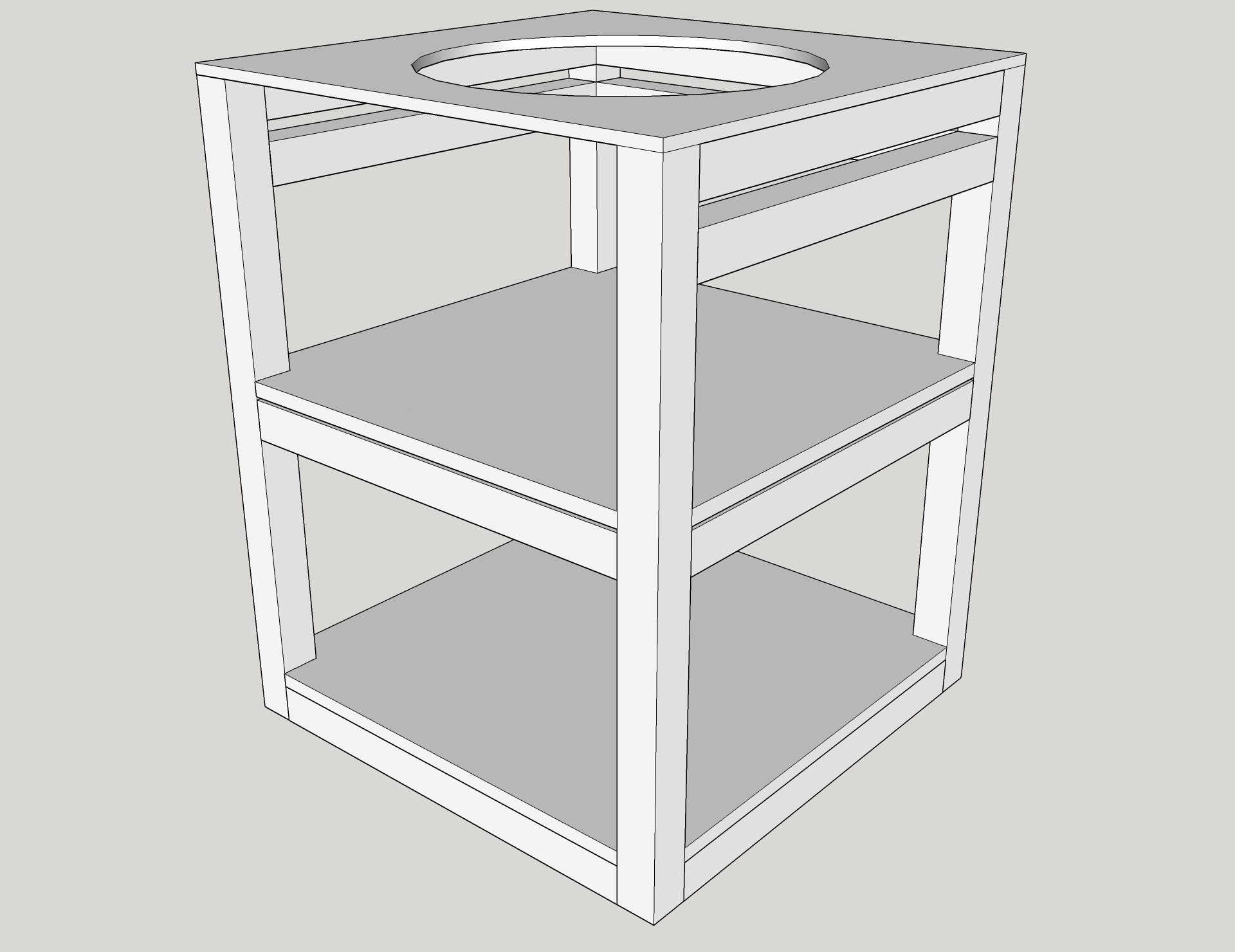 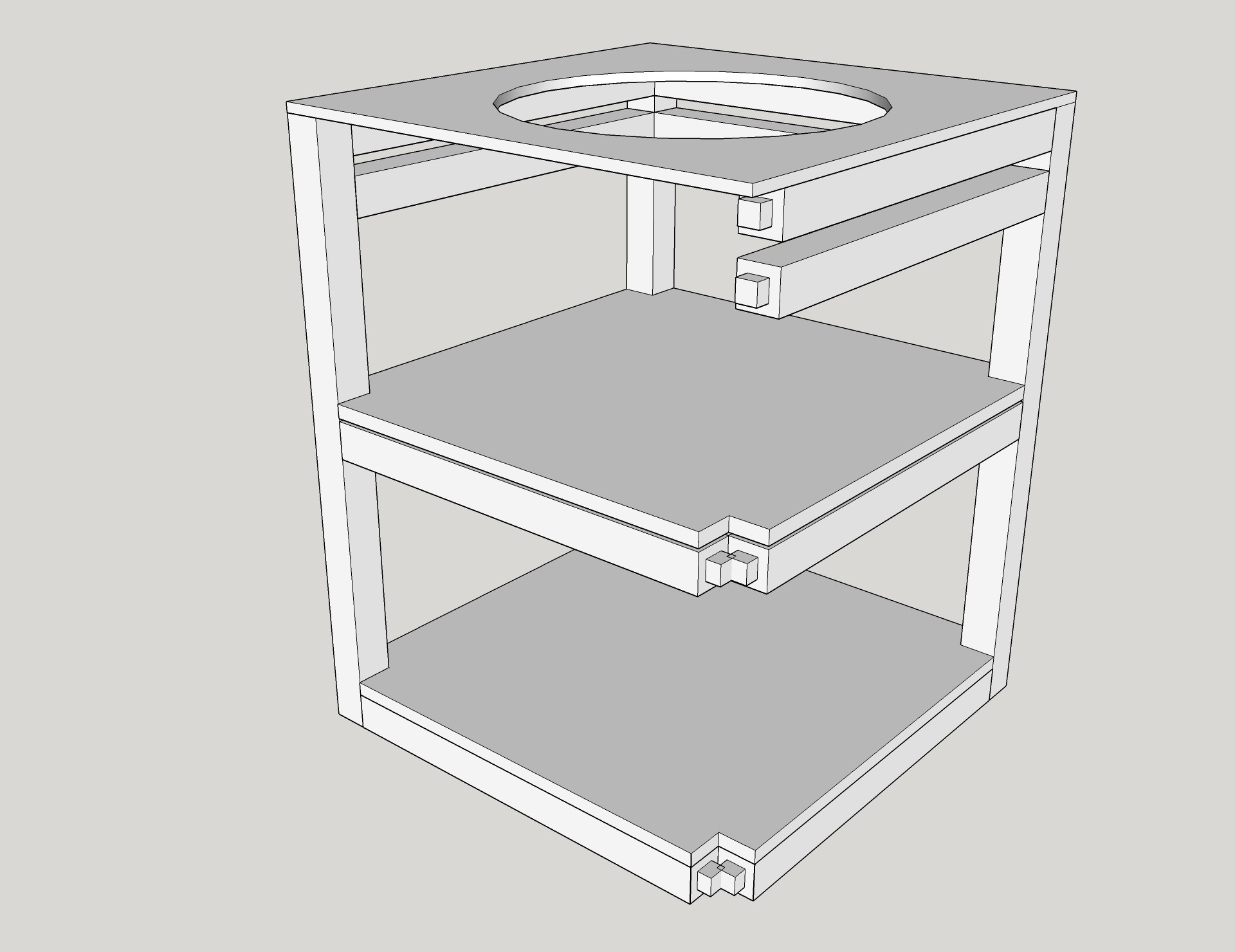 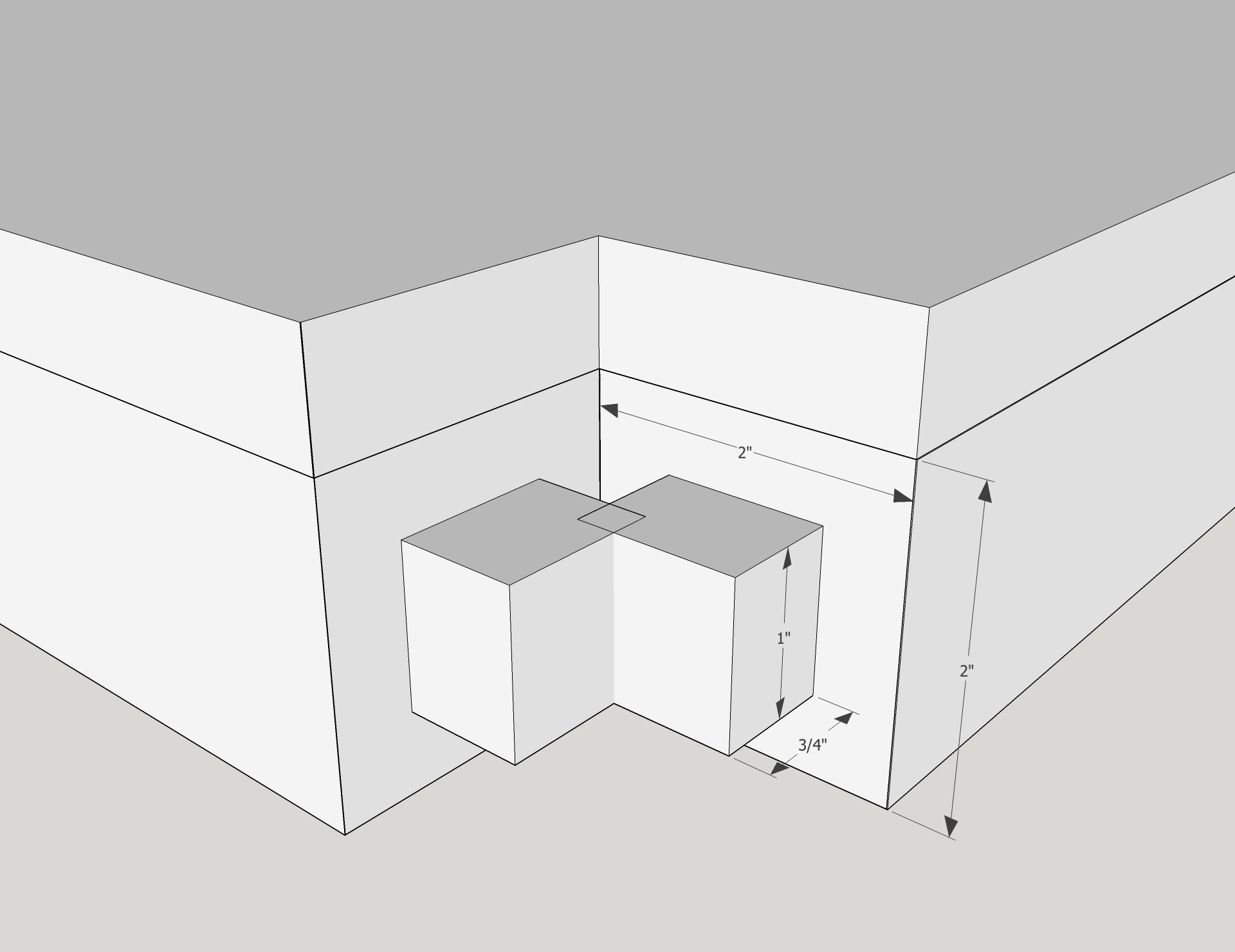 First, I would avoid any pressure treated wood around anything having to do with food preparation - the chemicals that go into that wood are often poisonous.

Redwood or cedar would be good choices for anything outdoors, as would cypress, white oak, and teak, but they are more expensive and harder to source.

As for the joinery, mortise and tenon is a good, strong joint, but only if it is made correctly. You would need to use a waterproof glue such as Tightbond III or epoxy.

Another option for the joinery would be to use pocket screws. They sell outdoor rated pocket screws, and most of the joinery could be hidden with your design (cut the slots in the bottoms of the cross members). Pocket screws would be much faster and not require quite as much precision to get a solid fit.

It depends on whether your food and utensils will ever come in contact with the wood. For example, if you always put your food and utensils on a tray, you don't need to worry about the food safety of your lumber, and pressure-treated lumber would be fine. However, you could use any type of lumber and treat it with a UV-resistant finish, or you could use a naturally rot-resistant wood. Although species is not the only factor that determines rot resistance, it's a good place to start, as discussed in an article on garden.org:

Third Question: Is a Mortise and Tenon joint the best joint to use? I used one for the mock up and Tenon will have to be trimmed, is that okay or should I change my dimensions.

There are numerous joints that would work in this application, from pocket joints as suggested by LeeG, to lap joints (including the fancier dovetailed lap joint suggested by Graphus), to simple butt joints reinforced with dowels or biscuits, to even the most exotic joints. You could even move the legs to the inside corners of the corner joints and use classic dovetails rather than making the legs integral to the corner joints.

Mortise and tenon joints would also be fine, but probably wouldn't work very well as pictured in your illustrations. The critical factor in determining a mortise and tenon joint's strength is the effective width of the tenon--the distance your router would travel when you cut the mortise (if you were to use a router).

If I were using mortise and tenon joinery on this project, personally I'd replace the horizontal parts with 1x4s, decreasing the thicknesses but increasing the widths of your tenons (and, consequently, your mortises). This will allow you to offset the mortises further toward the outside, in turn allowing you to cut slightly deeper mortises without any interference from the tenon that goes into the mortise on the adjacent face. As an added benefit, the wider and longer tenons will produce more long-grain glue surface.

If you want a purely mechanical joint and don't want to use glue at all, you could either drawbore your mortise and tenon joints or each corner joint could use a combination of an interlocking tenon with a tusk or wedged tenon. Just within the realm of mortise and tenon joints, the possibilities are endless--it's really all about your personal preference on this project.

I can't tell if you mean a common size for this type of project which I wouldn't know, but it's perfectly acceptable for what you're doing.

Yes, this is the difference between nominal dimensions (1x2, 2x4 etc.) and the actual dimensions of the milled wood. Wikipedia's entry for lumber is fairly comprehensive and covers nominal sizing in sufficient detail.

This is up to you, based on cost apart from anything. Woods that naturally weather well with outdoors exposure would be a good choice here, many are very attractive woods but they tend to be expensive and could drive the cost of the project up significantly.

Pressure-treated lumber on the other hand is an inexpensive species treated to be resistant to rot so very cost effective. But it tends to look like what it is.

Third Question: Is a Mortise and Tenon joint the best joint to use?

There's no one best joint to use. It's a very good joint and very strong, but tricky and time-consuming to make. Accuracy is key with mortise-and-tenon joinery, if you don't end up with a snug fit of the tenon within the mortise it will significantly affect the strength if using conventional wood glues.

If the fit is tight polyurethane adhesive would be a good pick as they offer extremely good water resistance.

If there's a sloppy fit epoxy would be the adhesive of choice.

Tenon will have to be trimmed, is that okay or should I change my dimensions.

It's fine and won't affect strength were you to go ahead with this type of joint and not go with the pocket screws recommended in a previous answer.

If you would prefer not to use mechanical fasteners and would like a joint a little less challenging to form, consider switching to lap joints. To add extra strength and stability a dovetailed lap joint would be an excellent version to use: 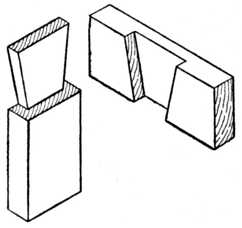 To answer the last part. I agree with LeeG above - mortise and tenon is overkill here in terms of skill vs. utility. Unless you've got some experience with it, cutting those joints will be frustrating at this point. You're much better off with pocket screws.

Even waterproof glues can fail when the wood is exposed to a lot of moisture - seasonal expansion and contraction, and water soaked into the wood call take their toll on joinery. Pocket screws would be robust to that, and could be retightened were they ever to come loose.

Finally, trimming those tenons to fit against each other will not significantly weaken the joints.

Not the answer you're looking for? Browse other questions tagged joinery technique lumber furniture or ask your own question.

6
How to setup joint proportions?
6
Cutting tight miter joints for a frame around an existing object
4
Mortise and Tenon for shed wall framing
4
Tenon dimensions and orientation
2
Fixing mistake: Filling the gap in a breadboard end on tabletop
1
What knock down hardware can I use on this platform bed frame?
2
Reusable Desk design: how to join pieces?
3
Design: Creating a table with removable center/top
2
Help a novice with warping pine wood boards