What strong options are there to join these pieces?

I'm planning to build this table base which consists of 4 legs, 2 leg-to-stretcher pieces, and 1 main stretcher. The leg and leg-to-stretcher shapes will be cut on the bandsaw, and will support a solid wood top with similar thickness.

What's a strong way to join all these pieces (or should I rethink the design)?

My first idea was simply dowels, but I find dowels hard to align properly and don't see them adding much strength. I don't have a domino joiner. The surface area is too small for a biscuit. Is something like a tongue and groove joint the right idea, and if so on what plane?

For scale the height is 15", the wood thickness is 1", and the cross sections to join are 1"x1" and 1"x2". The grain will be running approximately vertical for the legs, and horizontal for the rest. 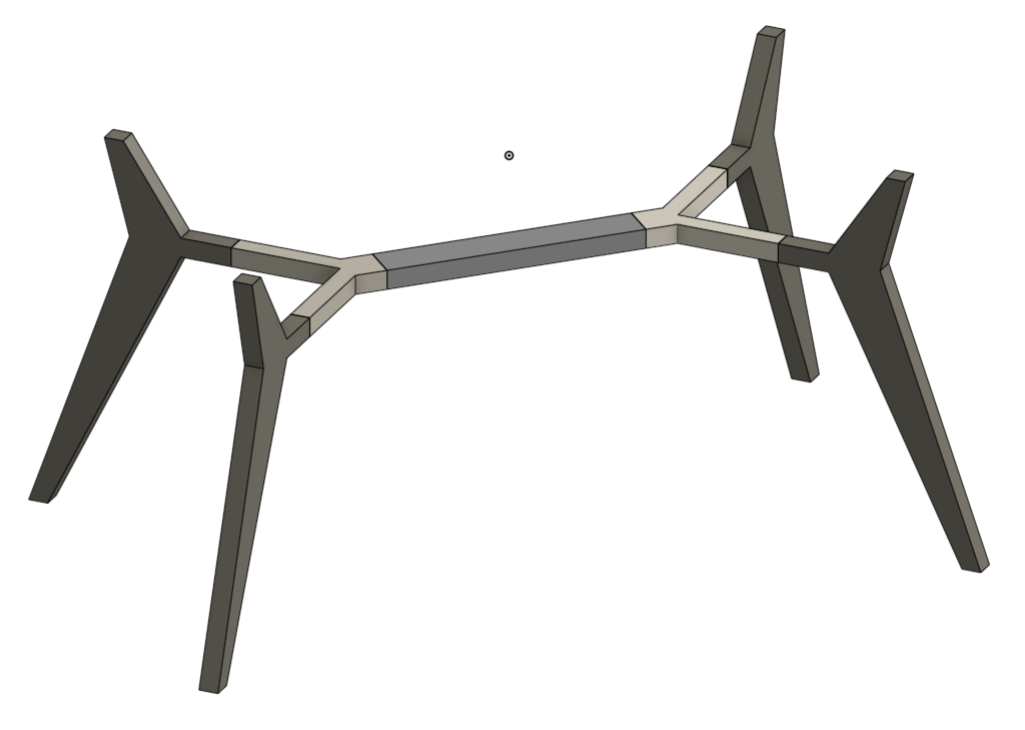 Edit: To complicate things (and justify the cut-off points) I've added fillets to the design: 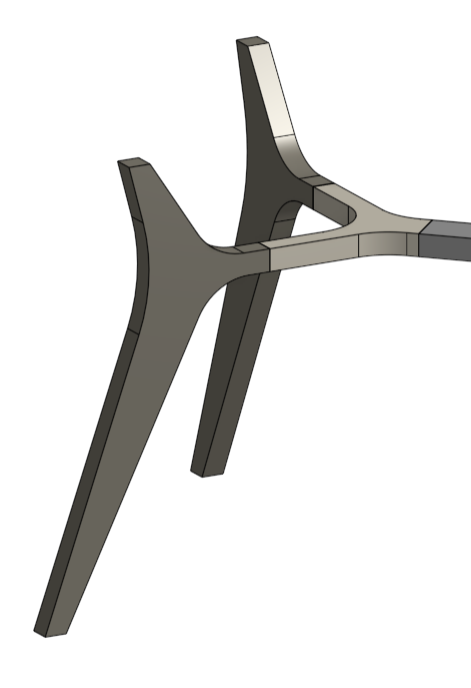 OK first off I don't think you need to redesign the overall leg assembly, there are many tables somewhat like this out in the world. And it should be borne in mind that this is just the base for a coffee table, it doesn't need to be that strong. However, I believe you do need to rethink certain elements.

Other than the joints which we'll get into below there are two elements I think you have to change.

The first is the Y-shaped piece. In a single piece of solid wood there's no way to align the grain and make it strong in each of the three directions, unless you somehow managed to find suitable pieces of tree where two branches meet the trunk to cut these from1. So you either need to use plywood or a lamination of some kind, or build these up from pieces so each limb will have grain running along its length.

The second is the projecting piece of each of the legs, this would have "short grain" and would be very weak. The leg-to-stretcher piece needs to be extended so that it spans the entire gap to meet the legs, probably joining the leg at a small flat surface. This also makes the legs easier shapes so they'll be much more straightforward to cut.

What's a strong way to join all these pieces

Other than butt joints reinforced in some way you have numerous options here.

You could do mortise-and-tenon joints, that could be one of the strongest ways to do this but a fair amount of work. You might consider doing a M&T for the join between the legs and the Y-shaped pieces, but decent dowel joints at those locations would be just as strong and much easier (see final footnote).

Finger-jointing of some kind is a possibility2, something like this from a previous Answer, but I think you can do better and save having to buy a potentially expensive and little-used router bit.

Halving or half-lap joints would increase strength somewhat, and can be further reinforced by cross-pegging, driving in a screw or screws or angle-nailing. This is the simple option I think you should go with IF you don't go with dowelling of some kind. Remember that to allow for the laps the stretcher and the corresponding projection of the leg-to-stretcher part would need to be made longer than in the current design.

I hesitate to add it but I suppose it needs to be included given their current popularity, you could use pocket-hole screws. And with well-cut ends (perfect 90s, very smooth), the end grain sized ahead of time and enough glue applied at final assembly I'm sure they would prove sufficiently strong in service.

My first idea was simply dowels

Dowels would definitely help reinforce simple butt joints here. One centrally placed dowel can't do much to prevent rotation so some guides might suggest using a pair of dowels, but the small section of the pieces you're using I think argues against this and one beefy central dowel is almost certain to prove suitable given the actual requirements of such a table.

but I find dowels hard to align properly

Good layout, careful drilling and simply practice could all help here :-) You can give yourself a leg up by using a drill press/bench drill, or a commercial or homemade dowelling jig, to drill all the components rather than drilling them by hand and eye.

Another alternative is not to worry too much and deliberately drill the hole in one or both pieces overlarge, so perfect alignment isn't an issue. Then you glue the dowels into one or both parts using a gap-filling adhesive (e.g. epoxy). This is what I'd advise doing here if you have any worries about being able to drill perfectly aligning holes.

and don't see them adding much strength.

This doesn't need to be that strong, but short lengths of hardwood dowel can be immensely stiff and add hugely to joint strength3.

And, dowels don't need to be made from wood. They can be metal, something that is becoming more common in certain woodworking applications with the wider use of epoxy which allows for very strong wood-to-metal joints.

1 This isn't as silly as it might sound, in the past many such shapes were done using the natural branchings in trees and in some areas of woodworking this is still done today.

2 Commercially that's what might be used in a similar design since they could mill the ends of the pieces apply glue and get them clamped together in double-quick time.

3 One thing to bear in mind is that the cross-sectional area of dowels can be similar to that of tenons and we don't tend to worry that tenons are weak as a rule. And in comparative destructive tests dowel joints always do well, sometimes exceeding the breaking strain of M&T joints!

2
Joining 3 wooden cubes with swivel joints
12
Quick corner joints in practice
4
Are these work desk joints strong enough?
1
What knock down hardware can I use on this platform bed frame?
3
Loft bed design
2
What are the potential issues with this bench design?
3
Need help with design of entryway bench joinery
3
Strengthened leg miter joint with spline [key]
3
How big hole can I drill in edge of plywood?