How to address a failed glue up?

I'm working on my first major glue up, and I noticed a failure to bond properly along the edge of the outer board, see picture below. I did some research, and I can think of a number of things I did wrong that caused this -- not enough glue, not using scrap pieces to spread out the pressure, not using freshly worked faces, working too slow, etc. My question is, what do I do now?

I don't have access to power tools, so simply cutting off the offending board on the table saw and starting again isn't really an option for me. 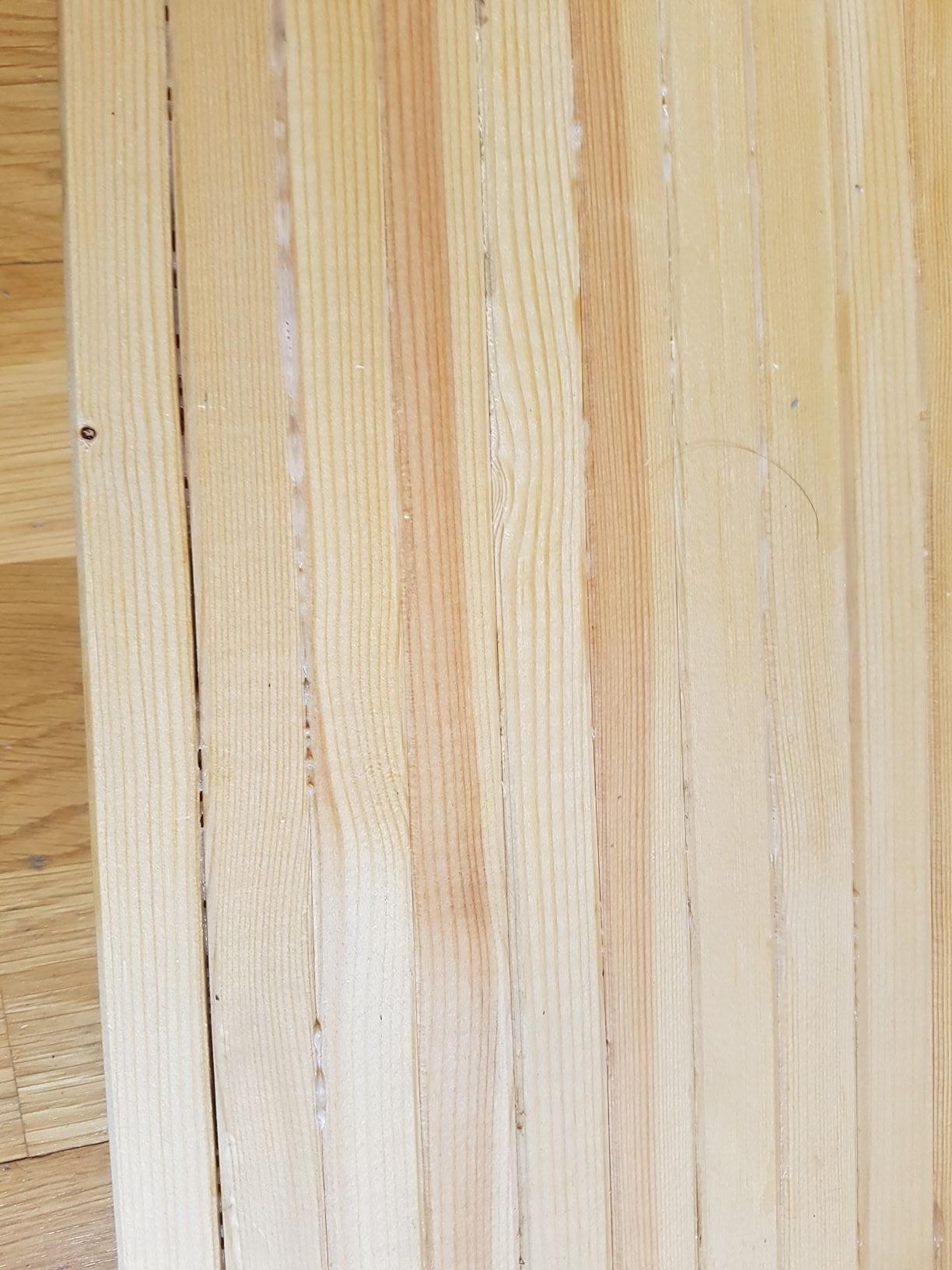 You're in luck here in that this is just with the edge board, it would be worse if it were one of the joints somewhere in the middle. It's hard to be sure from just the one pic but it does look like a couple of the other joints aren't great either which is sort of to be expected, but lots of not-very-good glue joints1 give decent enough service so this could be no problem.

Obviously you know this would be a ghetto fix and anyway this won't work. The existing dry glue in the gap will physically hold the two surfaces apart and prevent a good glue joint from subsequently forming.

This is a reasonable idea but DA is the wrong solvent.

So, what to do now?
As bad as this looks and as weak as it will be (relatively) you may be able to get away with it depending on what this is for.

If you really want to get this off you can take advantage of this being a weak joint and just prise the two pieces apart. One or two flat-head screwdrivers or a couple of hardwood wedges would probably do the trick without too much difficulty. Bear in mind the amount of effort needed to get a lot of dried glue off the edges once you do separate them, this can take a lot more work than you anticipate if you don't have the right tools on hand.

So if you end up just leaving it you have a good number of options for filling the crack. If it's only visible on the underside I'd just ignore it, nobody else will know it's there and out of sight you'll probably forget about it yourself eventually.

1 Arguably the majority of glue joints done by weekend warriors and leisure woodworkers aren't as strong as they could be due to two factors. The first is because of the widespread, but largely mistaken, belief that clamping too hard can lead to starved joints. The second is that PVA is the most widespread glue used in woodworking and this requires high clamp pressure to achieve a strong joint!

2 Rollers are good. A notched plastic spreader can work well too, old credit cards or store debit cards are great candidates for conversion to spreaders (useful for both glue and some finishes).

I think Graphus's answer is pretty much right on, but I want to give you another alternative in case you're not interested in tearing the whole thing apart.

You could reinforce the joint with a gap-filling adhesive, such as epoxy. Unfortunately, I don't think you'll get a good bond to the dried glue surface, so I think you'd have to remove it somehow.

I think the easiest way to get a fresh surface would be to drill holes slightly bigger than the gap every few inches along the failed joint. Then get a good two-part epoxy (I like Entropy or West brands) and use a disposable syringe to "inject" it into the holes.

If you want it to look nice use enough epoxy to make the whole thing flush. Depending on the filler you use you might also want to tint the epoxy with some dye. If the gap goes through to the bottom of the piece you will need to cover the joint with tape beforehand so the epoxy doesn't just run through.

Woodworking is an art and a science.

With the amount of glue you have in that joint, it's more likely that the wood will break instead of the glue joint failing. There is no reason to remake this. 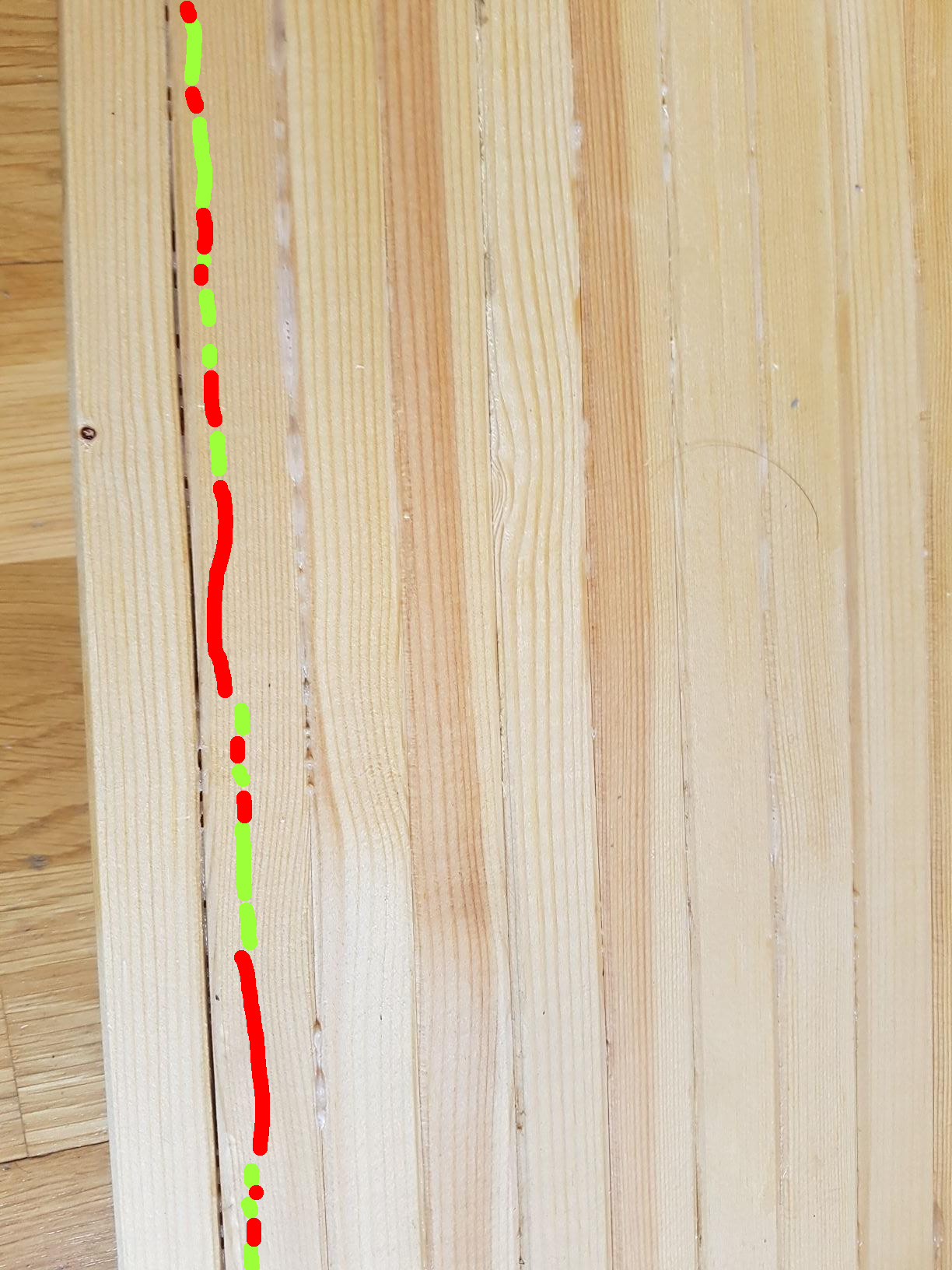 I manually annotated this image to show where the glue joint has closed. It looks like the glue joint is only 44% closed. % closed = green_area / (green_area + red_area). Wood glue has a holding strength of 100-300 lbs/sq-in in soft wood. Several square inches of this glue joint have closed, so it should be much stronger than the two wood pieces that it joins.

What do I do now?

Make it look better. Mix wood glue and sawdust. Push the mixture into the joint. Use a hand-plane or sandpaper after the mixture dries.

Not the answer you're looking for? Browse other questions tagged gluing or ask your own question.

3
Will PVA glue add some thickness to two and more pieces of plywood?
2
Redo glue joint
5
Panel Glue up Question
2
Walnut drawer sides: Is it wise to glue-in the plywood base?
2
What are the best ways to glue thin edges?
3
Does a “butcher block” glue-up behave like quarter sawn?