How can I create artificially spalted wood?

Spalting is any form of wood coloration caused by fungi.

I am most interested in spalted maple, as shown in this image: 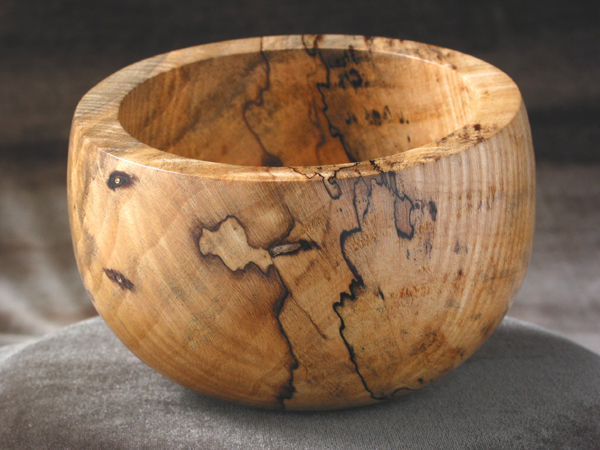 How can I create spalting artificially? I would like to take either a raw board, or a finished piece, and somehow "spalt" it, under controlled conditions.

Spalting wood is a lot like growing plants. With the right amounts of food, water, and heat, you should end up with good results, but success is by no means guaranteed

Elitists in spalting don't have a consensus on what wood are good for spalting. Some suggest hardwoods, like maple, so that the process won't soften the piece too much. Other suggest it does not matter. One thing is for sure that all wood can rot. This whole process is based on time and experimentation. You will never end up with the same looking piece twice (hence the allure to spalting).

Spalting, as mentioned, comes from fungi. Fungi likes to grow in warm and moist conditions. You will need a container that can close but does not have a complete seal. Oxygen needs to get in to allow the fungi to grow. Try and fill your container with some soil and humus (dead plant matter) to encourage fungi growth.

A redditor suggested adding cold coffee into the mix to raise the PH level to encourage fungus growth as well.

Green wood or fresh timber most likely already have some fungus present so adding more might not be required. Add more anyway can help expedite the process and ensure overall success.

It is possible to use wood that is already covered with fungi to put into your container. Sections of fell tree for example. Coming across already spalting wood should be just as easy. In the event you cannot get any (fungi) you can, like keshlam says, purchase spores. Although I don't have any specific suggestions as to where to acquire them.

There are some other suggestions such as simply picking mushrooms. I would suggest if you are going to do that you should refer a guide that has information about mushrooms in your local.

Either way, once you have a source, place it around the container as much as possible.

Some people will allow the fungus to start before putting wood in by waiting serveral weeks. This is an experiment so depending on your environment (temperature and humidity) there is no wrong approach so try and see what works best for you. You can add the wood and fungi at the same time.

So that you do not disturb the growth over time it is a great idea to have some smaller test pieces in the mix. That way you can check the overall progress without moving your large/main wood.

At a minimum get some of the fungus around the end grain of your pieces. Fungi will favor there over the center of your wood.

Assuming that you have the right conditions for growth it is recommended that you check your container after the first 5-6 weeks. If there is measurable progress then keep checking every 2 weeks after that until the desired effect is found on the wood.

Be careful not to leave the wood in too long as the process can penetrate the wood to the point where it is too soft to work. This is why you are checking it periodically.

When it looks like you have a piece that has the right amount of flair from spalting remove it from the container and clean its surface from soil and other debris. Let the wood air dry before you use it. Once dry you can safely work the wood by sanding, planing or turning etc. Once the wood is finished there should be no way for the fungi to continue growing and they would remain in a dormant state.

The are a number of potential safety concerns when it comes to spalting wood since you are encouraging the grow of fungus which in turn creates spores. Several sites suggest that your bathroom is a good place because of the humidity. While that might not be the best idea, as long as you have good ventilation it should not be harmful. The first link, in references below, contains some good general knowledge concerning your experiment and your safety.

For spalting, just like all woodworking, WEAR A MASK! If are lucky enough to live in a warm and wet climate: Spalt outside. Also, avoid doing your own spalting if you have respiratory disorders.

Spalting can be achieved by storing hydrated lumber or green wood conditions that allow mushroom spores or mushroom mycelium to contact wood that has a sufficient moisture level to allow growth. However, in the last two decades, many scientific papers on this topic have been published, indicating an increasing understanding of the conditions necessary to create spalted wood.

Once a poorly understand natural process, today there are companies producing fungi-based spalting kits for the home wood worker to induce spalting as a controlled process. Applying pure fungal isolates instead of storing wood in the presence of spores and picked mushrooms opens new possibilities for controlled spalting applications.

To begin proper induced spalting, you must start with green wood or wood that has been rehydrated to 30% or higher moisture content. Moisture is critical for allowing the fungi to run their course.

There are two major types of desirable spalting effects that may occur in wood.

Color Spalting occurs due to a range of fungi that have a tendency to create pigment in wood, creating and pushing pigment into the wood, starting at the leading edge of the fungi mycelium. This type of spalting occurs without the need for antagonism from other fungi species. Known color spalting fungi currently include several scytalidium and chlorociboria species.

Per Wikipedia: "The beetles introduce blue stain fungus into the sapwood that prevents the tree from repelling and killing the attacking beetles with tree pitch flow. The fungus also blocks water and nutrient transport within the tree." (Source https://en.wikipedia.org/wiki/Mountain_pine_beetle)

Zone Line Spalting occurs due to what is essentially a war inside the wood. The spalting effects that create zone lines are typically battle scars from a white rot fungus defending its food source from competing fungi. Zone line fungi are found far more easily in a wild setting, because they produce identifiable mushroom bodies. While colors may also form as a response to antagonism with other fungi (notably in trichaptum biforme or monascus ruber) the coloration will typically follow the patterning of zone lines.

Brown rot fungi are generally not favored species choices for inducing spalted wood effects. Brown rot colonization typically results in a long-term result of cubical cracking patterns, appearing across the wood grain. However, a notable exception is seen in brown oak. Brown oak is caused via colonization from the brown rot fungus Fistulina hepatica, which produces the beefsteak mushroom.

There is a commonly-cited "traditional technique" for creating spalted wood that typically involves applying various "stimulants" for the fungi, including beer, urine, coffee, and other substances. However, several recent researchers including Dr. Sara Robinson from Oregon State University have largely debunked the methods behind this oral tradition.

Careful observation and repetition of the spalting process has revealed to spalting researchers that the more easily-accessible nutritional sources there are outside of the wood, the less likely it is for the fungi to make the leap from colonizing the external nutrients to begin colonizing the lower-nutrition wood instead. The fungi are quite content to drink your beer while basking lazily in the slime layer created on the surface of your wood by the addition of beer.

What is desired for spalting are fungi that are incentivized to leap off of your inoculant media and attack the wood itself. Mushroom spores and mycelium from spalting fungi without an alternative desirable food source will readily colonize wood under compatible conditions. Wood colonization can also be achieved by the use of a colonized solid agar media with a low nutritive content. No beer is used, although a malt extract is commonly used in the creation of these spalting starters.

Here are links to published research on induced spalting techniques:

Matt has an excellent answer. However, a much simpler way that I do it is to just leave my hunk of wood out in the yard (or woods) in the rain maybe cover it with some wet leaves nature will take it's course. With White oak the sap wood will get some cool spalting colors in about a month or so. This is from fresh wood, not kiln dried, but I don't think the process would take much longer.

EDT: I think Maple will take a little longer than the 1 month of oak, but the closer the wood is to the size you are going to need, the faster it will happen, More surface area, and less need to penetrate.

1
How to make your own spalted maple
12
What is wood stabilization?