What general considerations do I need to take into account for wood movement?

I know that wood movement is an issue, but it's a bit vague for me where I should be concerned with it.

That page you link to is correct, wood movement is almost completely across the grain. Longitudinal or long-grain movement is so slight it can nearly always be ignored.

Just to note, we must remember movement is both expansion and contraction, which typically happens seasonally:

Obviously there are specific instances where movement cannot be accurately predicted. Where the grain shifts direction, as much as 90° within the same board (e.g. wood taken from various crotches within the tree) and particularly where there is wildly changing grain (e.g. in a burr or burl).

This is the standard cross-grain situation you want to try to avoid where possible. So the answer is basically yes but it's complex because you can't avoid it in many cases.

Where you have no choice but to make a cross-grain join, you must build in some means to allow for movement, for example by fixing loosely as with various tabletop fasteners, fixing at one end of the joint only or allowing something to float within a groove or rebate (US: rabbet), as in the floating panel in frame-and-panel construction.

Unless you take these sort of steps to avoid an issue you can take it that something will happen, not that it might.

That depends for a start on how you define hardware. The standard 'buttons' used to attach tabletops and allow movement are wood, and are made by the woodworker, but are technically hardware.

Rather than think about the orientations it is safe to use screws visualise the expansion and contraction of the wood and how you allow this to happen after fixing. So essentially screws could be safe in any joint they can be used in, as long as they're utilised appropriately.

A good example is the top to any table, which typically will be cross-grain to some portion of the underframe or apron assembly. One standard way is to fix firmly in the centre and allow the front and back edges to move. Where you want an edge to remain fixed relative to the piece (e.g. a table intended to go flush against the wall) you fix firmly there and allow movement to occur out from that edge: 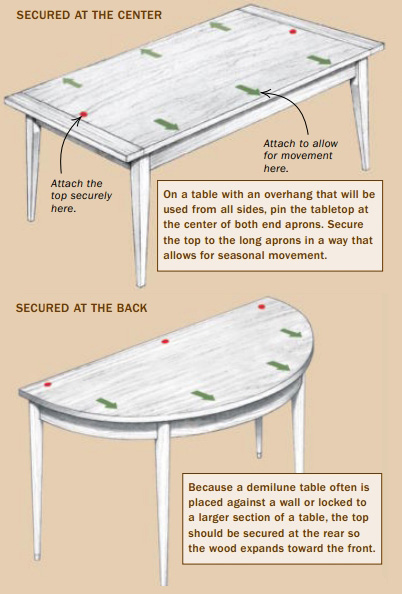 Screws are used here both for the points where firm fixing is desired as well as where movement is being allowed for, by screwing directly into the tabletop through the apron and through some form of movable fixing/fastener respectively.

Lets use a worse case scenario. A table top 30" wide made from flat-sawn wood connected to a cross brace (so the grains of the two pieces run perpendicular). If you look at how table tops are connected, they are usually just attached in the middle, allowing the top to expand to each side. In this case, the table could expand or contract up to 3/8 inch in total width.

In a best case, you have a 4 sided box. Even though the sides will expand and contract, they should all change the same amount at the same rate, so the joinery can be tight.

Wood moves more in areas that are cold and dry in the winter then hot and humid in the summer, than in areas that are relatively consistent year around. Items stored in a climate controlled house won't see nearly as much movement as others.

You can minimize the effects of wood movement by choosing quartersawn and rift-sawn boards.

Graphus gave a great answer covering many of the design considerations and pretty much covered the strategies for dealing with movement.

Shrinkage and expansion also vary by material (wood, MDF, OSB, plywood...), species, climate, and application, as well as other factors. If the humidity level is relatively consistent, you won't need to allow for as much movement as if you're building a piece of outdoor furniture which will be subjected to the elements, for example.

If you aren't sure how much movement to account for in your project, you can use the Shrinkulator to get an estimate based on the wood species you're using.

Not the answer you're looking for? Browse other questions tagged wood-movement or ask your own question.

1
Why did desk boards split apart?
19
which direction does wood expand?
8
Do pocket hole screws allow for proper expansion and contraction in planked table tops?
6
Filling gaps/seams in a new cherry tabletop
6
When working with maple, do I need to seal the wood before assembling the furniture?
6
How can I fix warping on board made of glued 2x4s
9
Stabilizer for softwood tabletop that bows
7
Cherry wood for dining table - Strong enough or should I consider Walnut?
6
Why keep gaps in siding of outdoor furniture project?
7
Is this cedar planter box design asking for problems w/ wood movement?
See more linked questions

8
Planning for wood movement in drawers
7
Is this cedar planter box design asking for problems w/ wood movement?
2
Replacing top on particleboard desk with solid wood - allow for movement? Bad idea?
5
Do I need to worry about expansion and shrinkage for my table top with wood joined at 45 degree angles?
4
How to account for wood movement in a curved chest lid
1
Would different finishing schedules inside and out spell doom for a bathroom cabinet?