My friend and I are endeavoring to create our own gaming table. With little to no experience working with wood other than youtube videos and the occasional side project, we come to you in need of help! Here you can see my schematic. 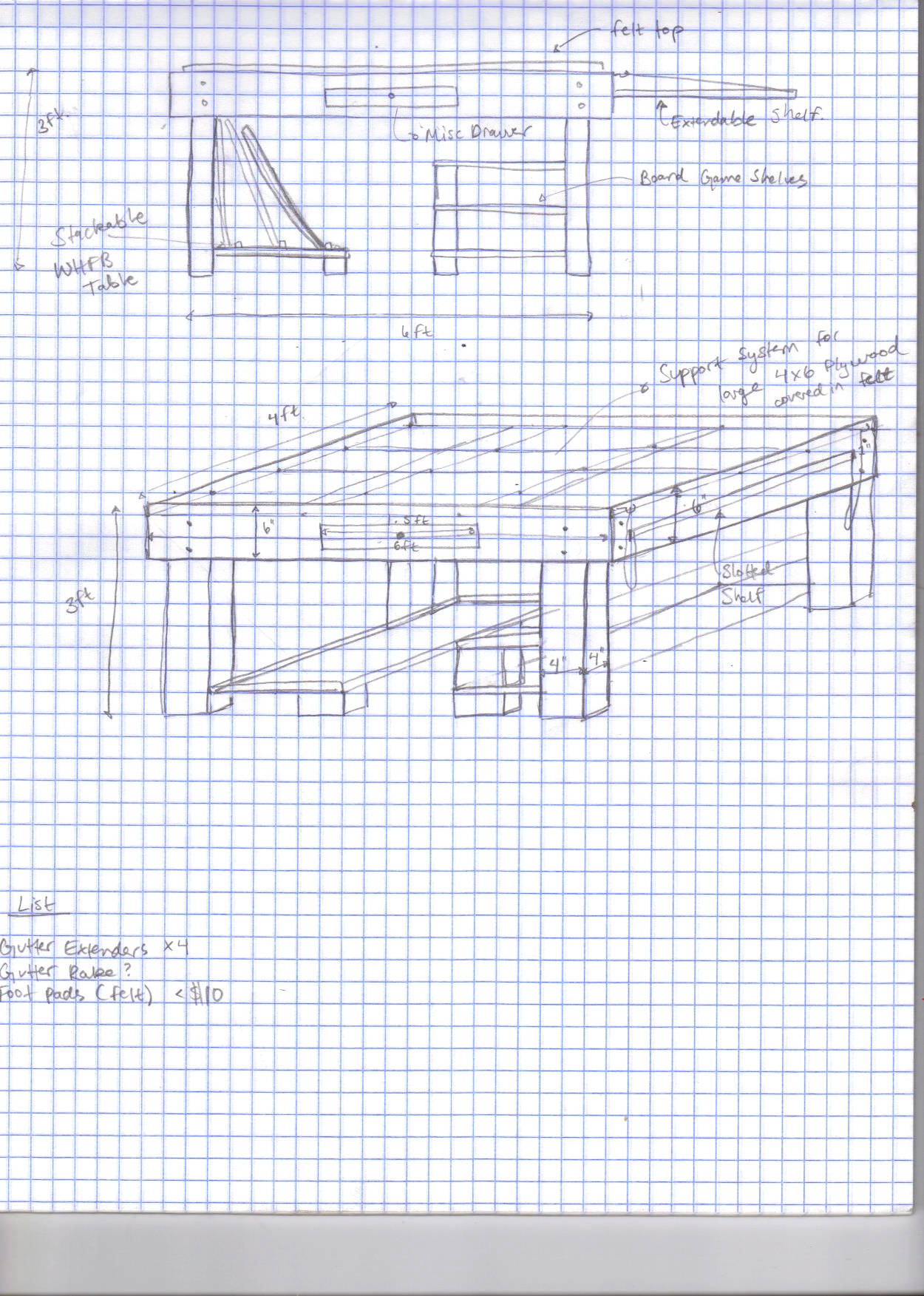 The features it includes are:

I have the following questions regarding the project:

Let me answer your questions in reverse order:

Are we in over our heads?!

No, you're not in over your heads. You can do this.

Do you see anything wrong with my initial draft?

At a glance only a few things concern me.

For the shelving units below the table surface, how do I connect the shelves to the legs? Screws that are longer than 4" and some wood glue? Routing out a slot to shove that thing into?

You can certainly route a dado to help register each shelf and create more glue surface. Wood glue will certainly strengthen the joints but you may want to either run the shelves' other legs all the way up to the table frame/apron, or make the shelf removable in case you need to move it at some point in the future. If you want the shelves to be removable, you probably don't want to glue them to the legs.

You can use long screws that go through the legs and into the end of the shelves but personally I would use a different type of fastening method, especially if the shelves are made from plywood or MDF. (Also keep in mind you'll need fairly deep countersink or you'll need longer than 4" screws if your legs are actually 4"x4" as shown in your diagram.)

Here are some of the alternatives I think you should consider for attaching the shelves to the legs:

Let me preface this by saying that you should check out Sketchup, it's free :)

The overall table isn't bad, per se. I'm concerned about your shelf construction. If they're not detachable, they're going to be a weak point when you move the table.

I would make a few suggestions ... If it's possible, make the bottom one large shelf rather than splitting it into two pieces. If it is two pieces as it appears to be, then you might consider some options:

Add two more legs offset toward the center to act as support for the shelves. These could have ledges cut to rest shelves on, or hardware as rob recommended(I would use the hardware)

In this way you will be able to make each side of the table adjustable, and you can add in shelves as necessary.

You'll also need some support for your slotted shelves. The further in they go, the more support they'll have.

Below are two possibilities.
On the left, there are raised rails which push against the top of the frame and the shelf is extended further in.

On the right, the rails are offset, which allows them to be longer. both of these hinge on using the rail as a stop, to keep it from sliding out. If you want them to be able to slide out, attach the rails to the table rather than the shelves.

I would lean toward the left option since it would give more support to the rail. You will also want to reinforce the mouth of the slot, it's the fulcrum of "the lever", and will take the all of the downward pressure being applied.

Leave 1/16 inch above and on the sides of the shelf to allow for wood expanding.