What is the purpose of the side handle on a hand ("eggbeater") drill?

What is the purpose of the side knob (circled in orange) on a hand or "eggbeater" drill? I can't remember ever using this handle for anything.

I'm considering cutting off the side knob so that the drill will fit better in my tool chest. Would this lead to any problems or loss of functionality? 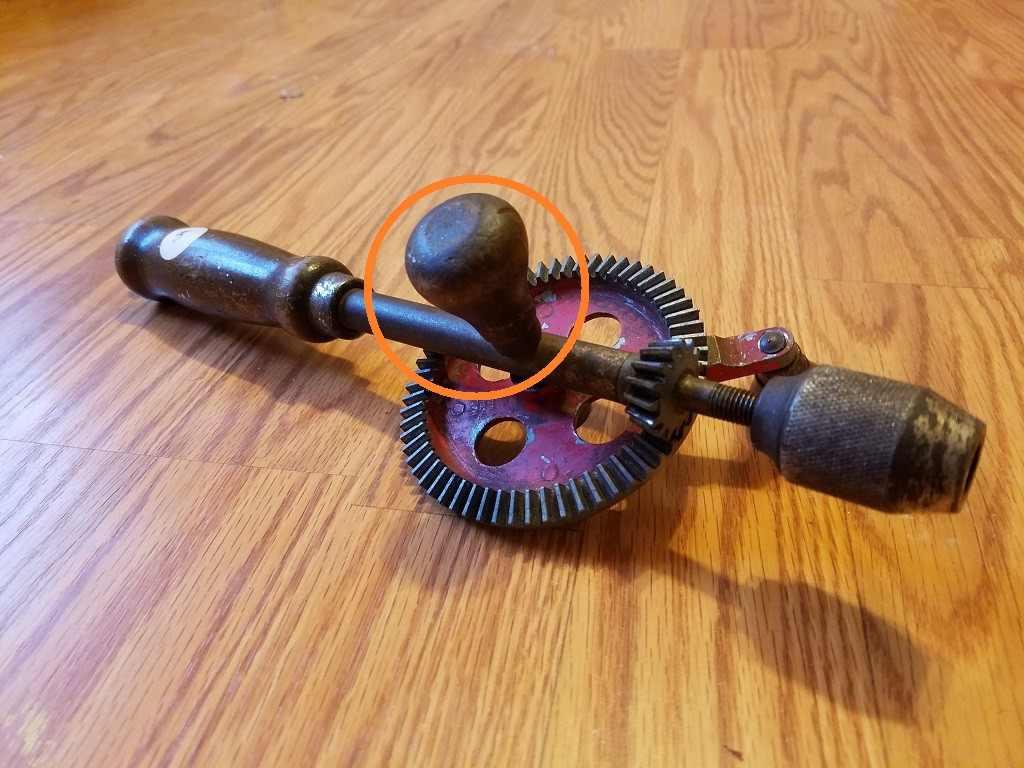 Whichever of the two, the bit, or the entire-(not itself confronting the material's resistance like the bit does)-apparatus will tend to take the action of the torque and the not-the-bit components face only the resistance to movement that air provides, in addition to any resistance provided by any hold one has on the apparatus. In short:

If the bit stops, the entire rest of it wants to begin moving, and more so as one tries harder to make the bit move.

Unless one makes it harder for the apparatus to move, the bit will not begin moving and one is not really achieving the assumed goal.

One's hold on the operating handle is part of that and any resistance pressing against the "shoe" (shown in fred_dot_u's picture), is helpful. However, the only direct action resisting the apparatus spinning so far is resistance through the operating handle and the torque and force one places there stands a very good chance of breaking the operating mechanism, or at least wearing it much faster.

Hence the handle shown. Gripping it only risks snapping it off, not ruining the expensive part of the mechanism. Force applied holding it in place actively resists the tendency of the apparatus to spin itself and not the drill bit. This allows one to force the bit to be the place of least resistance to movement without lessening the pressure "into" the bit's action (for instance, the force applied to the shoe). That means the bit can be kept from simply spinning without accomplishing much.

There would always be an ability to do that by lessening "inward" force, but the range of such available would much less and therefore the success much iffier, than by using the asked about handle. Using it allows a much greater operating range leading to the ability to have much more finesse in those situations.

Of courrse, most drilling done with it would not reach these points and one would only need use the handle now and then. Perhaps even ever depending on needs.

(By the way, perhaps see if it might simply be removable by design, or if a more careful removal might allow you to re-attach it when needed. Or if not "this-or-not-this-there-is-no-other", you might hack it off and use a power drill for the few times you would have made use of it. Also if value to another might be of interest someday, "in-tact" tickles more money out of people than "at-tacked"...)

In my younger days, I had only this type of drill with which to bore holes. It was often necessary to place the in-line grip on my chest or belt to apply pressure. A board or similar panel provided some dispersal of force against the human body. The side handle served to stabilize the drill and to prevent rotation in an undesirable manner.

Addendum: something popped into my alleged mind during the day. The drill I would have used might have had a shoe. This image shows this feature, making the determination that much easier. Image courtesy of Shutterstock: 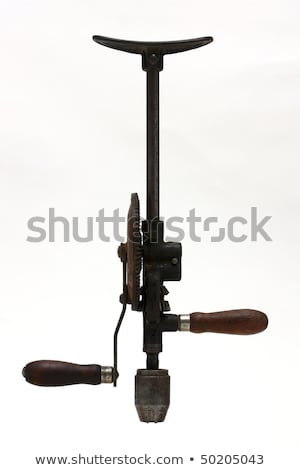 Not the answer you're looking for? Browse other questions tagged hand-tools drill tool-modification or ask your own question.

12
Is this a specific kind of hand drill?
3
What tool would this handle be for?
8
What are the main different types of "hand drills"?
5
Most general purpose hand plane for limited budget
1
Taking apart a pre-assembled desk
3
What features should I look for when buying my first drill?
0
Old drill press. How do I remove the handle/quill
0
Hand plane blade lower on one side
3
Best way to cut very soft 4mm (1/8") poplar plywood sheets with hand tools