I find it much easier to get repeatable sharpening results with a honing guide, but I have noticed that the plane blades I sharpen with my Eclipse style guide are ending up with a different geometry than I want, and it is preventing me closing the mouth on my smoothing plane very tightly.

When looking at the blade from above, the angle between the edge to the long sides is changing, so that the edge is developing a skew. My theory is that this happens because the blade tapers in width measurably along its length (EDIT: approximately 1/16" over its length), and also because the right jaw on the honing guide is flat and the left is curved. This inherently presents the blade to the stone at a skew to its long axis. 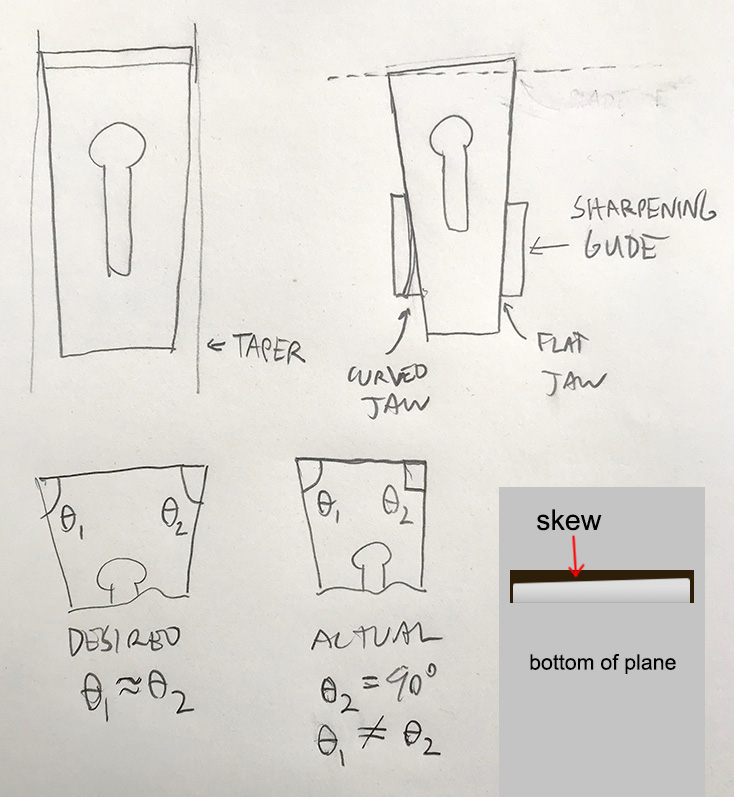 I suppose it is also possible that this is because I am right handed, so maybe I am bearing down harder on the right of the blade without noticing, but the geometry involved seems very suspicious.

The reason this is a problem is that even with the correct lateral adjustment, there's a point where the blade is slightly skewed in the mouth and the mouth can't be closed as much as is recommended on smoothing planes, because one side of the blade is just plain further forward than the other. It also makes it difficult to set the cap iron because then the cap iron needs to be at an angle to the blade's long axis and can interfere with the sides of the plane.

How do other people deal with this issue? Is there something weird with what I'm doing?

EDIT: This is an old Stanley plane blade that is doing this. I compared it to a new retail Stanley plane blade & the new one DOES NOT have a noticeable taper along its length. Did blades change from tapered to untapered at some point? Do I just have a weird blade? It came from eBay.

I also have a Kell honing guide -- but the jaws are both parallel so I'm not sure that would help much, and it seems like it would be a less secure clamp on a tapered blade.

Although the taper in the iron seems to be the primary cause of the problem here, in fact edges going out of square isn't at all uncommon after many cycles of honing. Most woodworkers, unless they've taken deliberate steps to avoid doing so, habitually bear down more strongly on one side than the other when honing and over time this tends to produce edges with a slight skew.

This can happen both with jig users or with freehanders, although the problem will tend to be great with the latter because the blade can tilt more easily.

You can get rid of the skew in a number of ways:

With the two hone-it-away options, so that the work doesn't take an age it should be done on a suitably rough or fast-cutting honing surface (do note, not necessarily the same thing) rather than just any honing stone. But although you can remove the skew in one go it doesn't have to be done all at once. You can improve this in stages through subsequent honing cycles until the edge is back to square.

Avoiding it in future
Taking more care as you hone using the venerable Eclipse-style jig can avoid this. Now that you've identified the tendency you can compensate for it and should be able to maintain a squarer edge from now on. Last-minute thought: maybe you can rotate the cap iron 180°, slide it back down towards the edge and tighten the screw to use its parallel sides to hold the iron square in the jig.

Honing freehand can certainly avoid this because the taper in the iron becomes irrelevant, this is the option I would personally recommend (for a number of reasons) although I understand fully if you aren't able to or just don't want to.

So I'd suggest that using a different honing guide is the ideal solution for an existing user of honing guides. Rest assured, this isn't trying to steer you to one of the high-dollar modern honing guides by L-N or Veritas (have you seen what they're charging for these now?!), or one of the sometimes-costly vintage models, instead it's the cheapest and arguably the best honing guide out there, What's a quick, easy home-made honing guide?

Not only does it cost mere pennies but most could knock one up in 10-15 minutes without having to go to the hardware store to buy any parts (the simplest iteration only requires two wood screws). And it uses up a small scrap or two of wood that may be too small to be of any use otherwise.

Everyone reading this who is into sharpening with a jig, or wants to try it out, should go and make themselves one now. I'll wait.

Did blades change from tapered to untapered at some point?

Yes, but not in the way you're asking. Most references you'll read to tapered irons are tapered in thickness (thick at the edge), not in width, although you do occasionally see vintage irons which taper in both ways.

You might have a rare iron that was clipped unevenly from the stock sheet, and QC just didn't catch it.

I can't imagine how it could have happened accidentally through use, but it's possible it was tapered by a previous owner. Perhaps a bad dent on one side was ground out? The upper portion of irons remain unhardened and the steel can be really quite soft, so bad distortions, including mushrooming from hammer adjustment, are sometimes seen on older irons from Bailey-pattern planes.

Although not part of your main query I want to touch on this because you mentioned it. A closed-up mouth is not a must in a smoothing plane, although in both historical and modern sources you'll often read that a tight mouth is good (and not just for smoothers). But the evidence of old woodies tells us a great deal about just how big a plane's mouth can be while the plane remains usable,.

The cap iron is much more effective at controlling tearout than mouth size and can do the job solo. While you can use both in concert it's far simpler and more straightforward to use just one, and the one to favour is the cap iron. This allows the frog to be a set-it-and-forget it part of the plane, and a poll of woodworkers will find that the majority rarely or never move their frogs.

There's more here on setting the cap iron in a few previous Answers e.g. hand plane controls (bevel down) and Mouth of a Plane You might also find this of interest, Different ways to set up a Number 4 bench plane.

Not the answer you're looking for? Browse other questions tagged sharpening plane blade or ask your own question.

22
How do I sharpen a chisel/plane blade?
10
How can I adjust my hand plane to take an even cut across its width?
8
How to sharpen a planer knife the right way?
5
Is the "paper test" actually relevant to sharpening chisels and planes?
7
Stanley Bailey frog adjustment problem
3
Problems adjusting block plane
4
What's a quick, easy home-made honing guide?
3
Stanley 9 1/4 block plane depth adjuster interferes with lateral adjuster
8
Can a bad mouth plane be saved?
5
Hand plane gouging wood even with fine adjustments