How to clean sharpening stone in wood case?

I've got an oil stone from my grandpa that is glued into a wood case, I use it to sharpen chisels and plane irons. The stone has absorbed tons of oil and I'd like to clean it to find out the original color and remove some of the petroleum odor since I prefer non-toxic honing fluids like mineral oil or glass cleaner. If it wasn't in a wood case this would be easy. I tried cleaning the top of the stone several times with Dawn dish liquid, but after a few hours more oil oozes to the surface (visible in photo). 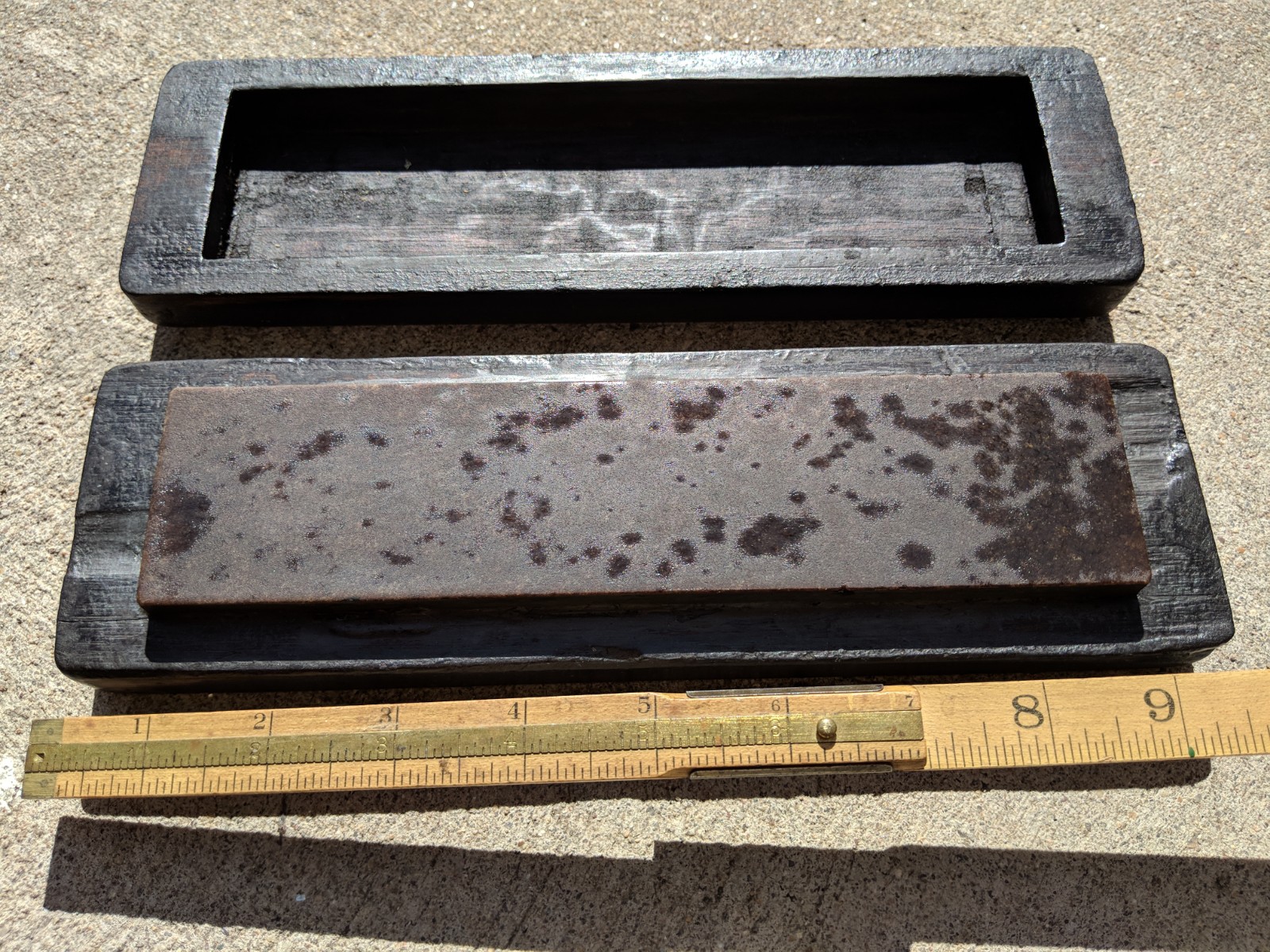 More info: the stone was severely dished when I got it, about 3/32" lower in the middle than the sides. I flattened on a wet cinder block, highly recommend that method, took about 10 minutes. Very fast, accurate, and cheap. Only did that until it was flat, didn't remove any material from the middle of the stone. It's fairly smooth, feels like magazine paper. I'd say it is a fine or superfine grit, slow to remove material but good for honing. I thought it was a black Arkansas stone, but as I clean it the color appears a bit more gray-ish.

I tried cleaning the top of the stone several times with Dawn dish liquid, after a few hours more oil oozes to the surface (visible in photo).

Keep going. Cleaning old stones is invariably a multi-step process, so you've already started on the road towards it being clean and just need to continue. There's more on cleaning from me in answer to this older Question, How can I identify sharpening stones?

As mentioned in the link above, one of the established ways of cleaning a stone is to soak in petrol (gasoline), kerosene or another solvent1. You can do this with the stone in the wood since organic solvents generally won't harm wood in any way, except sometimes removing a little colour2, but there's a good chance you'll lose the original finish with this method. Although initially very smelly fear not, the solvent smell will dissipate as it dries out and eventually the stone will have no odour to speak of.

It can take a heck of a lot of work to get all oil from a stone that has absorbed lots of it over decades of use, or was oil-filled in the factory in the case of synthetic stones. Expect the process to require numerous steps and to take a long time and just set to it. As there's no predicting how much oil needs to be removed and how much each step of cleaning will remove, it's one of those tasks that takes as long as it takes.

A friend cleaned out a Norton stone a year or so ago to see how it worked without the factory fill (many users report they cut much faster without and that's what he wanted). I believe it took a half-dozen soaks in boiling caustic water before it stopped releasing the original "oil filling"! Incidentally the factory fill is actually a grease, not a liquid oil, so there's a hint there — if one wants to fill a stone so that it doesn't continually absorb oil like a sponge don't soak it in oil but instead use something more like Vaseline3.

It's likely you'd break the base if you tried to pry the stone out, and depending on the type of stone you risk breaking or chipping that too. Stones tend not to be glued in place BTW, historically they were set into plaster, although a user might use any glue or adhesive product he had to hand — casein, pitch, hide glue, epoxy, Bondo, you name it o_O

The safest way to get a stone free is to deliberately set out to lose the wooden case. It's of course up to each owner to decide for themselves which is more valuable, the stone or the case it's in.

You could try boiling water. This has been used to successfully release stones from wooden bases (works especially well if hide glue had been used) and the wood might dry later without harm, but old wood will often split after even brief soaking in hot water when it subsequently dries out. So although this seems like the gentlest option it still comes with a risk.

More info: the stone was severely dished when I got it, about 3/32" lower in middle than the sides.

I wondered at how flat it was for a stone of some vintage, you did a good job flattening it. Although a dished or 'swayed' stone can still be used (that's how they get so dished in the first place) stones are far more useful when as close to flat as possible.

I flattened on a wet cinder block, highly recommend that method, took about 10 minutes. Very fast, accurate, and cheap.

I've used that method too and was pleasantly surprised at how well it worked on some stones! Although hard naturals are a chore to abrade and one of the other established methods (using some form of commercial abrasive) may need to be adopted. A little use of abrasive is generally desirable to dress a stone's surface after flattening on something coarse4.

1 The solvent is contaminated with oil after this, so either needs to be reserved for cleaning other oily or greasy things (note: can be useful in the restoration of old tools) or A, disposed of in a suitable manner for your area, or B, left to evaporate until only the oil/grease remains and then that residue can be thrown out in the household refuse as it's no longer classed as toxic waste.

2 Oil-contaminated wood can actually be soaked in solvent for hours or days if necessary to try to get it clean, a technique sometimes used in the restoration of gun stocks.

3 The packaging of some older synthetic stones included instructions to soak in a pan of hot petroleum jelly. This was to temper cutting speed but it has the effect of keeping oil on the surface. I've found that just smearing a stone with Vaseline can do a lot to reduce its absorbency, although the soaking wouldn't be hard to arrange.

4 Stones can be made to cut a little faster or a lot slower depending on the surface texture, a process sometimes referred to as grading. On a single-grit stone (both natural and synthetic) this can be used to advantage to provide two faces with different properties.

...after a few hours more oil oozes to the surface...

Oil oozes from the surface because it has soaked into the porous stone. It may continue to do so for some time considering that it is an old well used sharpening stone. To have any success in getting the oil out may require immersing the stone in a solvent for some period of time. Dawn in water may not be able to soak into the stone well to dissolve oil that has penetrated deeper. Of course submerging the stone (and wood base) for an extended period may also damage the wood.

The glue could easily be one that is not easily dissolved as well. In addition glue under the center of the stone may not even be accessible to any solvent. My guess is that since you want to preserve your grandfathers stone you should not mess with it much more than you have. You could easily damage it beyond repair. Since you do not want the original oils on your tools, one possible alternative might be to make a new box and stone inspired by the original and pass both stones on to the next generation in the future.

It's a No. 1 Washita. The original color will be coral/light yellow and butterscotch mottling.

You could just use as is. Use a citrus solvent as a honing fluid. It will cut the oil that is in it and hopefully more and more will come out in use. Simple Green or Bio-Green Clean also work well, they emulsify the oil and give a nice honing juice. That stone will be a great cutter and can leave a nice matte finish.

I tried cleaning the top of the stone several times with Dawn dish liquid, but after a few hours more oil oozes to the surface

One slow but simple option is to pack it in sawdust for a while. The sawdust should absorb any surface oil and draw out more. Check it periodically and change the sawdust as needed. Parking it in a warm place might help speed up the process.

These washitas don't absorb oil deeply like synthetic stones. Just using the stone with a light oil should be fine unless the surface is oxidized (gummy). Any number of things to clean the surface would be fine (cleaners, solvents, soaks), but I'd go easy on the stone unless there's a performance reason to.

If you're dreaming of a bright white stone, that's fine, but it won't stay that way for long once you're using it again. Washita stones wear a little faster than hard arkansas stones, so a combination of flattening and cleaning at the same time (with a diamond hone or silicon carbide grit on a flat surface) is a reasonable thing to do.