I have these 9”-wide, 3/4”-thick pine panels from the bigbox store that i would like to make into a carcass with dovetails.

Such panels commonly exhibit some cupping, but have some spring into them, and can typically be flattened with clamp pressure.

Would they stay flat once joined with dovetails? or does stock need to be absolutely flat from the start? 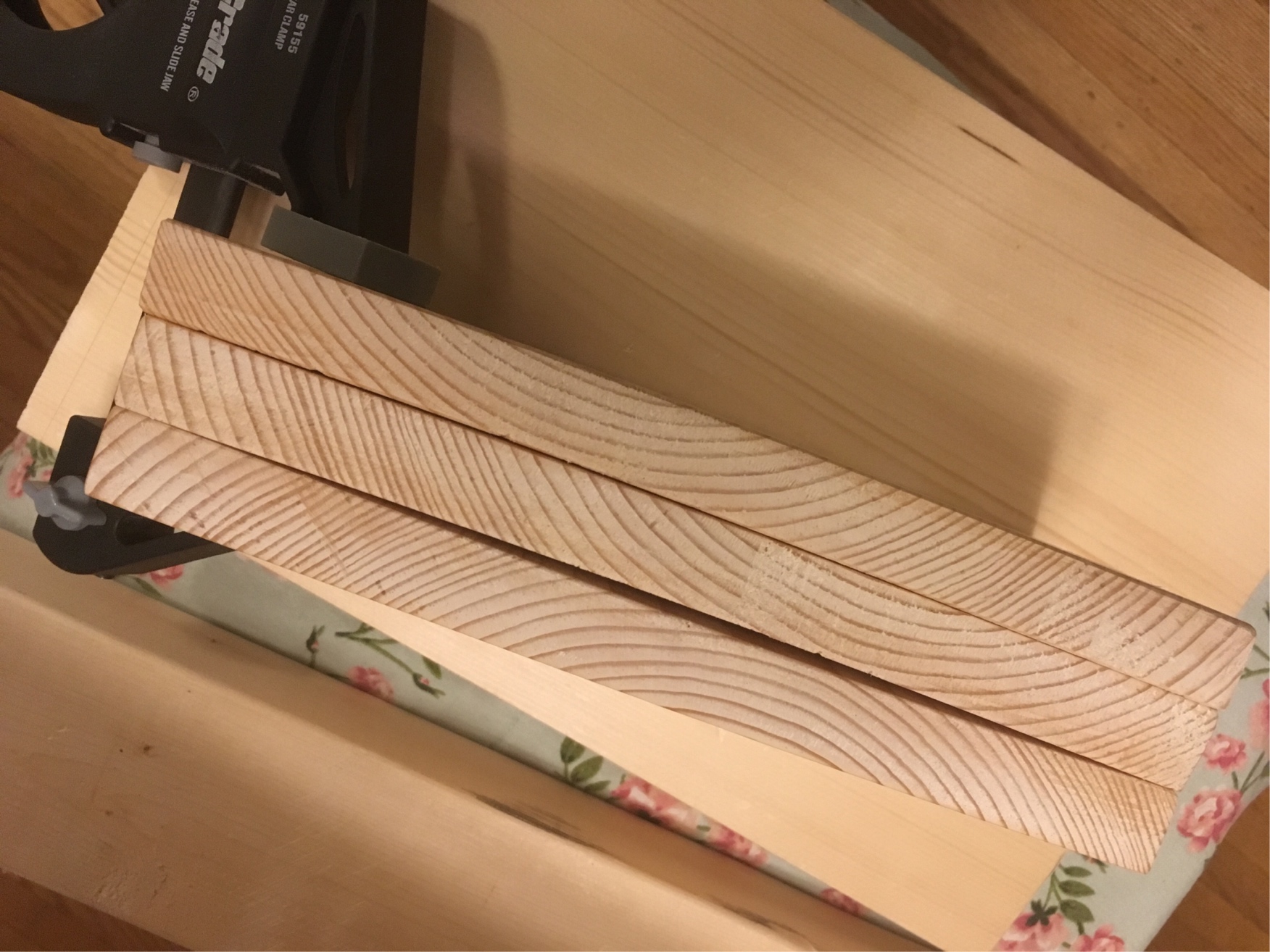 Photo shows three panels with varying amounts of cupping. A second clamp, if placed in the center, makes them flat again.

I gave it a go with the panels, based on feedback here. And it's totally fine, plus or minus some adjustments. This was my first attempt at dovetails. Here's a few things I'd not realized until I had to actually do it.

0) A bit more planning on my part would have revealed that the pin board (which was a glue-up panel) also had some cupping in it. So I had to clamp the two boards flat simultaneously while scribing my pin board on the tail board, which did complicate the clamping and marking situation. The tail board was clamped flat with a vise (a workmate), and I was holding the pin board vertically, with a 2x4 clamped on the piece to keep the pin board straight.

1) Depending on the level of cupping in the grain of the tail board, you end up with somewhat weak tail corners. I unfortunately didn't pay attention to that when I did the layout. I designed pins first, but didn't double check where the pins landed before committing to their final shape. I also should have pared more carefully around these fragile corners. 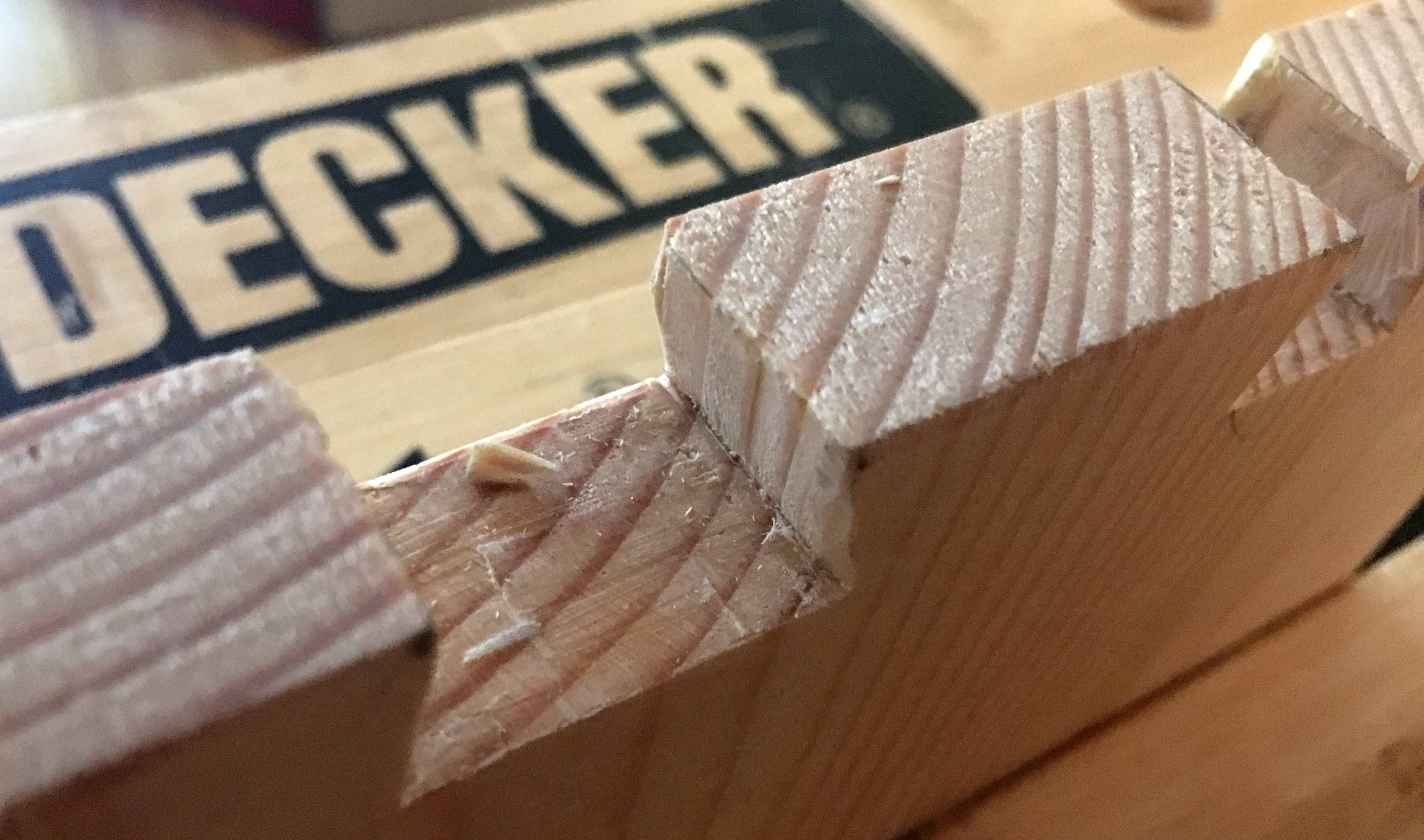 Photo shows two broken tail corners, right on the growth line. I tried glue, but it broke once more in a different spot, then I just accepted my mistake.

2) I put the heartside facing outwards of the box, as was recommended. But I still ended up with a minute gap. I've shone light through the gap here. There is some spring still in it and it won't rest at the bottom without pressure -- maybe my joint can be cleaned up a bit more. I feel it will probably vanish, with clamps and glue-up.

Photo shows a minute gap at the bottom of the pin board.

And the overall look:

My rule is to use it if it can be flattened with no more than moderate hand pressure. Dovetails in particular are forgiving, because the joinery forces pieces into contact along the entire joint line. The wood will continue to move over time anyway. Also, just by looking at the ring orientation, these pieces are going to bend that way.

You'll want to be careful with layout - best to clamp the boards flat, so that when you mark across the thickness (ie, on the end grain for tails, presuming tails-first) you are marking square across. If you're using a machine jig, make sure they are clamped in with enough pressure to stay flat during machining.

Finally, perhaps most importantly, orient the boards in the joint so that the ends will tend to cup into the joint. Oriented the other way, the ends will eventually show gaps. As i mentioned above, the joinery itself will keep the middle part tight. This means that heart side should face out of your box/drawer/assembly.

Not the answer you're looking for? Browse other questions tagged joinery dovetail or ask your own question.

9
How should I orient a spline along a long edge join?
5
Tips for planing huge panels of joined wood
9
What's the best joint when exposing to weather (specifically for a beehive box)
8
Connecting the MDF corners, so there's no gap
5
Edge joint failure - what is the cause?
9
How does Frank Klausz achieve a >90 turn with a turning saw without cleanup when cutting dovetails?
3
Need help with design of entryway bench joinery
3
How to make a stronger butt joint where two panels meet
2
Dovetails with undermount drawer slides