I need to build a few workbenches for my office at work. They won't be used for true "shop" work but will need to be fairly strong, as there will be equipment and tools on them. I am planning on painting the top, so I don't care about the raw look of it.

To save time on the construction, I am planning on a tubular 3/4" galvanized frame like this: 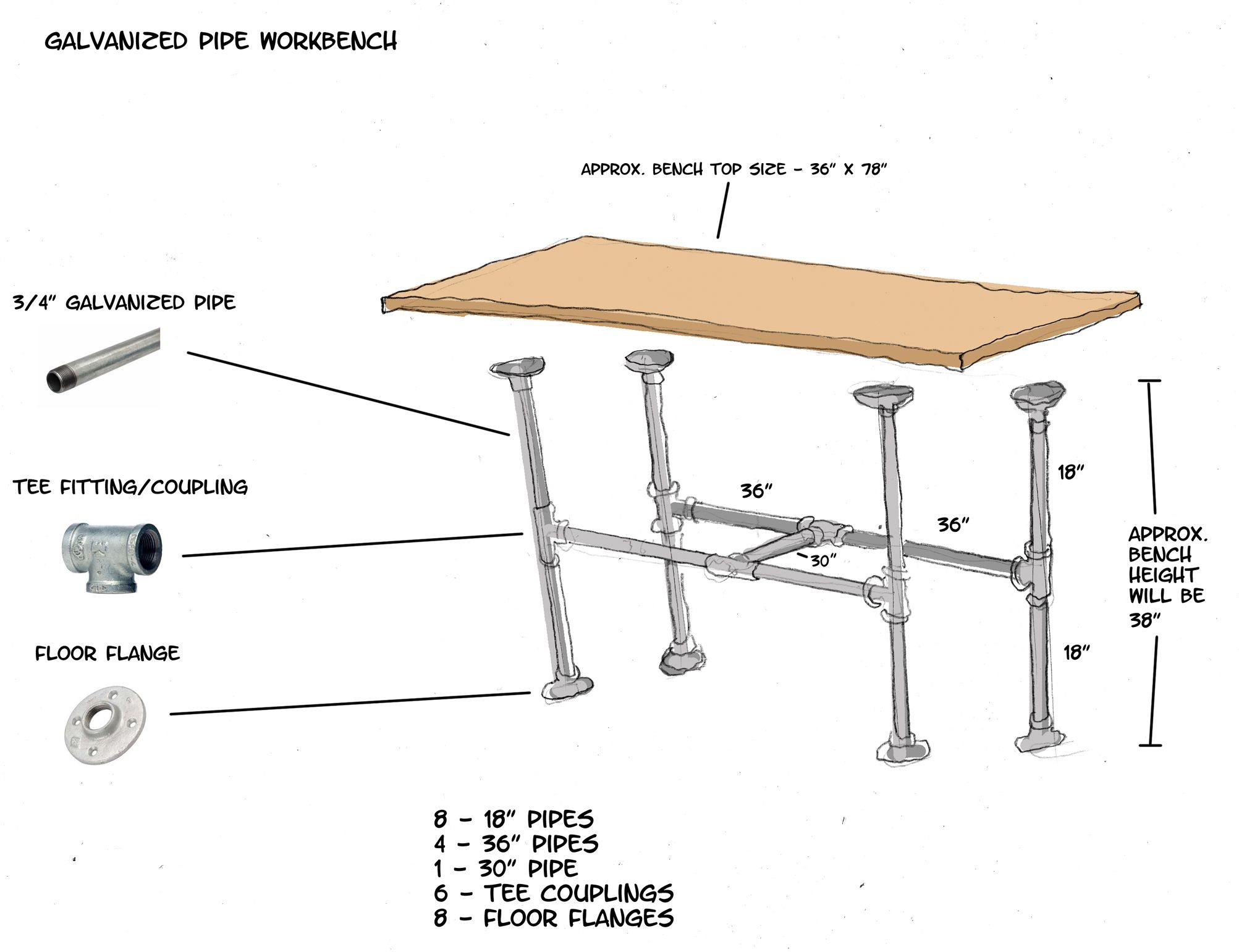 For the tabletop itself, I am thinking of an IKEA solid oak 1 1/8" countertop

My worry is that since the tabletop will be around 8' long, and it won't be supported along the length like a standard wood frame, it will be prone to warping/bending/weakness along the unsupported areas.

The options I see are:

1) Add third set of tube supports in the center of the table, so it will now have 6 contact points. I think I should do this regardless of other measures I take.

2) Add an unsupported oak apron around the edge of the top.

3) Support the tabletop with some sort of metal structure.

4) (The option I am leaning toward) Fiberglass the top and bottom with some glass, like how a boat composite is made. This has the advantage of making a nice durable finish on the top that is easy to paint. Also strengthens the tabletop overall, and will solve any poor gluing issues by IKEA.

Let me know what your thoughts are!

It's right to be cautious, but this is oak and over an inch in thickness which is really quite thick as far as tabletops go. The Ikea countertop material is also made from glued staves1, which isn't really that similar to a single wide board or 2-3 planks glued along their edges and is likely to be significantly stiffer than either.

But as it's best to err on the side of caution when I plugged some numbers into the Sagulator I ignored this likely advantage and basically did a worst-case scenario, assuming a very large central load and it gives the sag as Acceptable. Total sag was given as 0.13", which may be too small to see with the naked eye.

Even changing the width to the full 78" and the depth from 30" to only 25" sag is Acceptable, with a total of 0.19". Beyond this, using the original numbers but changing the material to numerous species of pine the sag is still acceptable because of the thickness of the material. So I think you're good as-is!

Other factors
There are some potential worries about racking forces with this design, but I think you're fine if these benches won't be used as true workbenches where you'll be pushing into them with tools sideways or inwards.

Wood movement is never something to ignore with a top made from solid wood and not a manmade board material like ply or MDF. For an 8% change in moisture content of the wood the calculated movement in flat-sawn oak 30" wide comes out to nearly 0.9", which is I think a little more than the flex in the structure would accommodate2. So some allowance for movement should be built in. This is easily done, e.g. by wallowing out the holes in the floor flanges which will be used to mount the wood top (ignore the ones that go on the floor). You could alternatively use screws that are a loose fits in the existing holes but in general it's better to use shorter, stouter screws than longer skinnier ones.

One last note, as you're working with hardwood you'd be advised to drill pilot holes for your screws. Be careful doing this so as not to drill through the top of the workbench! This is surprisingly easy to do and most woodworkers have made the mistake at least once LOL The small holes that result are patched easily enough (especially here since you plan to paint the tops) but obviously you want to avoid the extra work if you can. The old standby, the tape trick, is the easiest way to help prevent drilling too deeply.

1 A construction method these days often, but misleadingly, referred to as butcher block.

2 Your movement could well end up being less than this but it's best to account for maximum movement rather than undershoot and have things be put under stress (which can lead to stripped or broken screws and a wobbly table at the end of the day).

Not the answer you're looking for? Browse other questions tagged tabletop workbench or ask your own question.

9
Stabilizer for softwood tabletop that bows
3
Is this a sufficient attachment method for a tabletop?
6
Thick tabletop movement
3
Is wood-glue enough or should I use extra support?
2
Reusable Desk design: how to join pieces?
4
Caster/slide for tabletop tray
5
Glue-up for butcher block-style countertop
1
How to correct water based stain dried streaky
1
Mounting method for tabletop
2
Designing legs for large larch tabletop