Which way of joining is stronger?

I have to build a box to extend the length of a projector bracket:

The box has a depth of 140mm. That is the length by which I need to extend the length of the projector arm because the wall on which the bracket is mounted is recessed by 140mm behind the image surface.

Does one of the following two ways of joining offer a stronger structure? 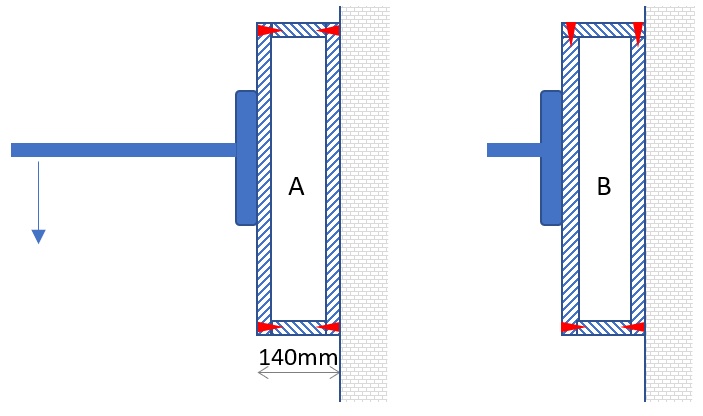 I don't have tools to make complex joints. I can only screw ½" plywood at right angles.

IF you consider the connection of the bracket to mounting box as a hinge (or rotation axis) the projector will exert a downward force that will try to rotate the bracket counter clockwise in your diagram. This force will attempt to pull the top of your box out top left connection. IN option 'A' this rotational force is resisted by the hold that the wood has on the threads of the screw. In option 'B' the rotational force is resisted more by the sheer strength of the screws. In this situation I would trust the strength of the steel screws more than the resistance of the wood to prevent the screws from pulling out making 'B' the better choice.

Since the weights are fairly light and the bracket is not setting out from the box very far, it is probable that both options would be satisfactory especially considering that there are multiple screws across the top of the box and together they should be adequate to prevent the screws from pulling out of the top of the box. I would also not hesitate to skip screws all together by creating a rabbet at the corners and gluing the wood pices together.

Not the answer you're looking for? Browse other questions tagged joinery design strength or ask your own question.

4
90 degree butt Versus Pocket screws for cabinet with legs

9
How could I have designed this cabinet to avoid assembly and alignment problems?
1
For a kid's balance beam, which way should the grain face?
1
Joining Thin Angled Wood
2
Reusable Desk design: how to join pieces?
3
Shelves inside cupboard, how to attach to legs?
4
Joining on an angle
2
Which weight bearing knockdown joints
3
Back nail or face nail. Which is stronger?
2
Which shelf holds the most weight
3
What is the name of this way of Joining?