When should I use a spiral router bit? 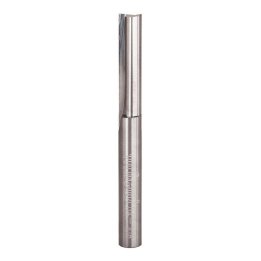 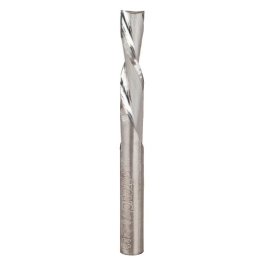 The main advantage of using straight bits seems to be that they are cheaper, and easier to re-sharpen. They are perfectly fine for a number of uses though, especially where finish isn't particularly important.

Downcut and upcut bits generally give a better cut and are easier to use when working with a handheld/manual-feed router. This is because instead of the cutting edge hitting the timber all at once (as with a straight-fluted cutter), there is only a single small point of contact between the cutter and the workpiece when edge-routing, and a more constant contact when slot-routing. Consequently you get less "chatter" of the router during use. If you're using a CNC router then you can also typically use a faster feed speed when cutting with a spiral bit just because of the superior chip clearance and the lessened chatter. The chip clearance with an upcut bit also means that they're good for plunging into the centre of a workpiece if this is important to you.

Upcut bits give good chip clearance as they bring the chips up and out of a slotted cut, but they may cause the top cut surface to chip away more than a straight bit or a downcut bit. If you're cutting a composite, laminated or veneered board in a situation where the top surface finish is important (e.g. a kitchen worktop) but the bottom isn't, then a downcut bit can be better, as the downward spiral pushes down on the veneer/coating rather than pulling it upwards and causing the surface to chip away.

When using a downcut bit for partial-depth slotting (i.e. not going through the full depth of a board, and routing in the middle of a board rather than edging) you will have to go slowly as the chip clearance for these cutters is not as good as upcut/straight fluted bits - and in fact if you're not careful a downcut bit can compact chips into a slot, causing chip-recutting and potentially excessive heat buildup and even fires.

If you're edging a board which is laminated on both sides, and you don't want either side to chip, you can actually get what's called a "compression cut" or up-down spiral blade where the lower part of the cutter is an upcut, and the upper part is a downcut, so chips are pushed towards the middle of the cutter. This means that neither the top or bottom of a board will experience major chipping. There's an example of a compression bit here.

For completeness, if you want to get really advanced then you can also get upcut, downcut and compression-cut bits with chip-breaking edges which look serrated and break the chips into very small chunks, which will give you super-fast cuts with little resistance. With these cutters you'll see some lines from the serrations, so they're typically only used for roughing or where surface finish isn't important.

If you want to get really really advanced then you can get cutters which are combined roughing/finishing cutters where you have one edge which has a "chip-breaker" profile followed closely by a continuous (straight-edged spiral) finishing edge which would more or less take a cutter from a 3-flute spiral to really being a 6-flute spiral. These are also available in compression-cut bits! If you look here you can see some of these bits (scroll to near the bottom and look at the "Tornado" cutter). They're pretty advanced and not cheap, but if you're looking to do CNC routing of melamine-faced or ply boards at blistering speeds, then that's what you'll need. A bit outside the realms of what's used in the home-shop though!

You should use spiral blade bits whenever you can, that is:

The advantage of spiral router bits is that you do not "hammer" a blade into the grain and pull it out again all the time, tearing and pulling wood out. Instead, the router bit cuts very continually without going "in and out" of the grain, much like a blade that you pull smoothly through the material. You work with very little vibrations and get a very clean cut. Also you can "plunge" nicely.

Lastly, the spiral transports the wood shavings away (the "right" or "upcut" spiral, anyway), further increasing precision, and also reducing friction and burn. Using a "upcut" spiral, you get more shavings in front of your vacuum's muzzle, and less in other places. Using a "left" or "downcut" spiral, you can do a pulling cut, which is said to yield an extremely accurate upper edge (but I haven't tried that one, I prefer the "upcut" spiral's ability to transport away the shavings).

15
How and when should I sharpen my router bits?
11
Router tears wood, leaves streaks
7
Can I run a router bit over its max RPM?
8
How to determine if a router bit is safe to use?
3
What router bit type should I use on screws?
5
Is a long router bit safe?
6
Proper bit selection for plunge router?
4
Struggle to cut material with router, dull bit?
2
Router bit without shank
2
What guidelines should I follow for selecting a bushing for my router bit?