I'm trying to build square shelving out of 15mm (5/8") plywood without using screws, so no pocket holes either. I'm trying to drop screws, I feel like it's much easier to do repetitive work with a table saw than with a power drill (I actually use four drills so that I can make the sink hole, shank hole, pilot hole and drive the screws readily — haven't found a sink drill that matches the shank hole I need, it'd need to be thicker, so I do these separately) and also much easier to align the pieces later when I'm using dadoes or similar joinery.

Tried tongue and dado and it broke during assembly, as expected — so many people claimed it worked for them on forums, so I gave it a go, I've got a kerfmaker and it's really easy to make dadoes with it. I guess it would work with solid wood, but not plywood.

I can't do box joints because my table saw will not accept dado stacks and also dado stacks are really hard to find in my country.

I've done rabbets, but I don't really trust them without screws. Is this silly? What other easy joinery options are there that can be used with plywood for things like square shelving and drawers, that can be made with a table saw? 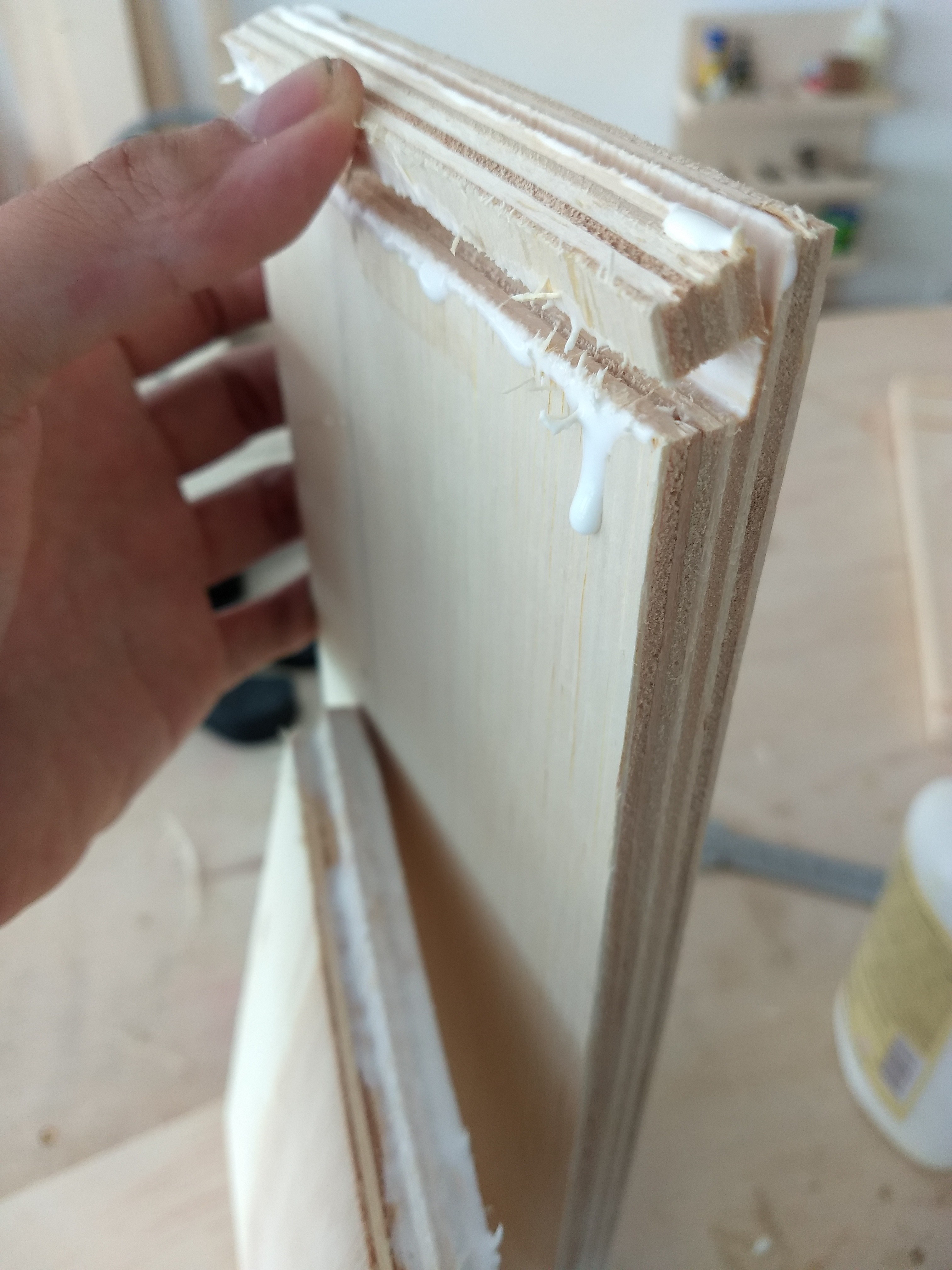 If you don't want to use screws that's fine, many woodworkers have a philosophical objection to them (not just when seen, using them at all) and they're entitled to that view. Except for utilitarian stuff like workshop storage I totally get it when the screws would be visible, I hate that too unless they're firmly part of the design1, but it is a shame not to take advantage of one of the best fasteners available.

Your objection seems largely based on the hassle of drilling the different holes needed however, which totally makes sense, but FYI they make combination bits which drill a countersink (or counterbore if you just drill a little deeper), clearance hole and pilot hole in one shot. 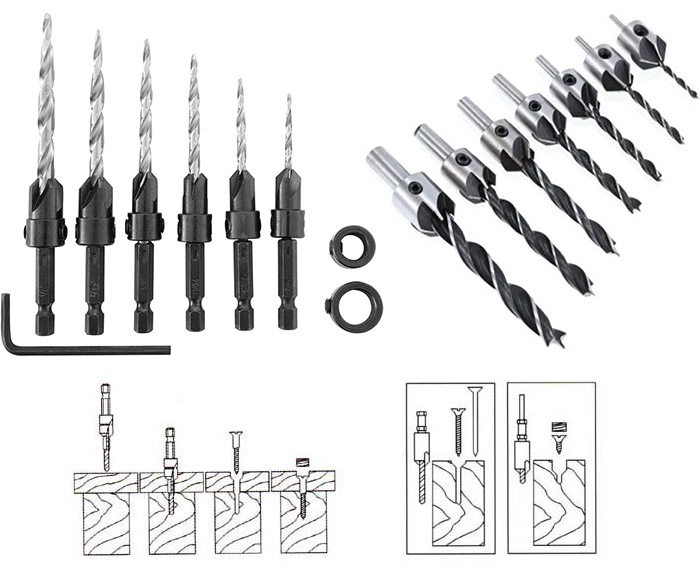 There are cheaper ones which only cost a few dollars/Euros (for a set, not each bit) and work OK, but expect to get better performance over time if you spend more. For anyone who is finding drilling of the respective holes for screws a hassle these bits could be transformative!

Tried tongue and dado and it broke during assembly, as expected

Just be aware this type of failure can be largely due to the quality of the plywood being used. Better plywood is made from hardwood throughout and tends to have superior glue joints also, although there's never a guarantee you won't get a breakage like this they're much less likely (and can usually be repaired).

I can't do box joint because my table saw will not accept dado stacks and also dado stacks are really hard to find in my country.

Many argue that box joints are better cut by a router anyway so if you have a router or expect to buy one in future bear this in mind. There are probably dozens of designs of box-joint jig freely available online so you'll have no difficulty in locating one if/when you need to build one.

As @Kromster says in a comment above box joints can actually be cut by hand too, but I feel as some others do that if you're going to that much trouble you should just do dovetails as they're stronger, look better and only take a tad more effort.

I've done rabbets, but I don't really trust them without screws. Is this silly?

Rebates are a little weak and depending on the use the item will be put to, and the loads it is expected to carry, they may be too weak if fixed with glue alone2, especially in plywood, so no I don't think this is silly. However there are other ways of reinforcing them without resorting to screws.

If you don't object to them visually and the space they take up isn't an issue you can affix thin battens inside each corner joint as reinforcements. These can just be glued in place but many glue and tack them on with a few small nails as well since this largely removes the need to clamp.

I'm a fan of dowels and I don't mind when they show so I would often reinforce a corner rebate joint with through dowels. Dowels are a superb choice for reinforcement in plywood because they are cheap, easy to drill for, have less tendency to split the material, and their length and thickness can be adjusted at will for different situations at essentially no extra cost.

Note that both of the above can also be used to reinforce butt joints, which can speed production of numerous repeat items like storage cubes.

What other easy joinery are there that can be used with plywood for things like square shelving and drawers, that can be made with a table saw?

Butt joints or mitre joints. They are the weakest joints by themselves, especially in plywood, but suitably reinforced they can be more than strong enough for service. Butt joints can be reinforced with nails, screws, dowels, 'feathers' or keys3, splines, biscuits or floating tenons; internally with glue blocks or glue strips, an epoxy fillet and arguably the crudest and most utilitarian option, metal plates. Note also that if attaching a back (or in the case of a drawer, the bottom) this can add greatly to the overall strength and can take the place of a reinforcement at that side of the box structure being built.

Highly recommend downloading Plywood Woodworking for Everybody by John G. Shea for more. This is available free on Archive.com (along with numerous other woodworking books).

1 And aren't a horrible zinc-plated colour!

2 Although sizing the 'end grain' of the ply prior to final assembly can help.

3 Keys can be thick or thin, straight or angled, rectilinear or dovetail shaped.

You might try using dowel rods to pin the corners, using contrasting wood would become a design element just my 2 cents.

Not the answer you're looking for? Browse other questions tagged joinery table-saw plywood or ask your own question.

5
Building a Cabinet with Drawers on a Budget
6
8 to 12 mm plywood box joints: brackets vs glue(box joint) vs screws
7
Are there any best practices when using dado blades or stack?
12
Quick corner joints in practice
10
Not-so-obvious disadvantages of butt joints
13
4'x8' length cut - circular saw, table saw, or panel saw?
1
How do I cut a blind half-lap T-joint?
5
"T" joint with MDF—No power tools
2
Am I selecting the correct drill bit for this job?
4
Is it possible to reinforce my plywood table?