I bought a cherry and walnut cutting block from an amateur woodworker. Inspecting the surface, there are these little pits in the wood, which are possibly table saw or planer marks that weren't sanded out. The cherry seems to have these pits more often than the walnut, but I'm not totally sure if it is a wood defect or a result of leaving machine marks.

Is the appropriate next step to try to hand sand or to use an orbital sander? Or would I have to do something more drastic? 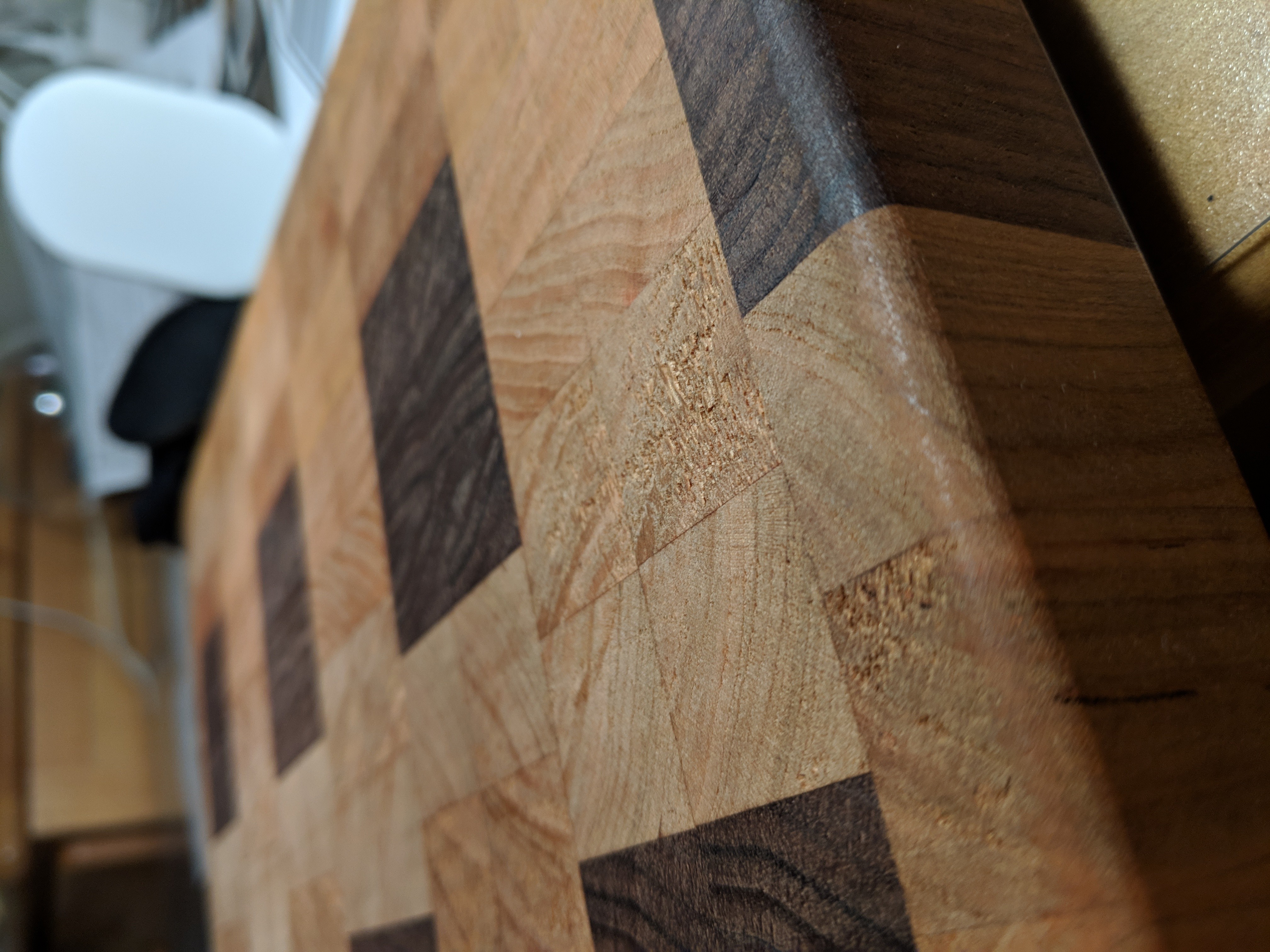 These pits are a type of tearout, perhaps more accurately described as chipout although you do see the two terms used somewhat interchangeably.

Is the appropriate next step to try to hand sand or to use an orbital sander? Or would I have to do something more drastic?

This is more about what you want to do than what you have to do since you can safely leave them.

Leave 'em
Despite what people all over the Internet opine about divots in wooden boards harbouring ebola, or something, old wooden boards have always borne lots of knife scars, chips and other defects and there's no evidence they're less hygienic as a result (as long as the board is washed regularly of course, as all boards used with wet food should be)1.

Smooth the wood off
If you do want to remove them then your two main options are planing with a very sharp plane or sanding. It won't be a fast process either way but with power sanding available certainly less effort to sand.

If you want to try planing many prefer to use low-angle bevel-up planes for end grain but any standard bench plane is capable of doing the work with only a little more effort; you'll probably need to sharpen periodically through the process as end grain is very blunting (obviously this depends on the steel in your plane irons).

If you go the sanding route I think you should start with 60 grit or even coarser2 and then work up the grits without a big jump, ending at perhaps 320.

Option #3, fill
If you degrease carefully you can fill them with epoxy. Again lots of Internet bumf about how epoxy isn't safe for direct food contact but there's zero evidence for that either, and plenty to suggest that it is. Clear epoxy fills will be largely invisible.

An alternative worth considering is to treat the board with melted wax. You're best off thoroughly degreasing here too. When applied this way wax is capable of filling practically any size of defect, although being relatively soft it won't last indefinitely and will need to be reapplied periodically if you want to maintain a flat surface. Wax fills will be more visible since they'll be the native colour of whatever wax or wax blend is chosen.

Personally I would leave them.

1 Note that this is not equally true of plastic boards.

2 Starting with very coarse abrasive on a surface that's already basically smooth sounds counterproductive but unless you're using a belt sander it's the only way to remove a significant amount of wood efficiently. I would definitely not recommend this route if only hand sanding were available because you have to work the entire surface evenly. Sanding off that much end grain, even on relatively soft species like cherry and walnut, will take approximately forever.

Not the answer you're looking for? Browse other questions tagged sanding end-grain or ask your own question.