base for "standing table" strong enough? 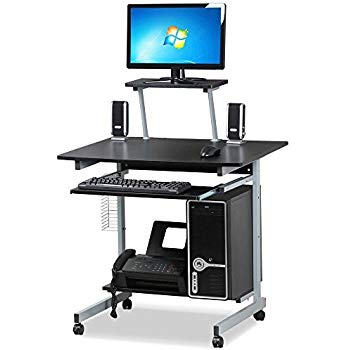 Hi, I'm trying to raise my work desk to use as a standing desk to help with back pain and concentration as cheaply as possible with minimal cutting. I'd like for it to last at least a year. Expecting load to be around 60 lbs + occasionally resting an arm on.

In the diagram, the pieces color coded the same are the same in dimension. The vertical white blocks are 3.5 inches in thickness in x-y. The horizontal pieces are 1.5 x 3.5. I'm planning to stick a few nails in the ends. The cyan rectangle on top is the footprint of my desk with wheels removed.

I'm most concerned with lateral movement at the moment. I'll have 2 monitors on top with 1 being my work monitor(lcd tablet) which I really don't need breaking on me due to failure in the base :D

My rational is that the red blocks being directly on top keeps me from having to worry about joints breaking loose from the weight of the set up. The green blocks adding stability going downward and between the thick blocks in case weight shifts forward and backward(green/red blocks facing forward and backwards). The pink blocks...I'm not too sure of but it seems like it could help with lateral stability by making an overall wider base and dispersing any lateral shift between the 2 thick blocks??

I don't know what kind of wood it is. Hurricane Michael gifted me with lots of free wood from my destroyed garage. haha I'm pretty sure it's still strong enough for this use though

Am I on the right track? Thank you

I'd actually advise against this design, because it is going to be hard to stand at. Your shins are going to constantly hit the purple members. And, as pointed out in comments, the green members don't do anything useful.

Maybe consider a "trestle" design, because there aren't much racking forces here. Similar to the design of the desk, where the stiffness comes from a few horizontal struts, the lowest of which is recessed way back to give your legs some room. Even standing, you need room for legs and feet.

Most of the racking forces are going to be in the desk itself, and that is unlikely to be transferred to the base in any significant manner. Even if you fasten the desk to the base in a manner that makes it safe (i.e., keeps the desk from sliding off the base), it won't be a stiff enough connection to have the metal legs and base actually be a single moving mass. All you are doing here is artificially raising the floor level locally.

2x4 or 2x6 construction is probably more than enough, and with static forces like this the lumber is probably stronger than much of the metal joints in that desk. The 4x4s are going to take most of those forces directly to the floor, so all you have to do is make it stiff enough to assist with that.

Any significant racking forces are going to shear off whatever you use to fasten the metal desk legs to the base (or shear the metal joints in the desk). Even beefy nylon straps (or velcro wraps) would be good enough, in my estimation, because (again) all we can do here is make sure the desk doesn't slip off.

Not the answer you're looking for? Browse other questions tagged wood furniture design or ask your own question.

10
Creating my first wooden gaming table
7
Cherry wood for dining table - Strong enough or should I consider Walnut?
3
How thin is too thin for a large dining table top? Is 11/16" too thin to properly attach to the table base?
5
Are barrel nuts strong?
3
Building a simple table base with these materials?
2
What kind of wood is thin enough to cut with a knife, but strong enough for doll furniture?
2
Does the waterfall side of my table design have a strong joint?
4
Will table base hold granite top