How to prevent epoxy from running out of wood voids 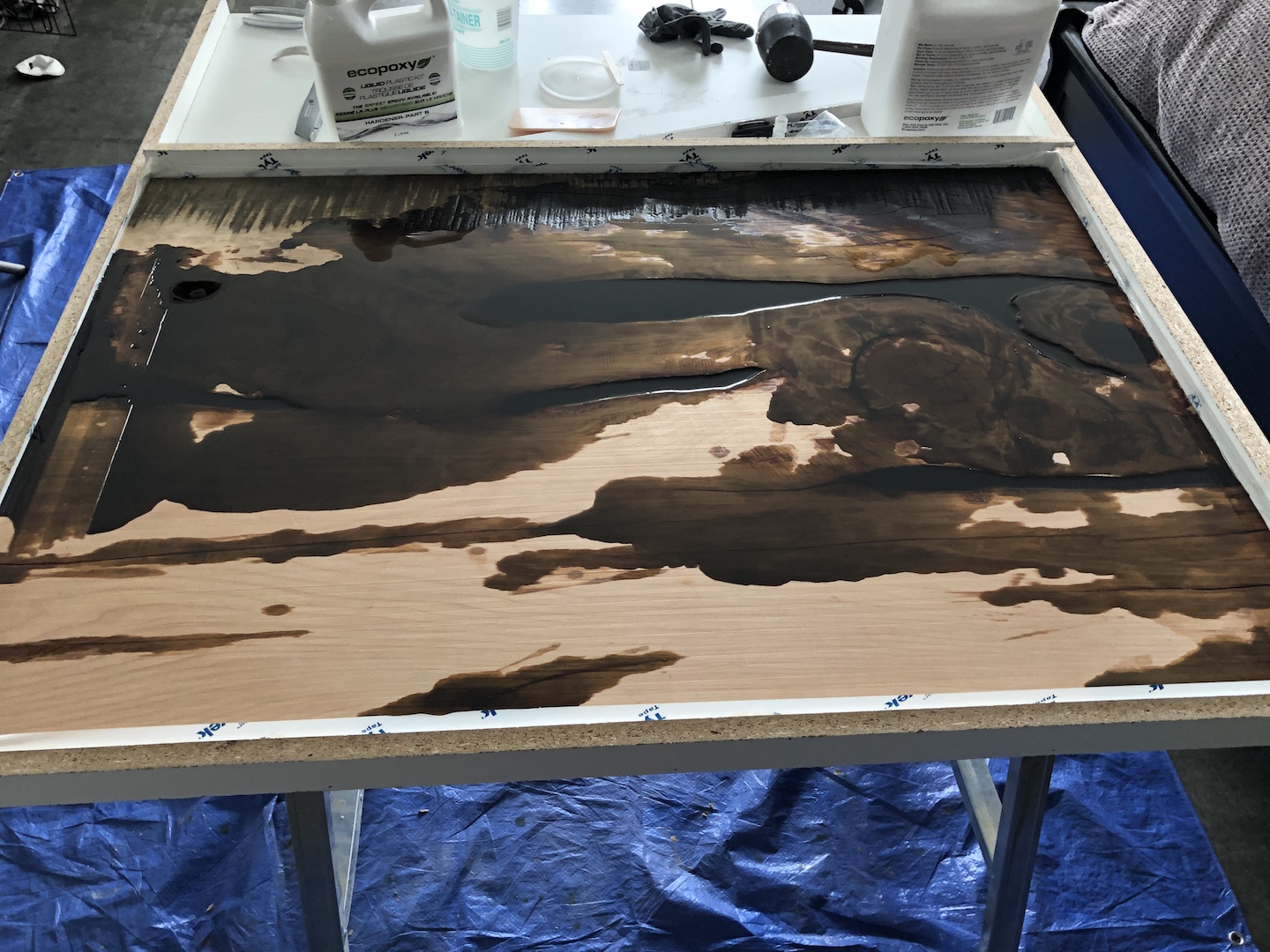 I'm building a pair of 3-drawer nightstands and using a slab of cypress for the drawer faces.

The final pour of epoxy started out fine, just "proud" of the surface in the major voids, but overnight the epoxy ran out of the voids and onto the surface of the wood.

Causes for this I think are fairly obvious in hindsight:

I'd like to pour one more batch of epoxy to fill these voids "proud" again, but this time I think a little silicone/hot glue boundary might keep the epoxy from running over again.

So the question is, should I use silicone or hot glue to prevent epoxy from running? I don't have a hot glue gun or a caulking gun, nor have I ever used either in a wood project. Ultimately, my requirements are simple:

Any recommendations for specific silicone/hot glue products to get this job done are appreciated!

Obviously levelling the slab to begin with would help here, checking in both directions and along both diagonals with a level1.

You want to be very careful using anything containing silicone around woodworking. Silicone contamination is notoriously difficult to remove (and to contain — it can spread from piece to piece with handling) and as a result it's not uncommon for people to avoid using all products that contain it anywhere in the shop.

Hot glue would certainly work, but it's going to require quite a large quantity so not sure if that's a cost-effective solution, particularly if buying the gun especially for this. And there are cheaper options anyway.

Ultimately, my requirements are simple:

Tape. Tape is your friend when working to epoxy in multiple ways, including protecting adjacent surfaces and making up dams for the back of holes that go right through the wood and for when a void runs out the side or end of a board2.

Epoxy does bond slightly to the face or edge of some tapes, but IME it's never so bad that it's a big deal and the normal cleanup that you're going to do anyway to make the epoxy flush with the wood will take care of any issues. Epoxy can also creep under the edge of some tapes if not burnished down well but it's usually minor.

Basic masking tape works all right with epoxy, although I believe that painter's tape works slightly better. But duct tape works best of all (including cheap non-brand stuff) because epoxy won't bond to soft plastics, so this would be my recommendation. And duct tape has another advantage for you here in that it's the thickest of these three options.

Because tape is conformable to a degree you could couple it with thin wood strips (coffee stirrers would be great for this) to build up a dam of significant height really quickly rather than having to use multiple layers of tape.

Other options
Worth filing away in the mental bank for future projects, dams around epoxy pours can also be made using oil-based modelling clay (Plasticine equivalent), Play-Doh and Blu-Tack and the majority of the material can be recycled for future use.

Note that all of these can leave a slight residue on wood but again this would usually be taken care of by the standard post-pour cleanup to flush the epoxy.

1 Which these days might be your smartphone (yes, there is an app for that)! If using a phone it would be best to extend its baseline by using it on a longer piece of scrap wood or ply that you know is dead square and flat.

2 Somewhat paradoxically epoxy won't bond to the sticky side of tape.

I have used hot glue on occasion to form a “dam” around the perimeter of the resin. Simple and effective. Hot glue guns and sticks are very cheap. Easy to remove later.

Not the answer you're looking for? Browse other questions tagged furniture wood-repair epoxy or ask your own question.

8
Curved wood pealing away from table edge
11
How to repair missing chunk of wood from cabinet door?
5
Voids, epoxy and staining compatibility
3
How to get writing out of a soft wood desk top
1
Can I black dye gorilla glue and use it to fill cracks in wood instead of black epoxy?
4
How to properly use dye or sawdust to color epoxy for filling voids in wood
0
High or Low RPM for sanding Epoxy layer on wood?
1
Does epoxy PSI rating really matter for wood?