What supports do legs need on a very short workbench

I'm in the process of building a knockdown workbench, following the general design of a short bench (similar to roman bench seen here).

Most of these use dowel style legs, which I am not confident in my ability to make, and the number of legs also seems to vary from 4 to 8 legs. I'd like to avoid that complexity and use a single 4x4 for each leg instead.

The current connection to the workbench top is based on what amounts to a primitive sawhorse formed by a 2x4 running between two 4x4 legs, which slots into a dado on the underside of the table:

While I've run the dimensions through The Sagulator and the components themselves should ok past 1,000lbs, I'm unsure of how it will handle racking. For reference, these are the dimensions: 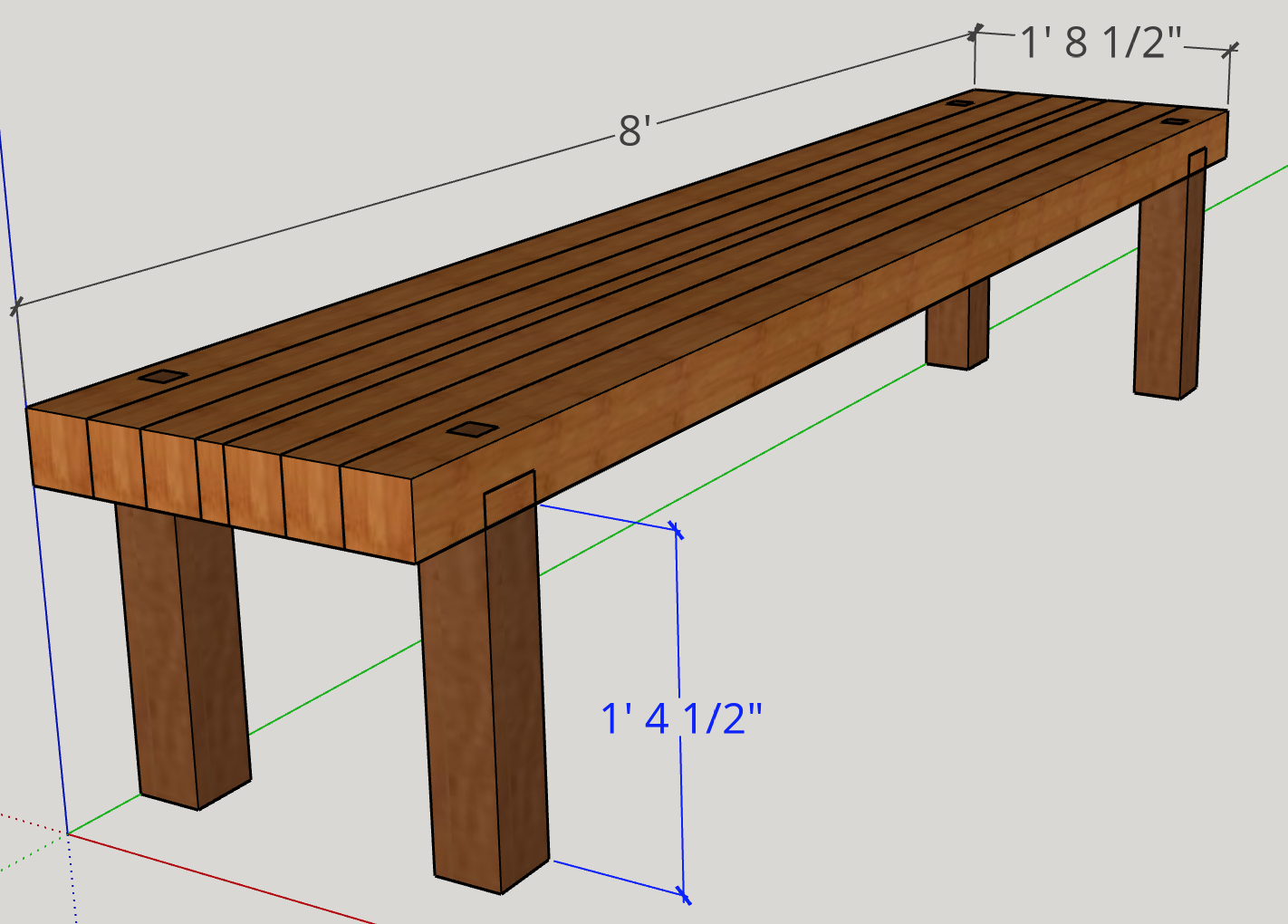 This is intended to be my main workbench, and will be used for all of my hand tool work. I've got a taller bench that's sturdy enough for working with my power tools (mostly limited to a corded drill and hand router). The tall workbench isn't heavy enough for working with hand tools, as I lose too much energy when working with the mallet and chisel. Based on my research on this type of bench, I'll be doing most of the work either sitting on the bench or standing with one foot on the floor and one knee on the bench, and will be generally closer to one of the ends than the middle.

This will probably see work for an hour or so a couple times a week in the evening, and longer on the weekends when I can swing the free time. I currently do mostly rough work, so the amount of planing will be minimal at first, though I expect that to increase as I get better (not much point to doing a lot of planing until the limit on how nice it looks stops being my skill deficit in other areas).

Additionally, my "workshop" is currently a covered back porch, so temperature and moisture control aren't really feasible.

For this to be stable, would the legs need a stretcher or other form of support?

This is intended to be my main workbench, and will be used for all of my hand tool work

A rock solid desk that doesn't shake or wobble would seem to be a requirement for hand tool work of any kind. It's the defining difference between a desk used to hold things, and a desk used to work on.

Your design has no support for lateral movement. When you apply repeated lateral forces the legs will start to wobble, and even if it is the smallest wobble it will be one that transfers to your hand tools.

My recommendation is to make the legs independent from the table top. They should stand in place firmly if there was no table top, and be strong enough to resist forces that would be applied via hand tools. This makes the table top a functional surface attached to a solid base.

One way of thinking about it is to picture yourself lifting on end of the table, and dragging it around the workplace. This places all the weight and stress on two legs. Will this weaken those legs? If just one leg starts to wobble the entire table is unsuitable for hand tools.

Not the answer you're looking for? Browse other questions tagged design workbench racking or ask your own question.

18
How can I determine the load capacity of a simple bench?
6
Small, Lightweight woodworking bench Styles
5
Design considerations for a machinist's work bench
7
Mounting the top for a new workbench
3
How to make large table less springy in the middle
4
Need Advice on Building Workbench
1
Securing long boards for edge jointing
1
How likely is it that my kids will break this bench?
1
Repurpose solid beech flooring
2
What are the pros and cons of MDF as a workbench top?