How to handplane many boards to the same dimensions

I am dimensioning aprons for a table with handtools, and trying to correct the four boards to have the same equal thickness over their entire length. I'm trying to minimize problems with uneven margins in the joinery later on.

My current approach is to make a template, where all faces are trued and square, and record its thickness with a marking (mortise) gauge.

For the N-1 other boards, I true one face and square the edges, and then mark a line with the set marking gauge around the board, using the first face as a reference. I then proceed to carefully plane the remaining face down to the line.

I often end up with some minute thickness variation along the length of the boards. I think it is due to the marking pin leaving a mark that is too large, or because I allow the gauge to lift or slip from the reference face. Are there other hand-tools or techniques offering more fidelity?

I can correct this by planing many boards together in the vice after they're squared, or after a panel's glue-up, but one drawback is that the final thickness is strictly smaller than the set thickness.

I often end up with some minute thickness variation along the length of the boards.

This is hand-tool woodworking, some variation from part to part is par for the course. We aren't machines after all1. So if the variations you're getting are already minute you're ahead of the game :-)

With regard to apron pieces, there's a bit of a dirty secret in that all four don't actually have to be the same thickness. This seems like an excuse for sloppy stock prep but sometimes it's necessary, e.g. to use the pieces you've prepped even if something unexpected happens like some tearout at the last stage of planing. Or, you have a limited supply of a given wood with the right figure, matching colour, or it's just a rare species. In either case, if one or more boards start out, or end up, thinner than the others then you just need to go with it.

What really matters with aprons is whether they appear to be even, which is down to them being flush to the legs, or set back an equal amount. So if you have some variation in thickness piece to piece you just mark out for the joinery on the legs to suit the thickness of each part and proceed accordingly.

Are there other hand-tools or techniques offering more fidelity?

There is a fairly standard modification2 that allows the pins in marking gauges to cut a finer and more refined line or you can use a cutting gauge instead (or a wheel gauge, which is a type of cutting gauge).

But even with regular pins the mark left by a marking gauge can be quite neat if you use good technique and as long as the pins are good and sharp.

The wood used does matter a lot here, it's actually really hard to get consistently clean lines in softwoods because the pin will easily sink into the soft earlywood but much less so into the harder latewood. And open-grained hardwoods like ash, oak or sapele are a bit more challenging to mark than close-grained woods like maple or beech with their more uniform texture and smoother surface.

I can correct this by planing many boards together in the vice after they're squared, or after a panel glue-up, but one drawback is that the final thickness is strictly smaller than the set thickness.

This is also fine, as again the intended final thickness isn't written in stone.

But if it bothers you having the pieces end up thinner — and it's fine to be a bit OCD about this sort of thing! — you might consider doing this procedure as part of your standard stock preparation rather than it being an additional step.

BTW for glued-up panels for many it is absolutely normal to do the final evening up/flattening/smoothing afterwards, as even using cauls or internal alignment aids you can't always guarantee every board will be dead flush with one or both of its neighbours — which is a must, even a 0.05mm / 1/500" discrepancy can be easily felt with the fingers even if not easily visible!

1 But because we're dealing in wood even if you did size parts by machine they can end up varying somewhat, because of differential wood movement. 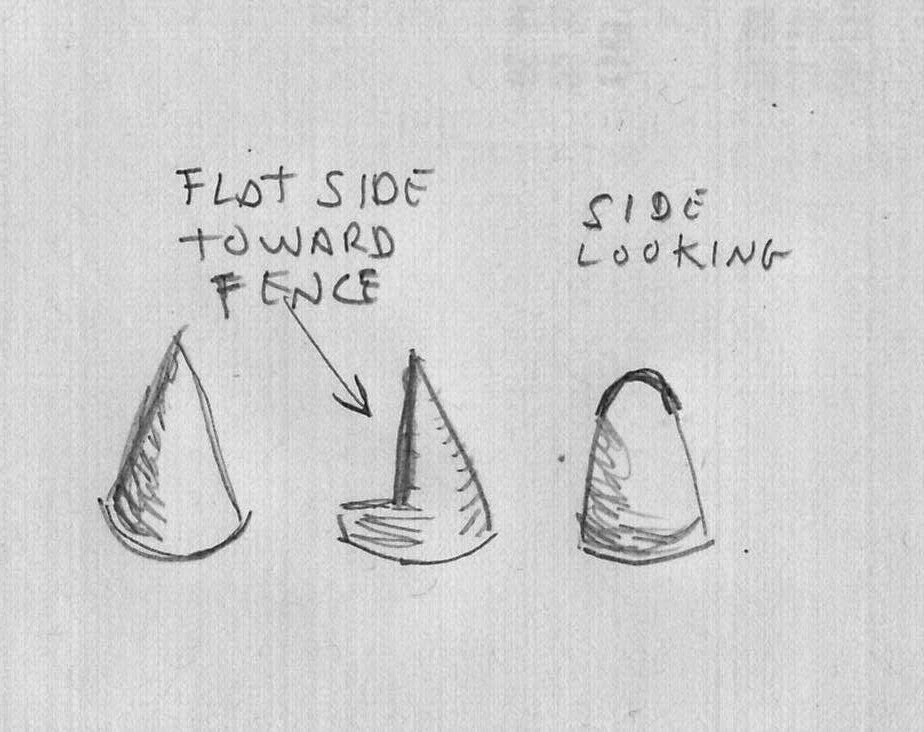 Another method to easily ensure equal thickness with a handplane is to put your board (with the already-flattened reference face down) between two runners that have been precisely thicknessed to your desired dimension. You then rest your plane's toe and heel on the runners and they will serve as depth stops, preventing the plane from going any deeper than their thickness.

It may also help to add spacers between the rails and your work piece to make it easier to avoid planing the rails.

Obviously, this can only apply to fairly narrow boards, as even a jointer plane can only reasonably span a few inches before the skew angle becomes too extreme.

For very narrow pieces you can also do the same thing with a groove of a precise depth in a wider board. Just make sure that the plane is fenced in to keep it aligned laterally, as now the edges of the plane will be the reference surface, and any lateral drift will cut down the part of the board they rest on.

23
In what cases is it useful to have more than one of the same tool?
11
How to make a good joint by hand planing both edges at the same time?
4
How do I use a handplane to smooth a cutting board?
5
How do I set up the INGCO hand plane?
6
How to make bottom face of beefy table leg flat and square with sides
6
Precise 90 degree cuts on small pieces
4
How flat is flat enough when laminating boards?
4
How to find replacement body paint for Record #07 handplane
4
How do I plane the edge of a board such that it stays square to the face?