I'm trying to figure out the best way to make clean dovetails joints using a router (maybe?). I've tried by hand, results were not so good. I got excited a while back and bought one of those porter cable router jigs. It kind of worked but chipped out great chunks of the dove tail when I tried to use it. That ended up a mess for me.

Now I was tempted by the incra router table and fence system which seems accurate at least. Someone showed me something called the woodrat which looked interesting at first but started to look a little hokey as the demo video went on.

I was all excited to get an incra table but then I thought, is this just going to chip everywhere like the jig? So I'm not sure the best route to go.

I'm a moderately experienced hobbyist, and I don't have a router table yet. About the most complicated thing I've built is a crib with mortise and tenon joints. I want to be able to make dovetails to make drawers and boxes.

I have tried several different router-dovetail jigs with varying levels of success. I have had the most success with the Keller Dovetail system. I was at a woodworking show a few years ago, and saw it being demonstrated by the inventor. I was pretty skeptical about it being better than the others I had tried, but he handed me the jig, took about 1 minute to explain how it worked, and then I cut some perfectly fitting dovetails on my first try.

Some caveats: the jig does require some setup, and doing the setup correctly is very important (mostly milling a very square piece of wood to attach it to, and making sure it is aligned perfectly). Once the initial setup is done, you can cut dovetails or finger joints. My test project was a small pine box using the finger joint bits with the jig. The dovetail version came out just as tight. 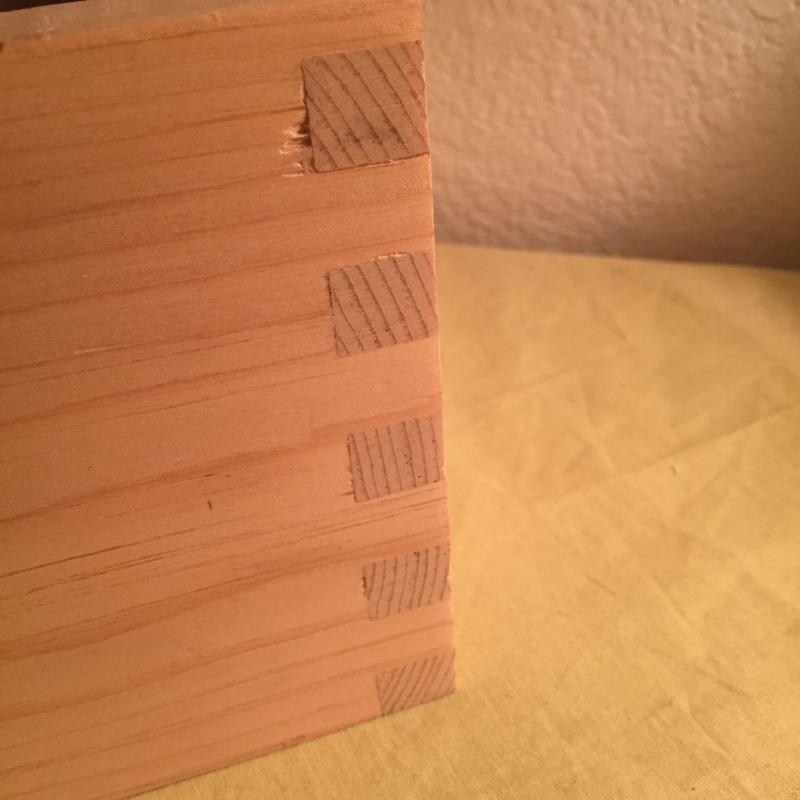 I also have the PORTER-CABLE 4210 12-Inch Dovetail Jig. It works well for half blind dovetails but you have to be careful about the boards not slipping. Some self-adhesive sandpaper along the clamp mechanism really helps with that.

I have tried the Leigh jig and the Omnijig. Both are very versatile but are considerably more complex to setup and for an infrequent user such as myself, it was more work than it was worth.

Not the answer you're looking for? Browse other questions tagged router dovetail or ask your own question.

8
What is the best way to cut pergola ends?
9
How to make exact copy-ring templates?
12
When it comes to dovetails what is the significance of 1:6,1:7,1:8
19
How do experts make dovetails by hand that fit so well?
9
How does Frank Klausz achieve a >90 turn with a turning saw without cleanup when cutting dovetails?
4
pine panels with minor cupping suitable for dovetails?
3
Router, how make a deep plunge cut?
3
Best way to hollow-out mantle (at least 4" deep)
1
What is the best way to cut a dovetail on the end grain
2
Dovetails with undermount drawer slides