The triggers on my green Bosch power tools are all extremely precise and they feel very lubricated. My Metabo drill on the other hand has a terrible trigger. It feels like plastic grinding on plastic. Fine control is impossible. Hence I use the Bosch drill for small screws. Is there way to fix this?

The Metabo is new and it's always been like this, so this is not a wear issue. Similar or same models at the store also have this problem, so it probably isn't a manufacturing defect.

It sounds like plastic on plastic, with particles tossed in for good measure. If you aren't concerned about opening the case, consider to do so while looking for fragments and particles that are causing this problem. Brush them out or blow them out of the area of the trigger.

Once opened, application of a teflon (PTFE) or silicone based grease may provide additional improvement. Avoid petroleum based lubricants unless you're certain there will be no degradation of the plastics involved.

There may be no particles within the switch assembly, but poorly engineered mechanisms and poorly manufactured mechanisms will behave in the manner you describe. It's been my experience that warranties are mostly useless and are rarely a reason to avoid improving your work experience.

There's a possibility that the trigger assembly is a rack and pinion, a linear segment with teeth. These teeth could have bumps and ridges remaining from the production of that part. There could be other moving components with similar flaws from the molding or assembly.

Dismantling carefully the switch (Watch for flying springy thingies!) and running fine sandpaper or a fine file over the engagement area may clean up the problem.

If you prefer to avoid opening the housing, you may be stuck with a glitchy trigger finger.

Maybe not a great answer, but I think it needs to be said:

This sounds like a caveat emptor experience. If you don't want to service the tool yourself, and you don't think you can return it, put it on the "extra tools" shelf and budget for a new tool with the "feel" you now know you want.

We've all bought tools that didn't feel right, and feel is a hard thing to quantify. You know it when you know it (and I'm speaking as a lefty, here).

Or, at least, don't self-service this tool until you know you can make it worse and can live without it, or have the budget for a better replacement.

It may also be worthwhile making a polite complaint to the manufacturer. It could very well be a bad batch, or something they are tracking. Tool manufacturers (well, the semi-pro and pro manufacturers) live and die on word-of-mouth, and many of us stick with the names we already know, or saw in the hands of an old-timer. (Er, pun not intended.)

Well I opened my Metabo BS18. This is what it looks like inside: 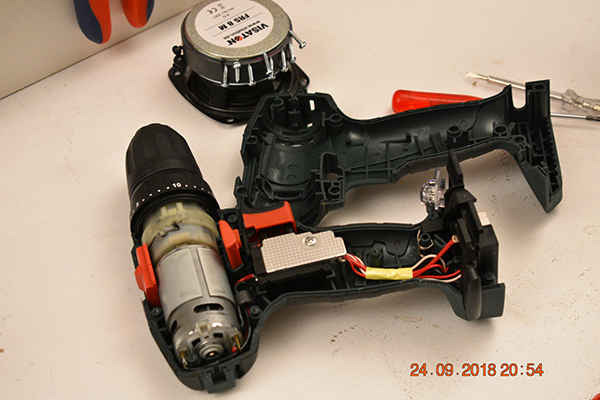 This is the trigger itself: 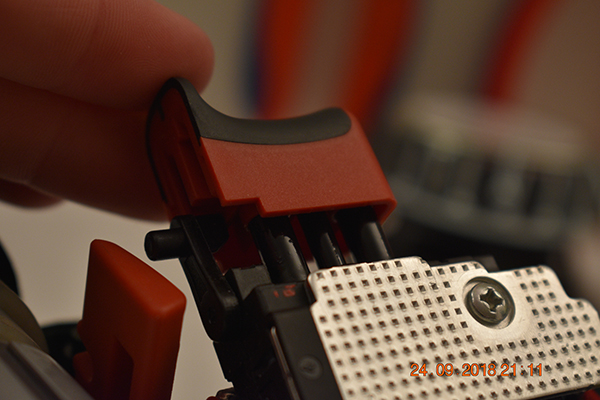 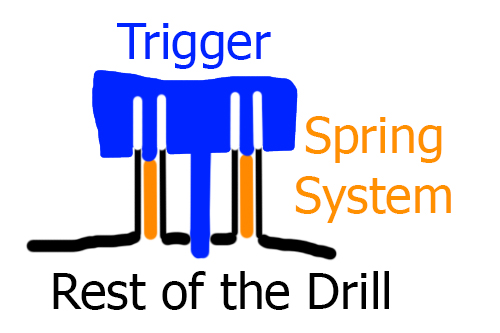 You have a piece of hollow plastic wedged inside another tube-like piece of plastic with a spring system inside. If there are any lateral forces involved it will create a lot of friction. If pressing straight down it works pretty smoothly (Not as smooth as the Bosch though). I added some lube to it (the gap seems too narrow for grease, I might try another time) but it didn't improve a lot.

So it turned out to be really poor design by Metabo and its sad that I had to open the drill and study the trigger to learn how to use it. You actually need to learn how you wrap your fingers around the trigger and remember where to put them everytime you take this drill in your hand. It takes a little practice. Maybe they should have put this into the instruction manual :) I will certainly notify them of this.

This is a recording of me doing it wrong first and then "correctly": https://www.youtube.com/watch?v=OycFe77rEvE

EDIT: I went to the store yesterday - rant: I tested out a variety of different Drills. The BS18 from Metabo indeed has a terrible incredibly rough trigger. The Metabo 10.8V BS had a very good trigger. The 10.8V SB seemed to have a slight delay between pressing the trigger and the drill actually starting which felt very sluggish. I tested some Makita, Bosch and Einhell as well. The triggers were anywhere between perfect and somewhat rough. But none, not even the cheapest were as bad as the BS18. However the BS 18 isn't even that bad once you learn how to use it, it requires a different grip and then you're fine. Perhaps the people that tested it at Metabo hat strange hands. However none of the triggers got even close to how good the trigger is on the Green Bosch PSB 18 Li-2. It's perfectly smooth, and it seems like its the only drill to have logarithmic progression. It's an 18V but I love this drill for small screws because of the insane fine control at slow speeds and also the center of weight that is in front of your hand unlike other drills. I read many reviews of the PSB 18 and none mentioned the different weight balance (which can cause the drill to tip over more easily, but reduces handshake) and the logarithmic trigger. Too bad most people don't look into these things in detail. Bosch green innovations are pretty awesome at times. The trigger is something like this: 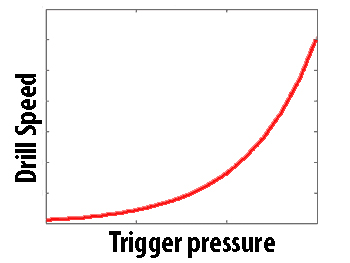 Not the answer you're looking for? Browse other questions tagged power-tools oiling or ask your own question.

26
How can I store hand tools so they won't rust?
27
When, if ever, is it safe to use gloves with power tools?
12
How do you make mortise and tenon joints using power tools?
5
How can I taper a slightly misaligned board with a handheld power planer?
9
What tools can I use for carving
3
Planing boards with the nearly useless hand-held power planer
8
Winter and my tools
1
Power tool for cutting roof battens