Mouth of a Plane

I often read about planes that have adjustable mouths, that you can make smaller for finer shavings.

How does this work? Isn't the size of the shaving a function of how much the blade protrudes? It makes sense that a large mouth allows larger shavings to pass.. but why would making the mouth smaller help for finer shavings?

I often read about planes that have adjustable mouths, that you can make smaller for finer shavings.
It makes sense that a large mouth allows larger shavings to pass.. but why would making the mouth smaller help for finer shavings?

A smaller mouth1 is not to allow the plane to take finer shavings (a plane with a large mouth can take fine shavings just as easily as coarser ones) it's for improving the quality of the planed surface.

So how does mouth size control surface quality? 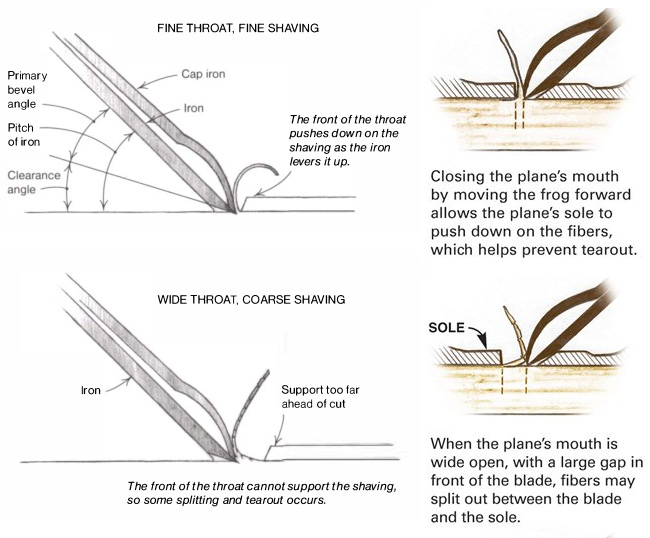 These images show double-iron planes which complicates the picture slightly but they're the only clear illustrations I could find. The same principle holds for single-iron planes, for which mouth size is of critical importance.

But mouth size doesn't have to matter
Mouth size became something of secondary importance with the development of the cap iron..... sometime during the 18th century O_O

Prior to this all planes had single irons and mouth size was directly linked to the quality of the surface you could produce as the above images show. Note: almost all of these planes had neither moveable frogs nor adjustable mouths, it was just that those for producing finer surfaces had narrower mouths than those used for rougher work.

But the double iron changed all that. The shaving rising up from the cutting edge encountered the front surface of the cap iron and caused it to roll forwards sharply (or 'break', hence the other common name for the cap iron, the chipbreaker) which forces it to lose leverage and prevents it from being able to tear wood out ahead of the advancing plane iron2.

Use the cap iron or mouth size, not both
A tight mouth and a close-set cap iron is a recipe for a blocked plane! So if you want to use mouth size you must move the cap iron back slightly so as to leave sufficient clearance for the easy passage of the shavings.

If you want to use setting of the cap iron to control tearout then a wider mouth doesn't matter much, or at all, so you can adjust the frog to a particular setting (usually right back, so the mouth is fully open) and basically leave it there permanently.

1 Something worth emphasising is that most planes don't have adjustable mouths per se, on the majority of planes the mouth is fixed, but the irons are mounted to a moveable block (the frog) and this can move forward and back to narrow or widen the gap in front of the mouth.

2 The cap iron must be shaped correctly and positioned properly to provide this effect. A great deal has been written about this so do read up on this further, but much of the key info can be read here in this previous Answer, hand plane controls (bevel down)

Wood is not totally rigid. As the plane iron is cutting the wood it is pulling the wood up. This force is transferred ahead of the shaving and the material flexes up slightly. This causes the shaving to get thicker. In the extreme this can even cause fibers to split out ahead of the blade. Having a smaller mouth prevents the wood from pulling up into the throat of the plane and keeps the shaving thinner.

7
hand plane controls (bevel down)
9
Which edge of the plane's mouth should I file if I want to open it up?
5
How to flatten stubborn hollow on the back of a plane iron?
4
How to remove staining caused by a clamp
4
Eclipse style honing guide changing blade geometry & preventing tight mouth setting on planes
1
Tips and Ideas for Hand Planing a 11,950 N board keeping it simple