I recently inherited a Craftsman model 397 bench grinder that runs and is in reasonable shape. Here's an image of the grinder with the wheels and guards removed. 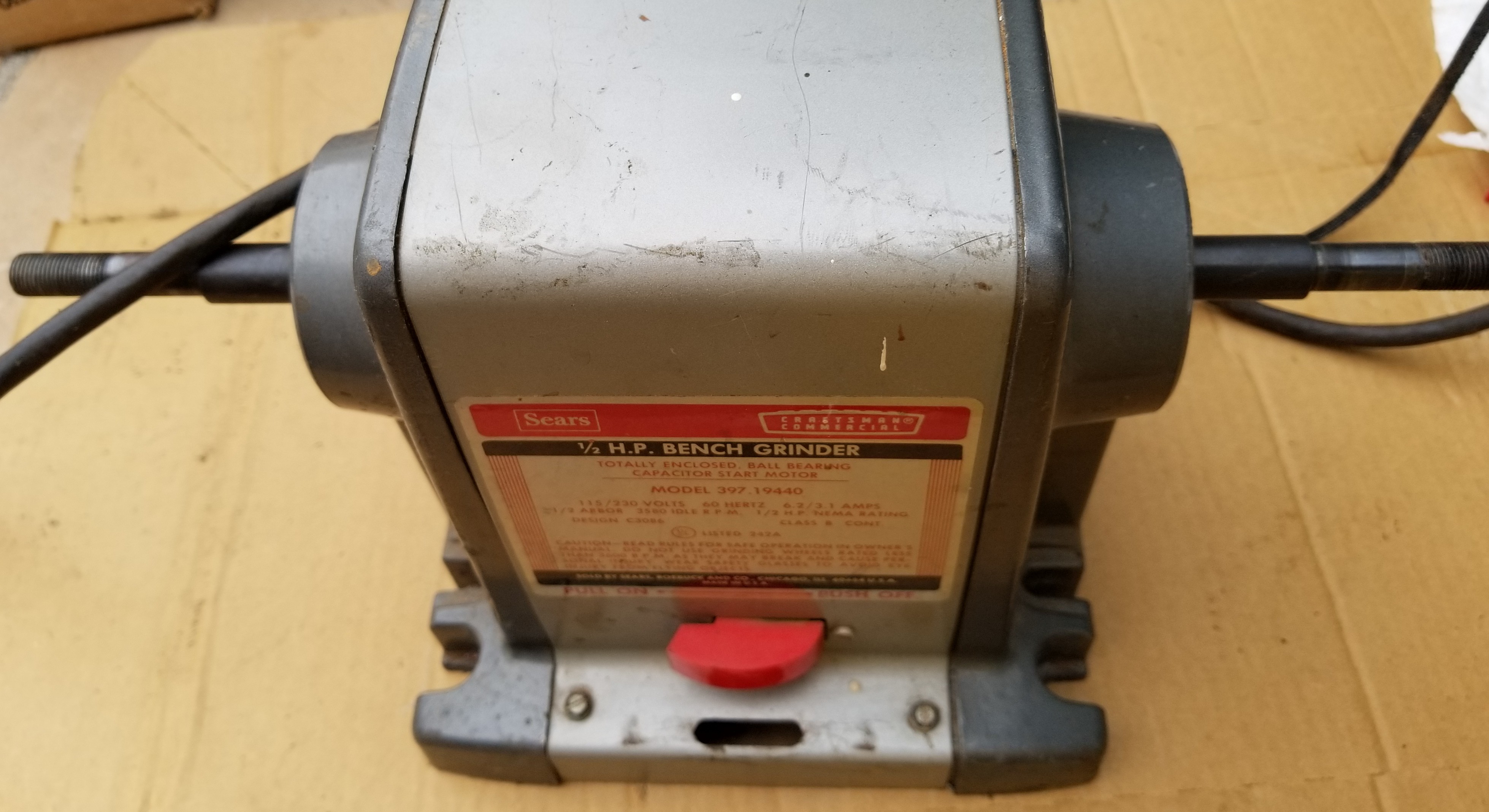 My main question is whether anyone has had success mounting CBN (cubic boron nitride) wheels on this older grinder? Do you think it's possible? The current wheels are 7" and the grinder's got a 1/2" arbor. I haven't seen many offerings for 7" CBN. Do you think I could mount 6" CBNs and have this configuration work for grinding gouges, etc.? I'd prefer a wider CBN wheel (say 1.5") but it looks like I'd need to take the guards off on at least the outsides to accomodate the wider wheel.

The grinder runs in the 3500RPM range, but from what I've read, it's possible to patiently grind especially on CBN so as to not overheat the tools.

Do you think it's possible?

In theory at least, yes. Older grinders have been updated with later, more modern, wheels constantly through the years as improvements in abrasives have been made and it's not uncommon to see pics of grinders from the 50s and even earlier sporting brand-new wheels.

CBN is just one of a succession of upgrades offered since these old grinders were first put into service.

Do you think I could mount 6" CBNs

As a rule of thumb you can mount a smaller wheel than standard to a grinder — all conventional wheels wear down over time so at some point in their lives they will be a smaller diameter than when bought. There's no difference to starting with a wheel of this size.

Obviously this does presuppose that the wheel fits, both in terms of arbor diameter1 and the thickness of the wheel — over-thick wheels can be a problem, both as to mounting on a shorter arbor and whether they will fit within the guard. As you've already identified at least part of your guards may have to be removed to fit a 1.5" CBN wheel you're aware you may have to run the wheel sans guard, so do be sure to wear eye protection EVERY TIME you grind as a bare minimum of safety precautions2.

You might be putting lipstick on a pig
CBN wheels are a definite upgrade to any grinder they can be fitted to, but to use them to their full potential the grinder should be a certain minimum quality, i.e. it has to run true enough that there's almost no vibration. As you have an old Craftsman there's some chance that's not the case, so you may want to test how smoothly it is running before shelling out for one or more CBN wheels.

You can check this by running it with the current wheels removed and if the bearings are in good shape and the arbors are straight it should run very quietly indeed. Should you find the bearings are worn they'll be a common part and are inexpensively bought and easily fitted.

so as to not overheat the tools.

You're probably already aware of this but in case not, your woodturning tools are likely HSS (high-speed steel) at minimum and as such you don't generally have to worry about overheating when grinding. HSS can literally get to red heat without going soft or being otherwise adversely affected.

"Oooo shiny." or really needed?
Of course CBN wheels have other advantages in addition to their cooler running but if this is the primary reason you're interested in getting one you should bear the above in mind. Many full-time turners and busy amateurs have not made the jump to CBN so it's not universally considered a must-have even for those who must grind frequently nearly every day.

As to normal chisels and plane irons which you mention you also want it for, for the majority of non-professional users they can easily be considered overkill. For bench tools, most non-pros have to form or reshape bevels so infrequently — if at all, I've never done either on new tools — that using more conventional wheels which cut much more slowly can't be considered a serious handicap.

1 Wheels with a hole larger than the arbor size can still be fitted successfully using a bushing, a spacer with a smaller hole at its centre. These can be bought (they're widely available where grinding supplies are sold) or user-made (there are numerous guides to this online).

2 Eye protection is advisable even when guards are in place. The reason I'm emphasising this it is that there are so many YouTube videos and woodworker blogs where guards and other safety features are not being used, and even the most basic safety precautions are not being followed. Regardless of whether this is just for photographic purposes it's still helping to develop a lack of awareness of fundamental safety practices among new woodworkers who learn primarily or wholly using the Internet.

Not the answer you're looking for? Browse other questions tagged tools or ask your own question.

6
What are the handles/wheels called when making a homemade vise (like a moxon?)
7
What to look for when buying a tap and die set (for wood)
12
Best method for drilling a larger diameter hole at an angle
10
Easiest way for a beginner to reduce a pine board's width by 1/2"?
9
Making a small indent/crevice/depression for a ball
4
What are more specific names for these two types of bench-top belt sanders?
3
What other uses are there for a shop press?
8
Substitute for Pocket Hole Jig?
4
What tools can I use for doing this type of semicircular groove?
2
Is a bench top jointer better than no jointer?