How can I round edges in places where no router, plane or sanding block can reach?

When building boats, I often have to round edges of various parts so that they are less prone to breaking, and less likely to hurt anyone who might hit against them. However, more often than not, these edges are located in tight places, often near inside corners or other structural elements, which completely prevent usage of even a small router, block plane or a sanding block. I have made several very small (5 cm) long sanding blocks with a groove and a sandpaper strip, but even the coarsest sandpaper takes forever to round an edge to a large radius, and the lack of accessibility of these edges makes this kind of work very tiring and inconvenient.

I do try to round the edges of parts before installing them whenever possible, but sometimes that can only be done after they are already glued in. My question is, what other tools can I use to round these edges even in the tightest and most hard-to-reach spots?

EDIT: I thought I'd add a specific example. Take a look at this photo.

It shows the inwale on the sheer of the boat (the railing with spacers). Every edge, inside and out, has to be rounded to a significant radius, so it is comfortable to use to lift and carry the boat without hurting fingers. However, a router cannot reach these short lower segments, because the side of the boat is in the way. A plane or sanding block cannot either, because these segments are too short. And this piece cannot be rounded prior to installation, because of other restrictions. The only way I can round these corners right now is with a steel file, held at a very awkward and uncomfortable position, taking a very, very long time at each segment. Surely there must be a better way to do this.

The only way I can round these corners right now is with a steel file, held at a very awkward and uncomfortable position, taking a very, very long time at each segment. Surely there must be a better way to do this.

Use a strip of sandpaper or emery cloth. Drop one end through the hole and hold the ends with each hand so that the abrasive runs over the edge you want to round. Depending on the roundover radius you want, start with a coarse or medium grit to remove material quickly, and finish with a finer grit.

Graphus calls this "the shoeshine method" in a comment below, and I'm adding that here because I think it's very descriptive of exactly the motion that's required. The sanding blocks that the OP describes will take a long time to work because of the short stroke. Using both hands to pull a flexible abrasive strip across a corner will be much faster because you can take long strokes.

If you aren't familiar, they use a sharp square edge (as opposed to a knife edge) to scrape away wood. A hook is generally formed on the edge using a burnisher. 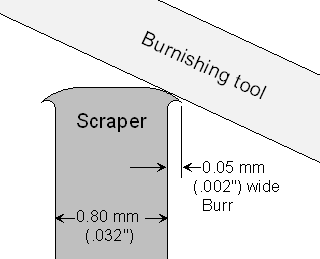 Some people make them from old saw-plates but they might be softer than is ideal. Purpose built ones are cheap. A sharp one will take shavings like a plane, removing material at a far greater rate than sandpaper will.

The ones shown above might not be ideal for getting into tight spaces but they are simply a bit of hard sheet steel and can be shaped however you want. You could shape one to have a concave profile on the end of a narrow projection.

Long handled versions are available that might help you get into tight corners: 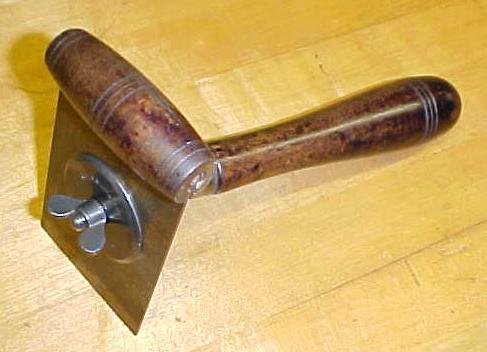 A similar tool, used to make small profiles, called a scratch stock might also be appropriate. They can easily be made yourself and you can either buy blades or repurpose bits of old bandsaw blade. 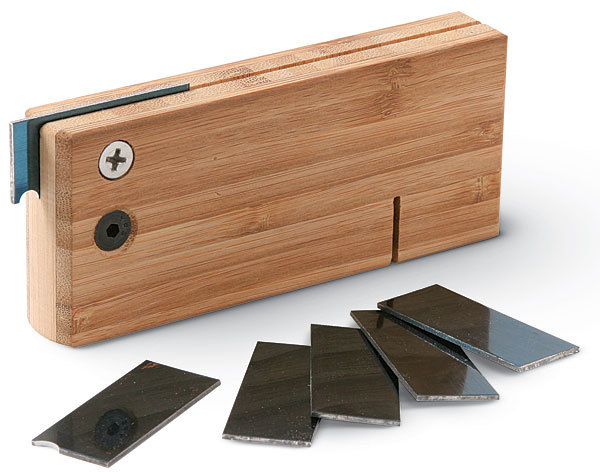 These tools are all good at getting into awkward areas and will remove material at a much faster rate than sandpaper or a file.

Could be as simple as buying a Dremel tool(if u need to pick up skill first go practice) find the right Dremel accessory there you go. It might also work with freesmachine if you find the right drill/bit

I cannot see the picture from here so I may be off by 90 degrees. I was surprised how well a good sized gouge or a big sharp chisel can be used to knock off 90% of a corner's radius. What may be blocking the way now may work to steady the side of the gouge. I prefer a gouge since it will have its own curvature to start with. The bevel should be on the outside if you don't have much room. Good luck.

Right, so I'm all for DIY in the shop - always seemed silly to give over lots of cash for something I could whip up...

So start with a Google(or whatever) image search for "radius plane". There are many designs out there, but many of the cheapo ones share a common design: two upside-down "U" shaped knives held at a long angle to the work inside the body of the plane. Bevel on the knife is on the outside of the "U" if you look at it from the end. Radius sizes vary, I used a 3/16 because my need was to clean for a finish 1/8. You can do this to any size.

Maybe you have one in a drawer somewhere? Something a lot of us have but don't use much. If you're already doing what that pic shows, you probably do have one!

I made task-specific tools for just your purpose from the knives in these - using an old screwdriver shaft, a dremel grinder stone, and a welder.

First, abandon the body of the plane entirely. Won't need it, and on mine anyway it never would stay 'set' anyway.

Since the knives (as made) are meant to be run at an angle while inside the body, the "inner" or "lower" leading tip may interfere when you get to a corner. (Some have the U end at 90 degrees to the length, but mine had the cutting edge sitting at about 20 degrees backbevel with the tips of the U forward of the bottom.)

If they aren't 90 degrees on the end, use a tiny grinder of some sort (dremel, whatever) to grind off one of the sides of the U such that when looking at it from the side it is offset by roughly 20 degrees from the other side of the U. Re-sharpen that newly ground end to a similar back-bevel as on the remaining part.

Do the same on the other knife, but taking off the opposite side. You now have a set that lets you do that size radius into opposing corners.

Snag a couple smaller old and messed up flathead screwdrivers from your junk drawer and grind an angle on the tip - about 45ish degrees or steeper - it's to be used as a draw handle so it needs to set the knife against the work well.

Tack weld the screwdrivers to the knives, such that the centerline of the screwdriver blade is along the center-bottom of the "U". Lets it stick 'out and up' or 'out and down'from the work, keeping the handle out of the way.

There ya go - It's a set of handled, draw-cutting, opposed corner knives that will let you rapidly remove the stock to a level that leaves remaining sanding work a fairly minor job. Often it was a single-pull task to clean all but the 'skinny strip of 180 grit' work off.

I wish I still had them so I could just post a picture, but they're long gone... I've been out of that industry a while now. Ugly looking, but they worked a charm when kept sharp.

I also had a smattering of old lathe tool "stubs" (too short to use on a lathe anymore) that received similar 'one-leading-tip-backed-off' grinding treatments to allow me to clean larger radius work right into corners by 'rolling' into the corner with them.

Hope this made enough sense and is helpful, if a tad longwinded.

Not the answer you're looking for? Browse other questions tagged sanding roundover or ask your own question.

1
How to sand round edges
3
How are these toolmarks happening, and how to prevent / get rid of them?
4
Sanding small corners of panel doors when refurbishing