How do you plane end grain?

I tend to like power tools, because I need a lot less 'skill' to get the same quality product. However, I do like learning hand tool techniques and sometimes they are just as good or better than power tools. Sometimes faster if you only have one or two 'pieces' to do, instead of setting up the power tools to do it.

So I keep catching comments in different places about planing end grain. Do you need special planes? Special technique? Just use a beltsander? :)

What kind of plane and how do you use it (them) to plane the end grain of a board and are there any gotchas to look out for?

In Western woodworking at least low-angle block planes are favoured for planing end grain. These will generally give the best result, but any plane can do it if the iron is sharp enough and you take a very light cut.

Terminology note: a plane's blade is traditionally referred to as an iron, in older books sometimes as the cutter.

are there any gotchas to look out for?

Yes, breakout of the long grain at the edge of the board is always a concern. There are three common ways of dealing with this.

The first is to plane in from both ends, but I find this least satisfactory because you tend to see an obvious difference in the finish of the end grain (because the tips of the 'straws' are facing in opposite direction they catch light differently).

The second is possibly the simplest and is 100% effective, which is to clamp a piece of scrap wood onto the edge of the board which supports the long grain at the end of the cut. This is the method I favour personally.

The above techniques are shown in this image. 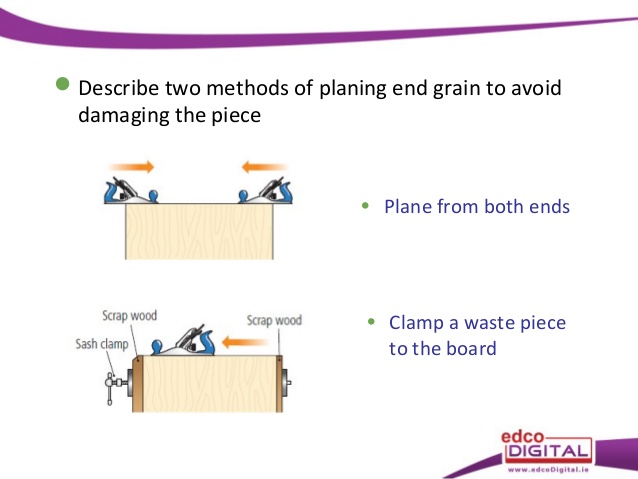 The third method is to plane a small chamfer onto the end of the board, then plane down to meet it. Note this does not always work, so I would advise not relying on it for any critical job.

Another general tip that can help regardless of the technique used is to dampen the end grain, which makes it softer and therefore easier to shear through. You can use water, although you risk raising the grain on the faces of the board, so some woodworkers instead use denatured alcohol (UK: methylated spirits) or mineral spirits (UK: white spirit).

Joking aside that isn't the worst way to deal with finishing end grain on a board, as long as you can hold the 90° angle accurately. Although you will commonly want to sand beyond the grit that belts are available in.

For end grain a razor-sharp blade is most important, and you can skew your cut to slice the fibers rather than chop them.

The type of plane isn't particularly important, but one with a low cutting angle works best. For instance, you can use a low-angle block plane or a bevel-up jack plane with its blade sharpened to a low angle. You can also convert a bevel-down bench plane to a low-angle plane by replacing its frog with a low-angle frog.

For reference, a low-angle block plane typically has a 12 degree bed angle and 25 degree bevel angle, for a combined 37 degrees.

I just hand-planed several dozen blocks for an end grain cutting board using my shooting board.

It worked pretty well, there was minimal tearout on maybe 10% of the blocks. I could have improved on this with a sharper blade and tighter tolerances on the shooting board.

A temporary shooting board is pretty easy to make, might be worth a shot!

Not the answer you're looking for? Browse other questions tagged plane end-grain hand-planing or ask your own question.

5
How do I avoid tearout when planing end-grain?
4
Straight cuts in plywood without a circular saw
3
Planing end grain - cheap vs more expensive wood
1
What plane should I get for planing an antique end grain butcher block

15
Best way to flatten boards by hand
12
What are the advantages of end-grain cutting boards?
15
Gluing end-grain
7
How do I identify hand planes?
3
My hand-planed rebate goes downhill - what's wrong with my technique?
1
End-grain cutting block surface smoothness
1
What plane should I get for planing an antique end grain butcher block
0
How do I mitigate this tear-out, ideally with hand-plane and scraper?
0
Plunge-routing into end grain