I would like to make a table leg's bottom face flat and square with the sides, using handtools.

I have drawn my knife line around the four faces for my desired length, and then proceeded to handsaw as close to my line as my skill level would allow, keeping a safety margin.

The bottom face's area (2.75" x 2.75") is too large to use with a handplane shooting board, so I've resorted to sanding with a block, but the sanding tends to eat away at the edges faster than the center, resulting in a slighly round bottom.

I'm wondering if it's one of those things which is solved with more sawing skill, or just a trip to the circular saw bench (which I don't have access to). 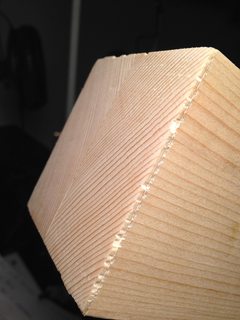 Edit after trying out planing -- block plane works quite well. no sanding.

I First tried with a bench plane (#4), which allowed okay results, but it is a bit clumsy to balance on a surface this small. It really helped to attack the edge of the piece holding the plane at a diagonal angle w.r.t. the direction of motion (i.e. so that when you make a new pass, only one point along the iron's edge is in contact with the edge of the workpiece). This way the plane gets a better chance to slice in, rather than just stop at once as soon as the iron bites. 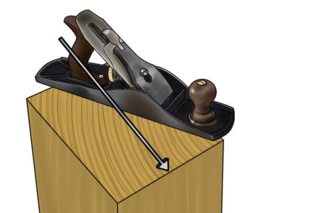 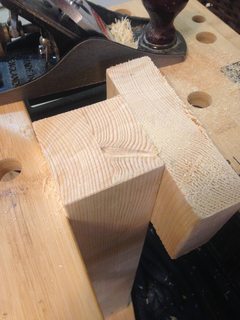 Left: illustrates the diagonal passes I mention. That image is flawed in the sense that it's missing a sacrificial piece (image is from how-to-use-a-bench-plane-to-plane-end-grain). Right: bare-bones setup on a workmate

When returning the plane to take a new pass, the throat's opening would sometimes catch into the unsupported sides (opposite to the sacrificial piece), so I've lost some small/medium chips along the front edge and corners. Closing the throat of the plane by moving the frog forward helped minimize that. It's not a setting I usually play with, but it helped in this case.

(I'll put a chamfer on the corners, so it won't be too visible)

Then I switched over to a small block plane, which was much easier to handle. With diagonal passes, and a well-sharpened iron, I was able to produce very fine shavings. Like with the bench plane, I closed the throat as much as possible. 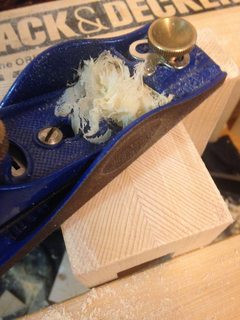 It's more difficult to plane to a true-flat with the smaller block plane, but I would go down to my scribed line on one side, then turn the next face over in my vise and repeat. This would get the four edges to be on the same geometric-plane (assuming the layout is correct). To eliminate any remaining convex profile (i.e. belly in center), I finished with circular motions focused around the center point, until I reached the same height as the edges.

The block plane (with a well sharpened iron) is quite satisfying to use, and gets me on the line, without any sanding required.

It looks to me like you've got about a 1mm of wood to remove. Hand sanding is going to take forever to remove that much wood.

Clamp a piece of end-grain to the back face of the leg, and then use your hand plane. The problem though, is that planing will have the same tendency to go at the edges rather than the centre too. The solution is better hand-saw skills, or machinery: sorry.

16
How do I make a mortise and tenon joints by hand
17
Planing thin stock without the aid of bench dogs
22
How can you make a square without a square?
10
How to prevent sticking and hopping when cutting with a hand saw?
3
How can I cut veneer with a hand saw and not chip it?
2
Fixing mistake: Filling the gap in a breadboard end on tabletop
4
How to make a mitre cut along the width of a board with hand tools
1
How to make a circular base with moulding using hand tools?
4
How do I plane the edge of a board such that it stays square to the face?