How do I set up the INGCO hand plane?

I've got a INGCO HPL01300 handplane and I'm kind of stuck on how to get started.

I have already seen many videos on how the Stanley is setup and it seems pretty easy with one nail at the back to change the depth of the blade.

Can someone please explain how the INGCO plane is setup? There are two nails that are meant to push the blade down but I am not sure how it's done.

I'm sorry if this is not a good question but I can't seem to find any instruction manual or video anywhere.

I truly appreciate some input on this.

I assume you mean this one: 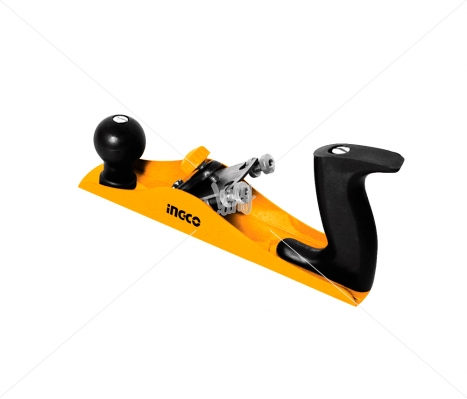 You unscrew the yellow ?plastic? knob towards the front of the plane, then adjust the position of the blade by turning the knurled knobs on top of the blade. You will need to turn both knobs at once. Once you have got the blade in the right position, you tighten the yellow knob again to keep it in place.

Just as with the Stanley, you want to adjust the position of the blade with the plane upside down, and you sighting along the bottom surface. You want the blade just visible as a bright line above the bottom of the plane, and evenly across the width of the plane (not poking out more one side than the other).

Ideally, you really want the last action on the knurled knobs to have been to push the blade out a little. This way any slack between the blade and the knob will already have been taken up.

This plane has a similar layout to the current Stanley SB4 (it has had various names over the years) and the "Windsor Design" No. 33 plane sold by Harbor Freight in the US.

The mechanism in these planes is essentially what is used in most modern spokeshaves, so searching for tips on how they are adjusted would bring up much more advice. But it's essentially very simple:

In addition to the above generally with mechanisms like this the advice is to slightly loosen the bolt that holds the top cap in place, to more easily allow for the blade to be moved, then after the adjustments are done you tighten the cap back down again to ensure the cutter doesn't shift in use.

Not a good plane
Sorry to say it but unfortunately this is the case, so I hope you don't have hopes to be able to do fine work with it.

In recent years the Windsor Design no. 33 has been made fun of online quite a lot and the Stanley version before that has been reviled for decades, and has actually been called the worst plane ever made*.

So the adjustment mechanism is already considered very poor for a plane, but in addition to that notice there is one major difference with the HPL01300 compared to the above two planes, it has a body made from bent steel, not machined cast iron which is very much stiffer and stronger.

All planes with thin steel bodies like this are cheap tools intended for only the most basic or roughest work — more construction site than anything.

*This is not true to be honest, and it represents an unfair double standard. Although compared to even a mediocre Bailey-pattern plane they are a definite step downwards with careful setup they can be made to work quite well — at least as well as simpler block planes that have no adjustable mouth or inbuilt lateral adjustment, which aren't heavily criticised compared to their (much better) cousins which do have those features.

Not the answer you're looking for? Browse other questions tagged hand-planing or ask your own question.

2
Is this plane any good for anything?

22
How do you plane end grain?
6
Fettling a hand plane
7
Static Electricity While Using a Hand Plane
5
Most general purpose hand plane for limited budget
6
hand plane controls (bevel down)
5
How should I set a hand plane down?
5
Hand plane gouging wood even with fine adjustments
4
How do I plane the edge of a board such that it stays square to the face?
0
How do I mitigate this tear-out, ideally with hand-plane and scraper?
0
Hand plane blade lower on one side