Is the MT2 Arbor for a Drill Chuck milled incorrectly?

I just purchased a drill chuck with MT2 mount (https://www.amazon.com/gp/product/B004CVJC3E/ref=od_aui_detailpages00?ie=UTF8&psc=1) to use on this lathe.

When I mount the drill chuck in the tail stock, it sits farther out (from the opening in the tailstock) than the live center. Also, the removal process of rotating the hand wheel counter clockwise far enough to get the internal bar to push doesn't work because the end of the mount doesn't reach the internal mechanism.

My measurements I took on the two arbors are:

The lengths are the same.

From what I've found in online specs for MT2 tapers, the small end should be 0.5720" and the large end 0.7000". I think this means that the arbor I have was milled incorrectly, but is this "within tolerances"? I don't think so, but I'm not sure.

I think I'm going to return the drill chuck and get a new one, but I wanted to see if y'all thought first.

Lastly, Now that I look at it again, I think the Jacobs drill chuck side may not be right either as the drill chuck doesn't look like it's far enough in.

BTW, here's a pic of the drill chuck (this is after giving it a bit of force (a decent hand push from about 1" out) to get into the tail stock. 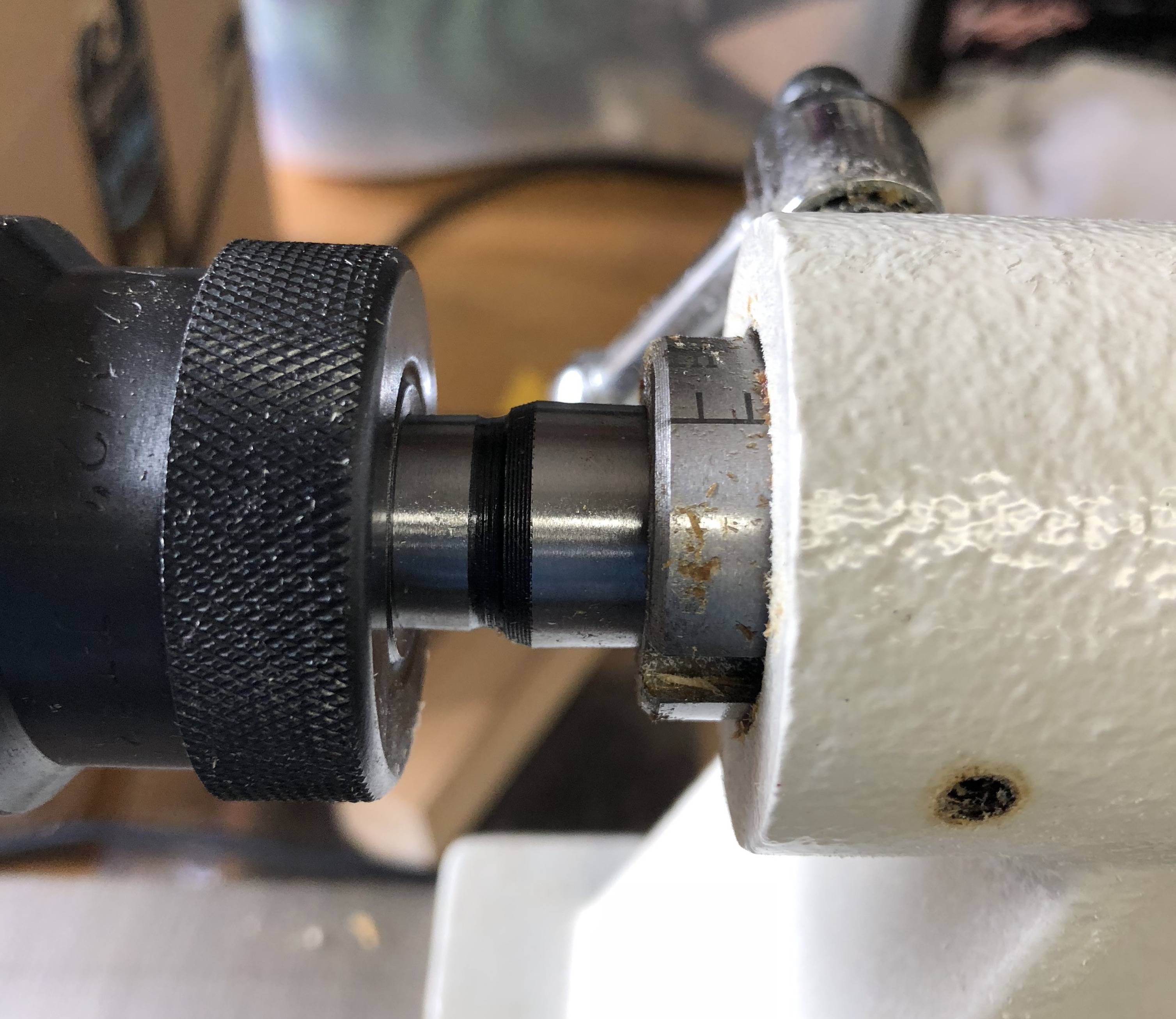 and for reference, here's the live center: 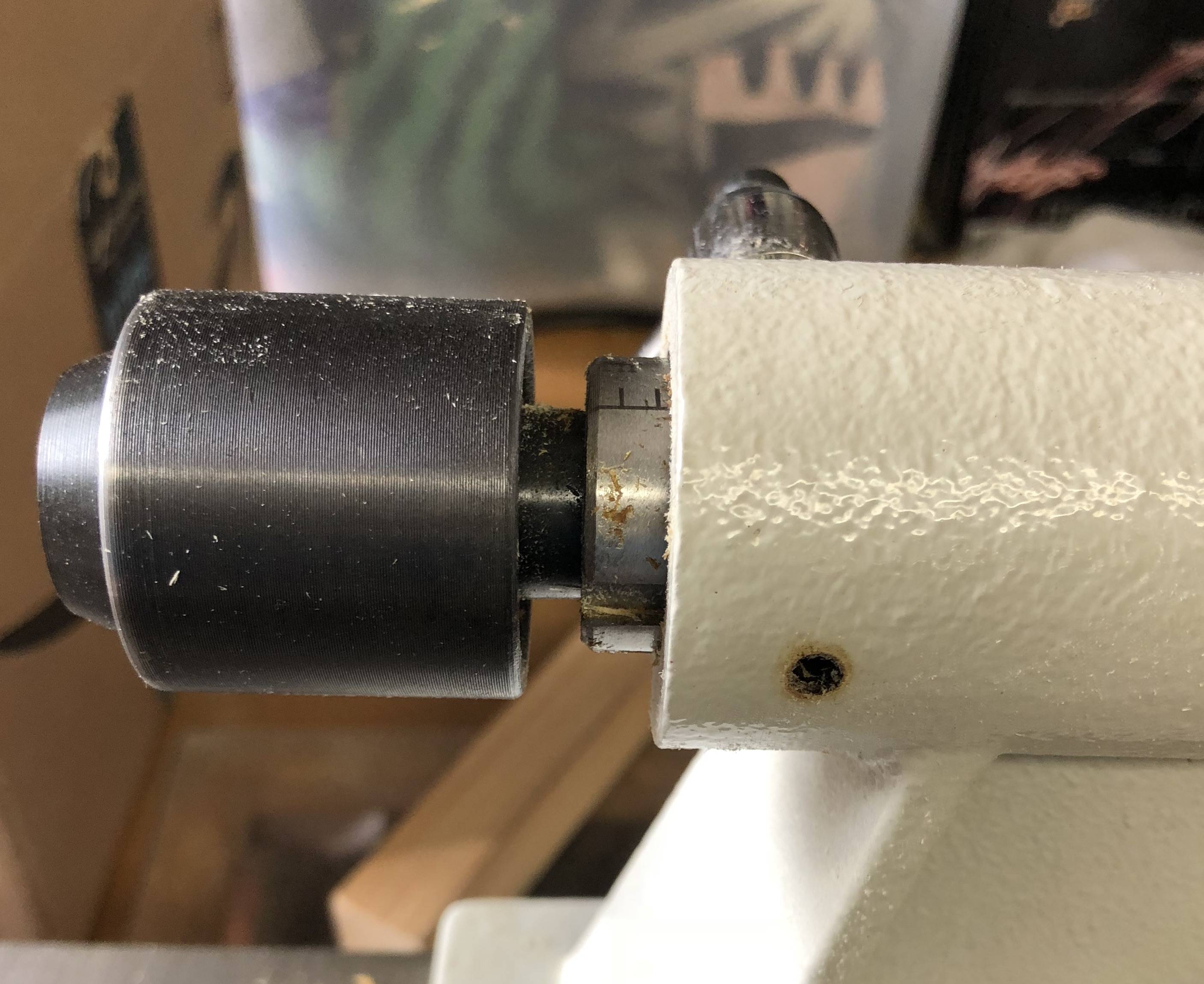 Yes it is oversize, the black band should be just proud of the chuck. If the chuck is too far from the shoulder you will have trouble removing adapter with wedges. Send it back, try again

A Morse taper (MT) drill chuck arbor like this has two tapers; one is the Morse taper, and the other is the chuck taper, generally a Jacobs taper (JT).

It looks like you have two problems. The Jacobs taper doesn't appear to be seating correctly, which likely means it's the wrong JT size for that chuck. Perhaps the chuck is a JT33 and the arbor is JT3. These are close in number but not in size, the JT3 being substantially bigger (perhaps counterintuitively).

On the Morse taper end, in my experience, there is significant variance between sources as to the length and taper diameter at a given distance from the end. This makes some more suitable for different uses, but as long as the taper itself is correct (angle of the tapered surface), it will seat properly and function. In your case, the Morse taper isn't long enough to hit the ejection pin, possibly because it doesn't have a tang, which is purposely on some and not on others. It's not necessary for it to seat flush to work correctly and there are some applications where you want it to stick out a fair amount (for example on a dead center in a headstock spindle when using a faceplate).

This Wikipedia page has more on Morse tapers and machine tapers in general.

Not the answer you're looking for? Browse other questions tagged lathe lathe-chuck or ask your own question.

12
When do you use a chuck vs. a faceplate on a lathe?
8
How do you prevent a turned workpiece from exploding while you're working on it on the lathe?
6
How do you turn the bottom of the bowl?
8
What are the specifications for "Morse Taper" sizes?
8
Best way to drill a concentric hole with a lathe
5
Identify this chuck / faceplate mounting
2
Does a 3/4x16tpi for a 5/8 plain spindle adapter exist?
0
How to use this type of chuck without grooves/teeth?
1
Identification of vintage wood lathe tail stock with 1/2-20 threaded arbor