I'm designing a pirate treasure chest out of stained/varnished softwood. All the best pirates have brass-bound treasure chests, and I'll be using brass fittings, reclaimed decorative ones if possible.

Rather than real brass-binding though I'd spray-paint hardboard, but how tight can I bend it for the domed top? I'm expecting a radius of about 180 mm (depth 360 mm). This would be the normal 3-ish mm hardboard sold in UK DIY shops, and I've got plenty of time on my hands to bend it wet and let it dry, but I don't want it to crack. I reckon it would crack if I tried to bend this radius dry.

Here's a model (Inventor) of what I'm intending to build (without handles/latch). All the flat "brass" is hardboard (real brass is either heavy and expensive or thin enough to have sharp edges). The visible screw heads (I'm not sure how many I'll use yet) are decorative (no.8 x 1/2" slotted brass) with structural screws and glue hidden under the bands. 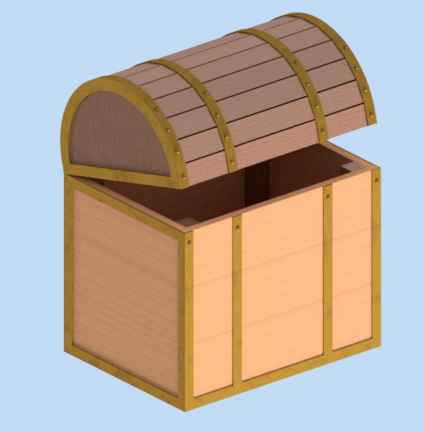 I finally got the time to try this out today. Dry was hopeless, but damp worked well (as suggested by descriptions like this one).

The first I tried to bend dry. I was planning to bend it part way then leave it for a while, but it snapped before I got even half way.

The second I brushed with water, mainly on the smooth face. A few minutes later I gently bent it (hung over a bar with some plastic clamps as weights. After about half an hour I bent it to near enough the required shape, clamped it, and left it to dry for a few hours. It held its shape when I released the clamps. It needed a light sand, especially where the water had soaked in to the cut edges, but after that is as good as new.

Update after finishing the job: It worked well, but the cut edges were raised and roughened more than I thought, and needed more sanding/undercoating/fine sanding than I expected. The gold spray paint I used comes up a sparkly silver rather than a smooth(ish) gold if the surface is even slightly rough. But the job is finished (I'm a little disappointed with my craftsmanship in places but overall it should go down very well): 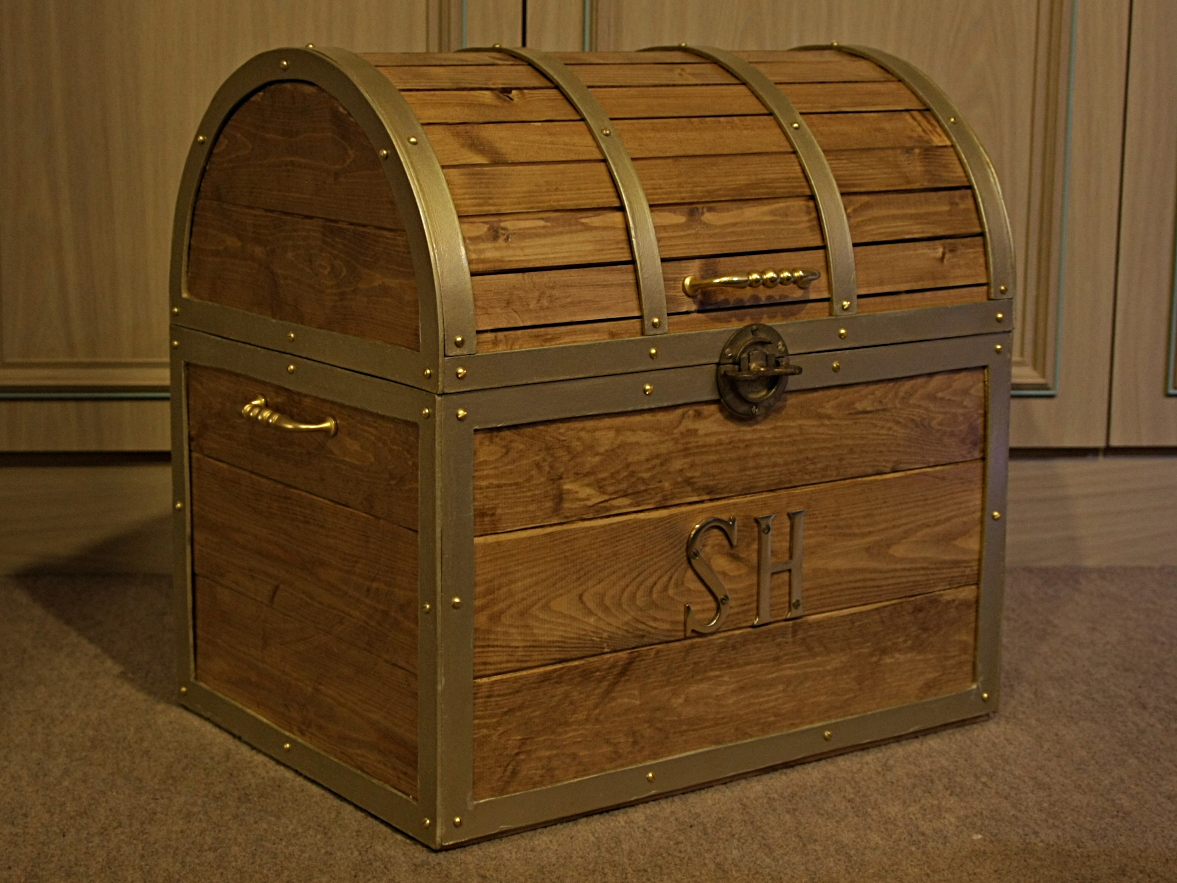 I don't think you will have a problem bending 3mm hardboard especially in the narrow binding strips. You will have better luck bending dry than wet as wet the board will swell and come apart. If you can use a ratchet strap to pull the strip down to the chest lid I think you will lessen your chances of cracking. Gluing will cause cracking less than nails or screws will.

Not the answer you're looking for? Browse other questions tagged board-materials bending or ask your own question.

8
Is green or steamed wood better for bending?
9
What type of blades should I use for machining MDF?
20
How do you straighten/bend wood planks without removing any material?
4
How can I bend plywood?
4
How to treat floor-facing edge of OSB for a stool leg?
0
Recommendations for a 3’ diameter wooden pipe?
1
Bending Wood: is it easier to bend fast or slow growing ash
9
Best wood species for extreme bends?