I'm doing a built-in for a closet. The closet is over the stairs so its front is sloped. I created an L shaped front and shelf from solid maple. The bottom foot or so is up against the wall that I can screw into. The top surface is hovering, supported by the miter (in the photo there is another shelf sitting on it).

I originally envisioned that the lower shelf would rest on the sloped wall. It currently is but that may change in the summer.

The front is mitered along its top edge and joins the shelf. I used two small pins on the very edges and just glue in between for the miter.

On the underside, I reinforced the miter (with two square 3"x3"x3/4" pieces at 90 degrees near the sides, plus a long narrower 3'x1"x3/4" piece of pine in between along most of the length of the miter, glued to the top and the front faces).

The problem I'm not sure how wood movement will affect this structure.

The main front will surely expand by at least 1/2", more than the shelf will expand inwards. This will cause the shelf to hover. With all the other stuff on top of it, I'm afraid the miter will fail.

I thought about attaching the shelf to the front face on the underside with a larger brace, corner, or even metal strip (going 45 between them). But I'm afraid due to the difference in contraction/expansion, the brace itself will force the faces into each other, breaking the miter.

I'm concerned about attached the shelf to the walls for that reason.

So my question is, is my best bet to go with the flow and just reinforce that miter say with smaller metal brackets (so there is less force from the front's expansion). That way the entire structure will rise as one.

Or should I fight the expansion? For example, I can create 45 degree blocking along the outer edges on the underside of the front. I could then screw those into the wall and screw the front panel into the blocking. That way the front panel will be attached in all four corners

I could also attach the sides that the upper shelf will rest on. If the sides are screwed into the wall, the front face will butt up against them. Would that prevent the front face from moving up? Would the wood bow or warp because the sides are being blocked but the center of the front panel if free to move up?

Additional idea I had was to actually create a 1/2 gap between the bottom part and the top part. The top part can be attached to the walls. Not sure I love this visually. Maybe there's a way to conceal the gap?

Wondering if anyone's done anything similar or has any advice. 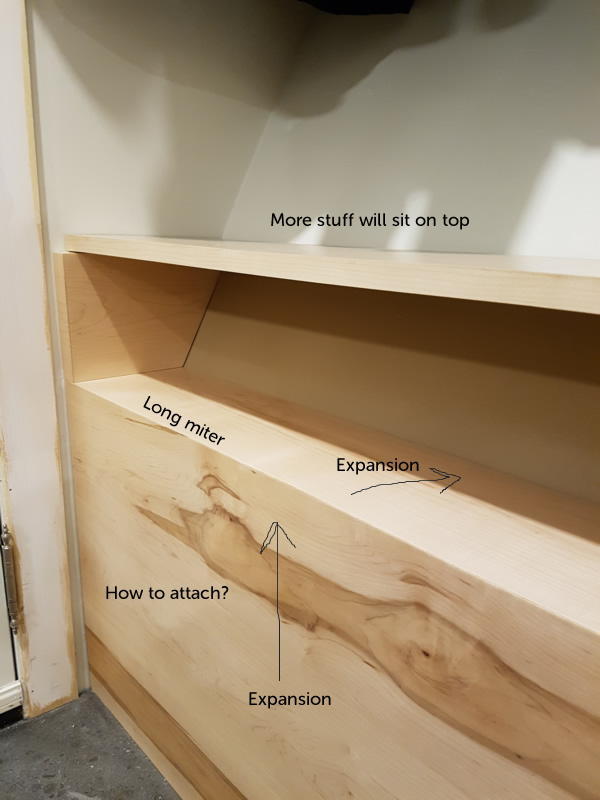 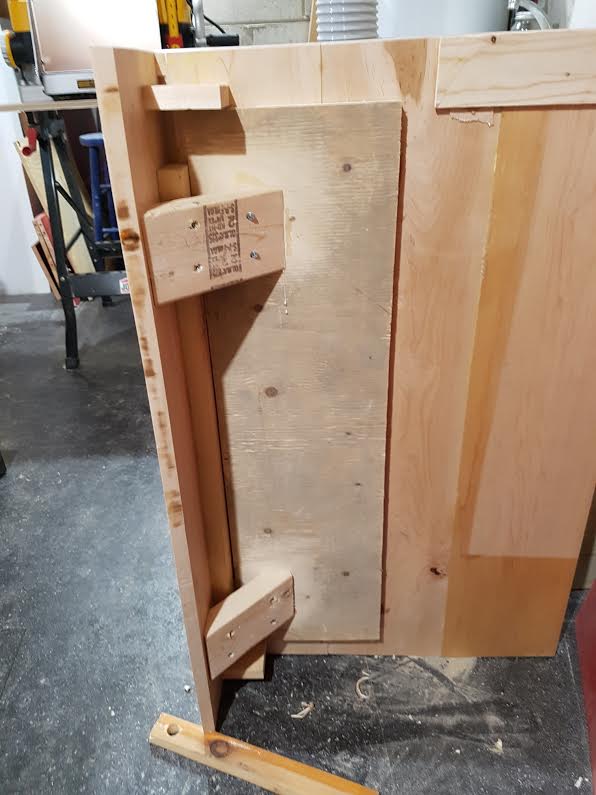 First, if the space is air conditioned, I would not worry about the expansion. The temperature/humidity change will be minimal.

The 1x3 you glued on the back side will help strengthen the miter joint. If you will have heavy loads (on a shallow shelf?) you could add another layer of 1x3 glued to the back to resist the rotation force between the shelf and front panel at the miter. It is not clear how long the shelf is but if you secure the sides to the shelf, they will be of great help in keeping the miter square. Do not secure the back of the shelf to the sloped surface, let it float.

Unless the shelf length is very long or your storing steel weights on the shelf, I would not be too concerned.

Not the answer you're looking for? Browse other questions tagged furniture wood-movement cabinetry miter-joint or ask your own question.

6
Cutting tight miter joints for a frame around an existing object
6
What part of a cabinet is the "carcass"?
5
Joining an irregular, detachable modesty panel together and to an irregular shaped desk
4
How can I flatten out a cupped piece of 3/4" plywood for a wood counter top base?
6
Thick tabletop movement
5
Shelf movement in a plywood bookcase
3
Proper grain orientation for a box
1
Wood floor movement mechanism
6
Table top attachment with aprons on only two sides
0
Back panels for wide cabinets