What's the best clamp for a hex shape?

I was using a round punch to pound a nail through wood in a confined space, and tried using a locking wrench or vise grips on the hexagonal steel handle of the punch, to keep from hitting my hand, but nothing is quite preventing me from knocking the punch through those clamps. They're good enough for one nail, but I have to readjust them afterward. Just wondering if there's another clamp strong enough to hold a chisel style handle that you're basically trying to pound through it.

By the way, I've since tried wrapping a few layers of duct tape around the hex handle, behind where the clamp is over it, and that prevented the clamp from sliding backwards, or at least it won't happen as frequently this way. Let's see, after hitting a few more nails in, it seems that the clamp will be forced to the end of the punch, no matter what, although the hammer striking its end keeps the tape from going any farther, so I guess the tape will compress as much as possible while staying even with the end, or eventually fold upwards. Maybe it will last for a box of nails though.

I was also thinking of hand guards, like some chisels have, although they aren't as common on punches (or not widely available that way). Some are interchangeable however. It just depends on how much room there is to use one. 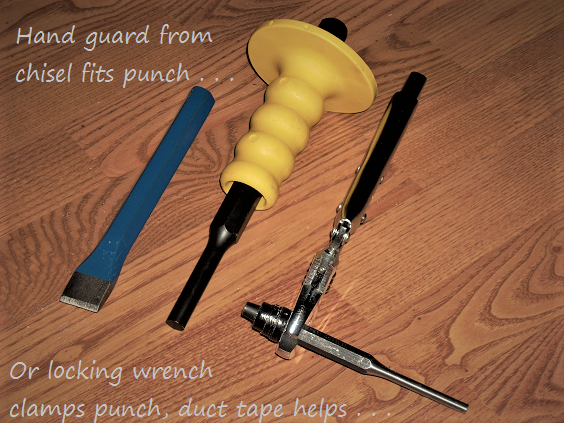 You can see examples at McMaster-Carr, search on punch and chisel holders. There are several styles shown