How tight should a dado joint be?

I know that joints should always be tight, but I suspect my dadoes are too tight.

I have done a couple of projects using dado joints. I cut using a router, either using a 3/4 inch bit, or using "undersized" bits for plywood. (I've either used an edge guide or clamped a board as a straight-edge, and this has generally worked quite well.)

When dry-assembling the joints, I usually need to use a lot of force by hand or a mallet to seat the parts and to take them apart. Sometimes I need to lightly sand the joining board thinner in order to fit. So I would say these have been very tight.

When I glue the joints, I am not always able to get the parts to fully seat in place - even using a mallet and clamps as tight as I can make them. I apply glue (Titebond III) to all contacting faces first. It feels like the glue quickly sets and I can't move the parts fully into place, but I suspect the grain is swelling so it doesn't actually fit anymore. Without being fully seated, the glue is only bonding at the edges of the joint, and I suspect it isn't very strong.

For past projects this has been "good enough" if not fully satisfying, but for an upcoming project I will need the precise fit and full strength of the joints.

Some woodworkers are of the opinion that dado joints (UK: housing joints) can't be too tight as long as you can get them to engage and disengage without splintering. Others disagree and think an "easy fit" is about right, for one reason because tighter than this will tend to scrape glue from the wood and leave the joint surfaces 'starved'.

I suspect the grain is swelling so it doesn't actually fit anymore.

Yup. This is actually not an uncommon problem and often gets people in trouble with other joints too (e.g. dovetails and Dominos).

Most common woodworking glues, including all the PVAs, have water in them so as soon as you put any such glue in contact with wood it wets it of course and it swells by a tiny amount. So obviously one possible workaround is not to use a glue that contains water for the project, or just for these joints. No water, no swelling.

I don't think that's a satisfactory answer because you should be able to assemble an entire project with the one glue 99% of the time. So, IMO if your joints are prone to this problem that's how you tell you're cutting them too tight.

Better to use a plane if available. You can take shavings off the underside of a shelf and accurately and repeatably take of just a couple of thou at a time, allowing you to sneak up on a perfect fit. Usually a lot faster and more accurately than by sanding.

Destructive testing on your part of some test joints may be the only way to satisfactorily answer this for you given the range of opinions on the matter but.....

.....most things won't be held together by dado joints only so they don't have to do all the work of keeping something solid. That means that even if each joint isn't quite as strong as it could be it's helped by its neighbours and more importantly by the other surrounding joints, all of which are maximised for strength already if done properly. Taken together it's very likely you'll end up with something strong enough for what it needs to do.

My experience is that 'tap tight' is about perfect. It should take a light tap with your hand or a wooden mallet to drive the board fast into the dado when dry fitting. Since you specifically mentioned plywood and a router, the easiest way to get a precise fit is to make a jig that is exactly the width of your boards, and use it with a top bearing (mortising) bit. 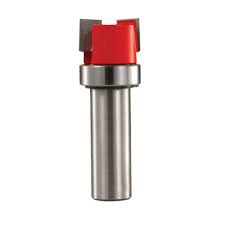 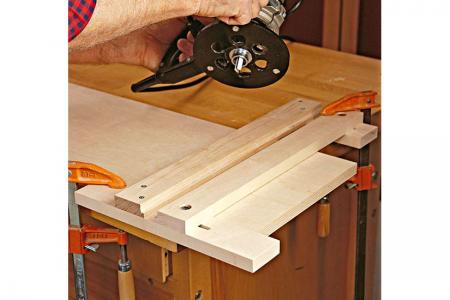 This is nice because it works for any width of dado.

Another option is to cut the plywood to fit. This was taught to me by a long time production cabinet shop manager. Mount a 3 wing slot cutter bit in the router table. Set the distance from the fence to the tip of the cutter to be equal to the depth of your dado. Set the height of the cutter to be the width of the dado. This will cut just enough off the plywood to fit tightly in the dado, and give you a joint that looks similar to this 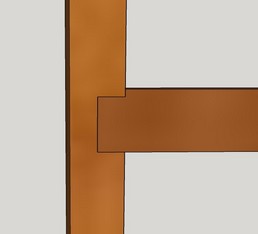 and is very easy to do in a large production environment. The downside is that your joints can look a little 'odd', but it is great for hidden joinery.

Not the answer you're looking for? Browse other questions tagged joinery glue or ask your own question.

17
What am I doing wrong when making lap joints with my stacked dado set?
5
How do I prevent the rungs of my loft bed from moving slightly in their join with the legs?
5
What joining methods would be best for the legs and other areas of a height adjustable desk?
5
Joining two flat legs of stool
1
What is so great with biscuit joinery?
5
"T" joint with MDF—No power tools
5
Edge joint failure - what is the cause?
2
Reproducing tenons in semi rough cut timber
7
How do I achieve flush joinery when the pieces need to be stained differently?