Embedding/Inlaying a gem into wood

I am making a couple of purpleheart earrings. I want to embed an amethyst gem into each one. I have a couple of concerns though. The wood is so dark that I feel it will make the gem seem dark once it's embedded. How can I address this? Should I cut a hole all the way through the wood to let light into the gem? And how should I secure the gem? I'm thinking epoxy right now but depending on if I need to drill a hole all the way through I'm not sure if I should fill in the hole on the backside completely with epoxy or leave it open.

This is what I have so far. The one on the right shows what I would like the finished product to look like. 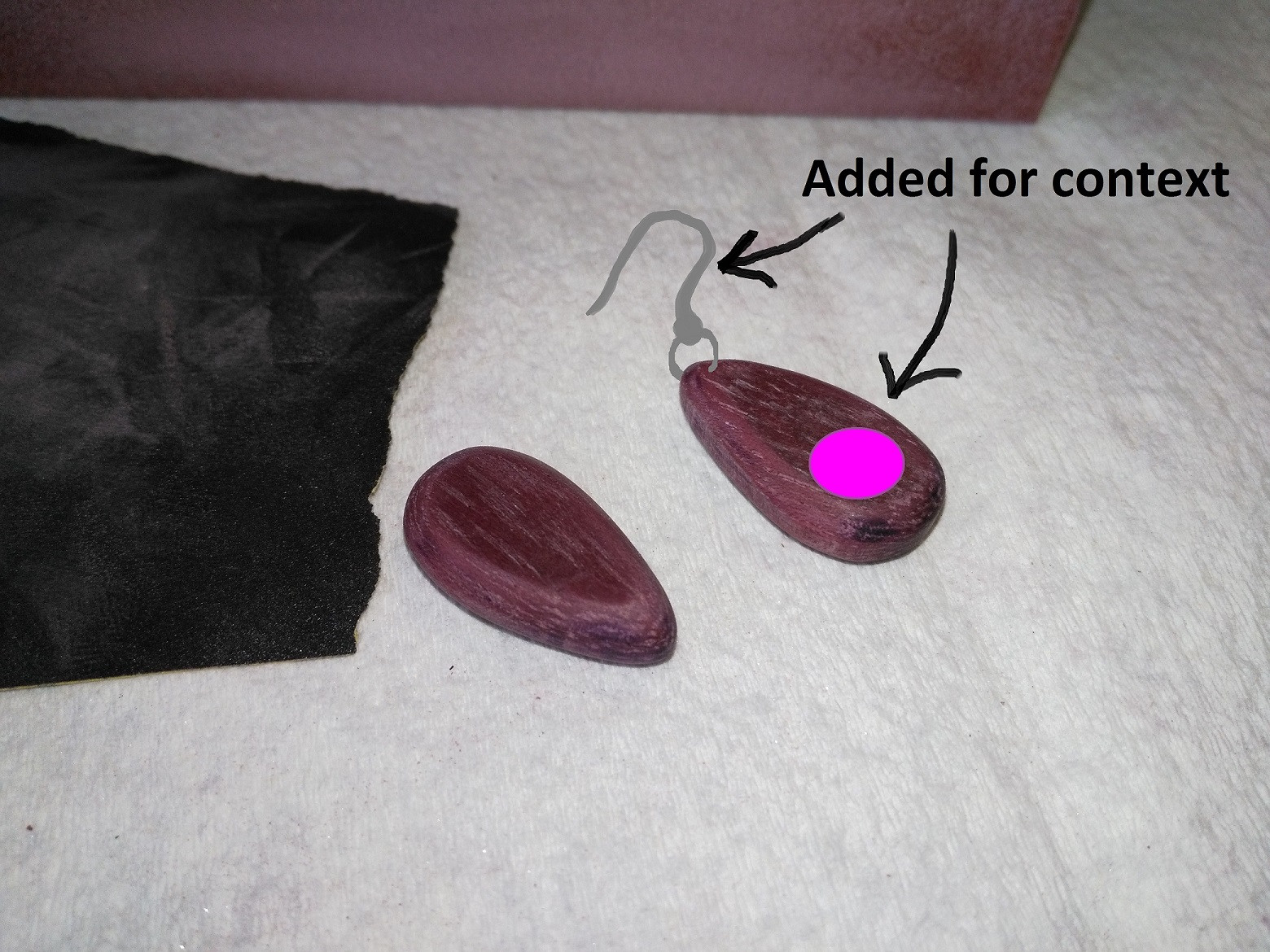 I am not an experienced woodworker, but I can offer a couple of suggestions.

First of all, if you think that the gem will look darker, you can try to have a light background in the hole (sometimes this trick is used to make look the gem darker or vivid in the jewels), to test just make the hole and put a little piece of white paper as background (bonus: you can try with different paper colors without any problem).

As you noted, another solution is to cut the hole all the way, but this change the overall look of the earrings, I don't say they will not be nice, just different.

About how to secure the gem, go for the epoxy or cyanoacrylate, just be sure they are cristal clear and, if you use the epoxy, that it has a high resistance to the UV or it will yellow with the time.

I would suggest (but it depends what you actually want, looks wise):

Drill all the way through, smaller than the widest part of the stone.

Counterbore (depending on your available tools, you might drill this part first) a hole just bigger than the widest part of the stone partway through (depth depends on where you want the stone to be relative to the surface.) I'd then suggest using a countersink to open the surface of the back hole (without removing the narrower ledge) and possibly (again, depending on depth and desired look) the wider hole as well. Alternatively, consider a thinner hunk of wood.

"Superglue" (cyanoanacrylate) is more typical than epoxy for this type of work in my limited experience. You might want a "gel" type to reduce the odds of it running where you don't want it. You are gluing the rim of the stone to the ledge formed by the smaller and larger holes.

Be aware that purpleheart tends to turn brown over time. I think it also shows up on the lists of woods people may be (or become) allergic to.

As a completely different approach that is probably a bit tricky on the small scale, you could silver the back of the stone (like a mirror.) A somewhat easier approach might be to use a standard "guitar fingerboard marker" mother-of pearl dot behind the stone (white, somewhat reflective, many sizes available, not prone to tarnish as silver not bonded to the gem would be.)

Not the answer you're looking for? Browse other questions tagged technique glue design inlay or ask your own question.

12
How do I know when my lathe speed is wrong or could be better?
3
Sculpture: Anchor a wire armature to a natural wood branch
1
Farmer Table Legs
3
In whittling how do you make the v-like cut?
2
Are there any non obvious (specifically structural) concerns to building a walk-in wardrobe
4
prevent wood bending when glue is applied
1
Can I black dye gorilla glue and use it to fill cracks in wood instead of black epoxy?
2
Is this frame design sturdy enough for a window seat?
1
Can breadboard ends hold together a tabletop without glue?