Substituting Walnut for Hickory in a bow saw

I'm planning on building a version of the Gramercy Tools bow saw. According to their research, Hickory is a good substitute for the European Beech wood classically used in such saws, since it is both flexible and tough.

On looking into the properties of various woods, I discovered that Walnut might be a superior substitute to Hickory - its stiffness and strength lies right between European Beech and Hickory, but its hardness is lower (and thus easier to work) and its density is significantly below both of them (making for a lighter saw).

Is there something I'm overlooking?

Is the lower Janka hardness of the Walnut going to pose a problem?

Or is that purely a cosmetic matter (being more prone to nicks and dings) that is outweighed by the other benefits I mentioned?

I'm planning on building a version of the Gramercy Tools bow saw. According to their research, Hickory is a good substitute for the European Beech wood classically used in such saws, since it is both flexible and tough.

I want to ask what's wrong with beech, which also grows in North America, but never mind that ^_^

Is the lower janka hardness of the Walnut going to pose a problem?

Only as far as it will accrue dings a little more readily as you were thinking, and this isn't a big deal except aesthetically.

As you might guess you wouldn't be the first person to make a bow saw from American black walnut: 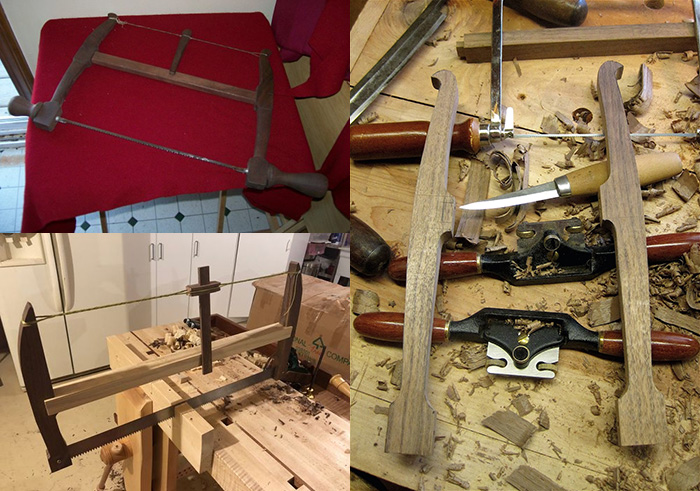 Additionally there are numerous written references to bow saws being made from walnut, so it has a proven track record in this application.

But people have made functional frame saws from softwoods, here's Paul Sellers demonstrating making one from common SPF, which pretty much tells us all we need to know about how far you can push the envelope in terms of material!

So clearly many other hardwoods would be suitable as well. In the UK it's not unusual to see older frame saws of various sizes made from mahogany which is more valued for its looks than strength. In terms of woods that are easier to come by one of the oaks would be a great choice since they're ubiquitous across the US, hard and tough, not overly heavy and generally quite inexpensive. Ash and birch should also work well.

Since many woods are suitable at the end of the day the choice can be made nearly entirely on looks if desired, or on cost, or availability, without feeling you've compromised on the final strength of the saw.

Is there something I'm overlooking?

When strength is an issue at least as important as the species chosen is the run of grain. The uprights are under great tension when the string is fully tightened so just as when making handles for heavier axes I would take care that there isn't much grain runout, even using a species known for its resilience. Grain is much less critical for the stretcher which is under compression.

One last point worth noting in relation to hickory is something that often goes unreferenced, the difference between its sapwood and heartwood. It is the paler sapwood of hickory that is specifically valued for tool handles, not the heartwood.

Not the answer you're looking for? Browse other questions tagged hand-tools wood-selection hand-saw or ask your own question.