Fixing mistake: Filling the gap in a breadboard end on tabletop

I am building a pine desk/table (with handtools, so far) with a breadboard end design. One end piece does not sit flush with the tabletop everywhere along the entire width of the panel (32" or so). Out of impatience, I gave up on tweaking the shoulders to get the perfect fit along both (cosmetic) shoulders of the tabletop (top/under). 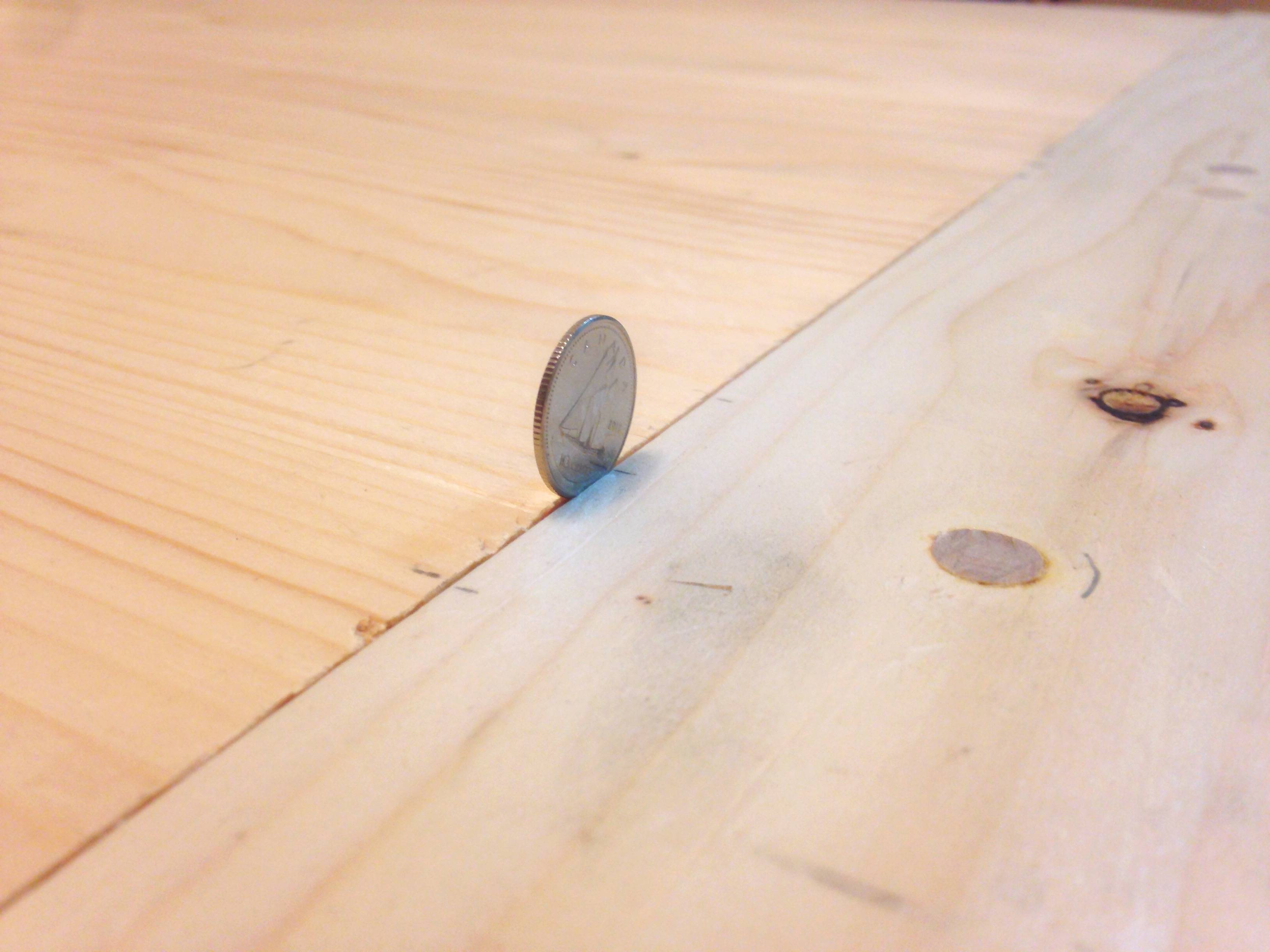 Now that it's closed up, the gap is noticeable. I also feel that debris will get lodged there. But maybe not.

I'd like to cover that gap. Is making a clean groove with a plough plane and placing an inlay between the top and breadboard end a technically feasible option at this point? What about inserting wedges, or running some sort of bead?

I see using filler is recommended in other similar questions, but it is reported to crack within a year or two, as the panel narrows/widens.

The plan is to finish it with oil, and I wonder how much of the gap will be covered by the finish.

How to avoid in the future?

I have a chance to fix the problem on the other side of the table, as I haven't closed up the other end yet -- I'm including an image of the construction (same as the one that's closed).

To close them, I have a 2"-wide strip of glue only on the center tenon, and 3/8" dowels. The dowels going through the non-center tenons can slide in elongated holes.

The only tools I have at my disposal for this, are a skillsaw (and jig) and handtools/planes (handsaws, paring chisels, bench #4, #5, block, and rabbet). I've tried using my rabbet plane as a shoulder plane along the width of the table to make the wall truly square, but running perpendicular to the grain creates tearout along the cosmetic shoulder of the table -- so I feel i'm trading one problem for another. 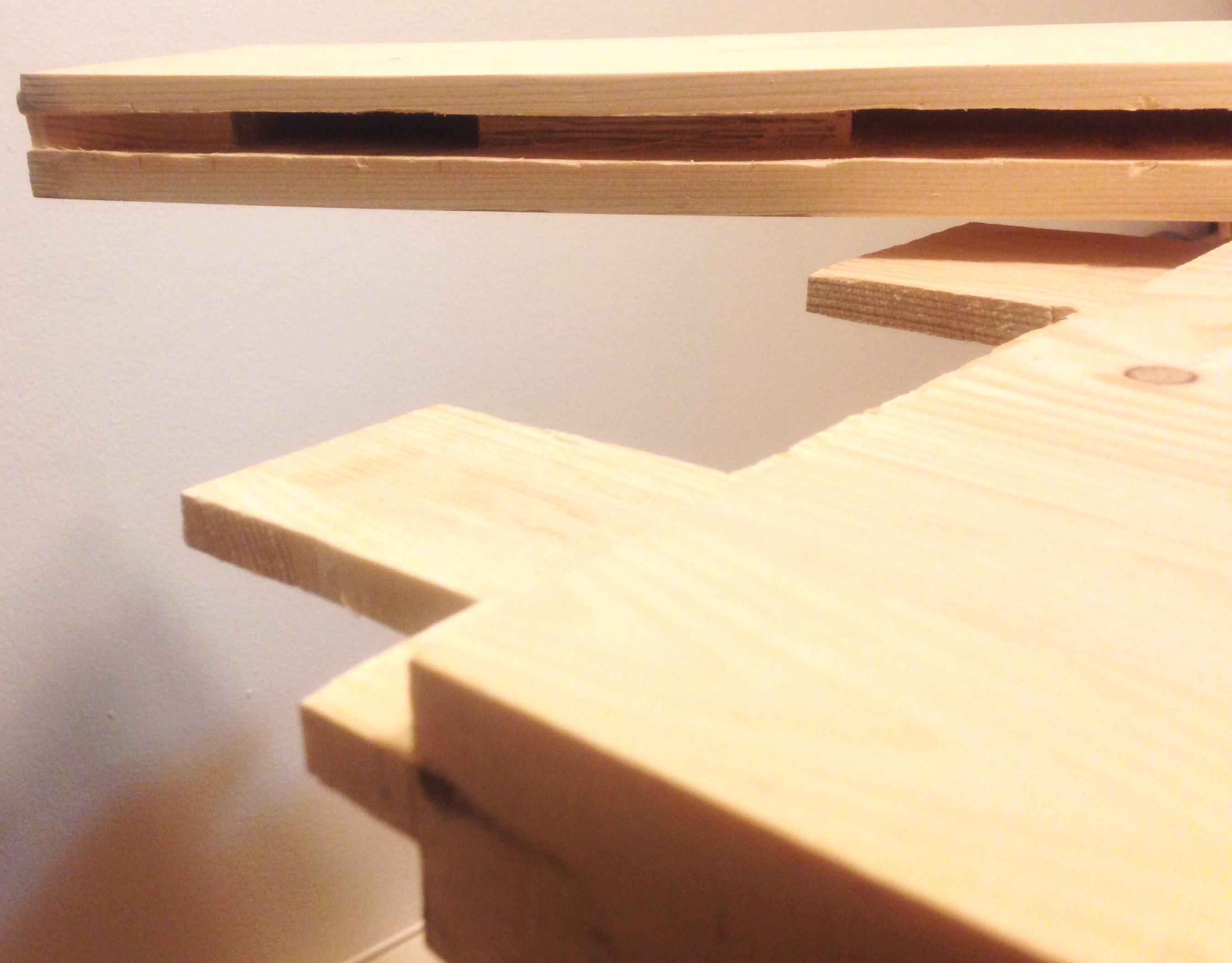 I gave up on fixing the long edge gap, and will leave it as is (for now). However, after cutting the horns of my breadboard ends on either side of the table, my subpar chiselling of the mortise haunch became extremely obvious -- and I decided it was worth it to try the "thick shaving method" there.

I handsawed off the horns a few mm over on each side -- to allow for some error. Some decide to leave longer breadboard ends to create a design element/feature out of them, or decide to enclose the haunch completely, but I wanted them flush and I wanted to be able to see the haunch. Anticipating some end grain planing, I pared the corners of the horns off with a chisel to prevent breakout. 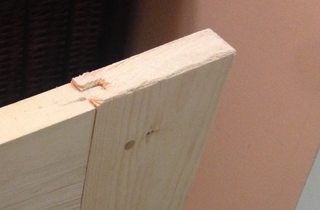 As I got closer to being flush, I switched to sanding. And I started to notice how bad the gaps were, with the dust accumulating in the gaps, (in the image, the white sand dust outlines the gap around the haunch): 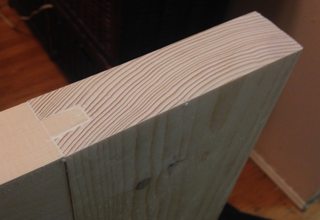 I couldn't produce shavings/sliver thick enough with the plane, so I produced them by paring with a chisel on a spare piece of wood, and adjusted the thickness of the created thin wedge with sandpaper. I applied glue only the breadboard-end side, wedged the shim into the gap, trimmed it and sanded it flush.

I believe I could have glued just the haunch side instead, but the fibers would have needed to be oriented the other way, and it's easier to wedge in parallel with the breadboard end grain. 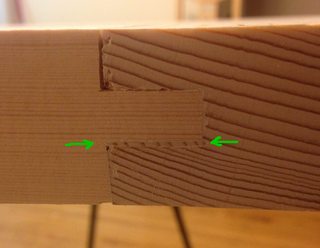 In retrospect I should have switched from the plane to the sanding block sooner, because the last few runs with the plane pulled some fibres out around the edge, as can be seen in the upper lip of the mortise, in the form of little "craters". It would have also looked better if I'd picked wedges that matched the end grain zebra pattern, but it was quite a puzzle already -- again, more patience would have helped.

Edit 2: It's been a few months already, and I'm noticing that the table width of the top shrinks and expands by about 1/16" on each side of the table (average width of 30"), varying with indoor humidity. The glued wedges are holding up so far. This was expected from the start, but the breadboard end length is not always flush with the table. I like to think of it as a built-in *digital hygrometer feature . I sanded the horns flush around the holiday season, so it might be the gift that keeps on giving, depending on how the finish affects it.

*digital, as in: you can read it by passing your digits over it.

First off, well done on building your breadboard ends properly. Far too often these days they're not done right1.

I see using filler is recommended in other similar questions, but it is reported to crack within a year or two, as the panel narrows/widens

There's always the potential for fillers (most of which are brittle) to crack and this is the ultimate case when you can guarantee it would happen because it's a cross-grain situation where one side of the joint is subject to significant movement and the other side almost none.

You could try filling with wax or with a wax-based filler2. Wax fillers can be soft enough that they don't crack easily, so they'll take some movement, but I don't think this is the best option (see last point in this section of the Answer for what I think is).

The plan is to finish it with oil, and I wonder how much of the gap will be covered by the finish.

Essentially zero. Oil, or an oil finish, doesn't build up at all that you'd notice (once the excess has been wiped away as is essential for a good result). This is in their nature, they're very thin finishes that are more in the wood than on the wood.

I would just leave it if you can get past how it looks. Many tables have grooves in their surfaces and while there is of course the potential to trap dust, crumbs etc. it's not too difficult to brush them out.

It's inherent to a table of this kind, made from construction-quality pine, to be a little rustic and IMO on such a table a cosmetic gap like this isn't a big deal, but only your opinion on this matters.

If you do want to fill it I think the best way would be with a slip of veneer, or a thick plane shaving if you can make one (doesn't have to be one long continuous shaving). On the existing gap it wouldn't be easy to fit it neatly, glued only to the breadboard end side, but it's doable in theory at least and will maintain the separation of long-grain and end-grain surfaces. Once planed flush it should be practically invisible even if you know to look for it.

Out of impatience, I gave up on tweaking the shoulders to get the perfect fit along both (cosmetic) shoulders of the tabletop (top/under).

For next time, concentrate your efforts only on the top. The underside doesn't have to be perfect because it's not structural and it will virtually never be seen, certainly never looked at critically. Think of all the ugly connection hardware and fixings hidden on the underside of factory-made tables that most folks are unaware of, and those that do know forget about them in no time.

With hand-made tables it isn't that uncommon for the underside of a tabletop not to be fully smoothed or finished off, in extreme cases with visible planing tracks from a jack plane. If that sort of texture is acceptable I think you can forgive yourself a gap along the shoulder of a breadboard end on a farmhouse-style table!

I've tried using my rabbet plane as a shoulder plane along the width of the table to make the wall truly square, but running perpendicular to the grain creates tearout along the cosmetic shoulder of the table -- so I feel i'm trading one problem for another.

Cleanly cutting the surface ahead of doing the planing will prevent it lifting surface fibres. You're creating what Paul Sellers calls a 'knife wall' and one of its purposes is to give a very neat appearance where it matters most (the surface inside the joint can be, often will be, rougher where it doesn't show and doesn't matter).

1 Some of the worst examples being those screwed firmly in place along the whole length using pocket screws.

2 Wax, sanding dust or other filler material, made into a paste with mineral spirits, or turpentine if you prefer the smell.

Combine the two, and you could probably get away with a really messy joint that nevertheless closes up nice and tight.

Not the answer you're looking for? Browse other questions tagged joinery hand-tools traditional-techniques or ask your own question.

13
How can I make precise corner or notch cuts on the edge of a board?

14
Best way to flatten boards by hand
11
How does one properly mount a breadboard end?
12
Quick corner joints in practice
3
My hand-planed rebate goes downhill - what's wrong with my technique?
6
How to make bottom face of beefy table leg flat and square with sides
10
How to handplane many boards to the same dimensions
6
Precise 90 degree cuts on small pieces
4
pine panels with minor cupping suitable for dovetails?
6
How should I have avoided breakout/spelching here?
1
Fixing a cracked breadboard tabletop