I have an Irwin-Record 9½ block plane which I bought new a year or so ago and have been using and occasionally sharpening the blade on an oilstone. Now the blade-depth adjustment has reached the end of its travel.

When I adjust the blade depth wheel to the other end (fully retracted blade) and move the blade to the next position, the blade protrudes too far - about 1mm depth of cut. The only way to make this work seems to be to grind down the blade significantly which doesn't seem right. 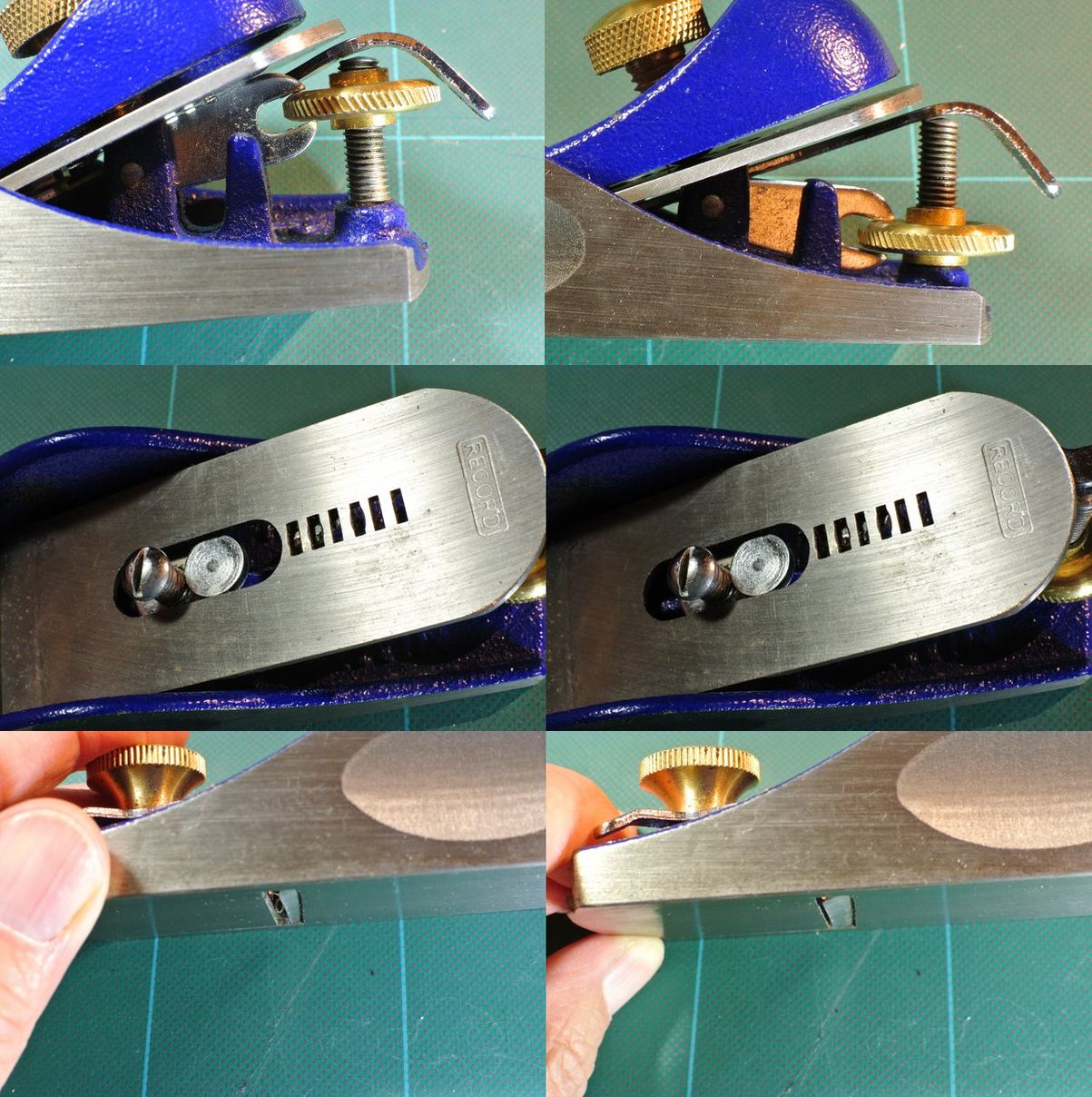 left = before, right = after

What might be wrong and how can I fix it?

Using a vernier caliper, the travel of the fine-adjust tooths without blade installed seems to be about 3mm. The spacing between front edges of all but one of the slots in the blade is about 4mm, so this looks like a design flaw. Maybe Irwin (or their far-away 3rd-party manufacturer) substituted a blade design to save costs somehow?

In fact, looking at it, only the first couple of slots can be used before the end of the long slot in the blade hits the lateral adjuster.

Older Record blades and the current Ray Iles replacements only have grooves on the rear rather than through-slots and they may have been more finely spaced. I only have this photo to go by:

If the long slot in this blade is the same length as that in my Irwin-Record blade (34.3mm), the adjustment grooves are spaced 3mm (centre to centre) and so are a better match to the fine adjustment travel.

This is partly because at the top position, the pivot arm hits the underside of the blade before the adjustment wheel reaches the top of it's screw. There's also a large vertical clearance gap between the adjustment wheel and the edges of the corresponding slot in the pivot lever in which the wheel sits - so part of the wheel's travel doesn't move the lever, until the wheel reaches the other side of the clearance gap.

Given the spacing of the adjustment slots is 4mm, I can't see how this blade can be moved to the adjacent slot and positioned ready for use without grinding the blade down by 1 or 2 mm.

Hmm, interesting. Off-hand I'd say that's a design flaw. You could confirm that by measuring (perhaps with a dial-indicator) the full length of blade travel available from the fine-adjust and comparing it to the distance between the slots in the blade. If the slot spacing is longer than the fine-adjust range, then there is a "dead-zone" of blade positions that can't be reached.

In that case, I'd probably grind off a bit of the end of the blade and move on, and maybe ask for a more carefully designed plane for a holiday present. Rob Cosman likes WoodRiver as a value-priced option, I've often thought I'd give those a hard look if I were in the market again.

I suppose you could possibly modify the fine-adjust travel by grinding or filing something down (like the adjustment nut bottom face or the casting boss it contacts at the bottom of its travel), but that seems like a lot of trouble with no clear assurance of reward and of course the risk of screwing something up permanently :).

9
When sharpening, how do I assess what grit to start on?
10
Sharpening - grit progression
3
Stanley 9 1/4 block plane depth adjuster interferes with lateral adjuster

12
What makes a high quality bench plane?
2
Can I use a 12” granite block for fettling a #5 plane?
2
Is this plane any good for anything?
4
Squaring boards with only a #4 plane
3
Stanley 9 1/4 block plane depth adjuster interferes with lateral adjuster
7
Mouth of a Plane
2
Stanley #1 Plane
2
Does it make sense to own a #1 if I already have a good block plane?
0
Compass plane minimum radius