I received mine earlier today from ebay but no instructions were enclosed and I can't find any on the net.

How do you go about using this correctly to get the most out of it?

Please don't use that stuff on your tools, it's far too coarse.

300 and 600 grit is most certainly not suitable for sharpening a planer blade or such.

300 grit is very aggressive, it takes away a lot of material and not in a very smooth (sharp) way. This is something you might use on an garden axe after you've chopped through roots and earth (and little rocks) for some time to get rid of the dents that will now be visible in the blade. Or you might use it to get a straight cutting edge again if, for some reason, someone had "sharpened" it totally wrong so it's all skewed and sloped.

600 is better but still too coarse to really sharpen a tool. It's most suitable if a blade doesn't have the desired angle.

For sharpening jointer/planer blades and (quality) knives, you might want to start with, say, 1000 grit (or 800 if you have that lying around and can't afford to buy 1000), then have another go with 3000, and finish by pulling it over a 6000 (better 8000) polishing stone.
People who make a religion out of sharpening will probably pull the blade over leather, afterwards (I'm not doing that, 8000 stone works well enough for my practical purposes, but opinions and tastes differ).

The 1000/3000 stones are what make the micro-edge, and the 8000 stone (pulled along) gives that edge a polish, which is what makes the difference between a "meh" sharp blade and a "woah" sharp one. After pulling over the polishing stone, the edge looks like a mirror.

Stones are available up to 20.000 or 30.000 grit (possibly more?), and some people will use them, but these stones are quite unaffordable.

I use Suehiro Cerax 1000/3000/8000 with the Veritas sharpening guide model 2 (and a 5.99 plastic Japanese guide for kitchen knives), which gives a very nice result and is reasonably affordable (around 80 or so currency per stone). It's not "diamond" but corund, but that makes little difference.
10.000 is only available as "mixed grit", which is something I don't quite trust -- else I might be inclined to give that a try. Upwards of 10.000, quality stones are clearly in the 3-digit price range (and no, the first digit isn't a one!).
I've heard of people using the somewhat cheaper "Sun King" or "Sun Tiger" stones instead to full satisfaction. They're cheaper than Cerax but are said to wear out faster, too. For me, the price difference isn't significant enough.

"Diamond" is really only needed to sharpen ceramic blades, and doesn't make a better sharpener otherwise (though it will obviously wear out slower). For tools made of steel, a "normal" stone will do just fine (I was told "soft binding" is better for high-carbon steels whereas "hard binding" is better for high-alloy steels, but I use hard binding all the way, which works fine, too).

The following shots are from a cheap Thai kitchen knife that I bought (and sharpened) this week. Not a wood tool, but you can see the difference beween what a coarse grit and a fine grit does anyway.

As delivered, as sharpened (well, "sharpened") in the Thai sweat shop factory. I would guess this is maybe 600-grit.

Believe it or not, you can actually cut with this, and it isn't all bad either, at least for vegetables and such.
However, I wouldn't want to use a wood tool that has an edge like this. 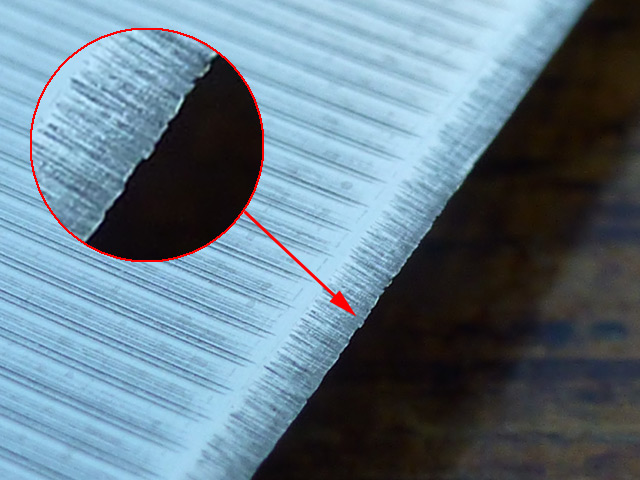 Here, I have partially sharpened the blade using a 1000-grit water stone. Since I am sharpening at a slightly more acute angle than the worker who made the blade, the edgemost part of the blade has not been touched yet, but you can already see that it will be a lot smoother. A dozen more pulls over the stone are necessary to get an even, uniform edge: 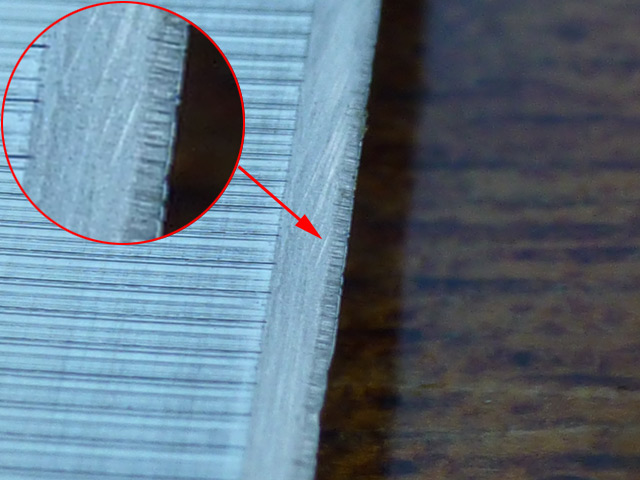 This is after sharpening with 1000-grain, followed by 3000-grain. The edge looks already pretty nice overall, although you can still see irregularities. 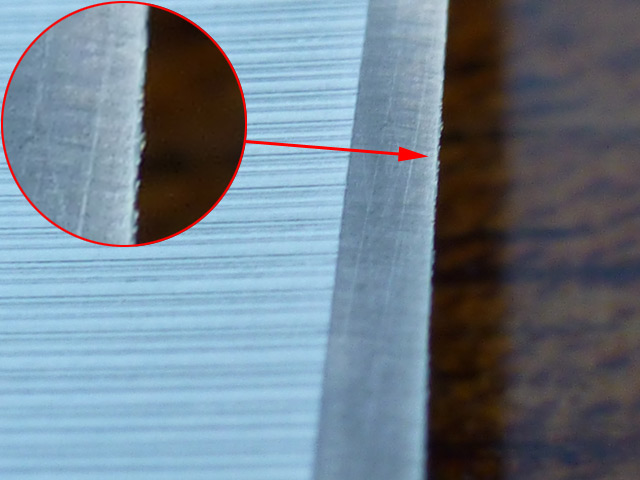 The final result, after pulling over the 8000 polishing stone, a pretty, even edge. I won't claim that this is the sharpest knife in the world, but there are worlds between what the knife looked like 5 minutes earlier and now: 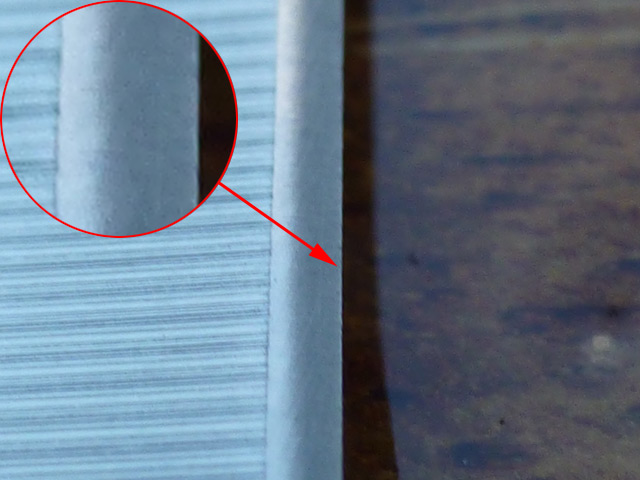 14
DIY honing oil?
8
How to sharpen a planer knife the right way?
4
How many times can I sharpen a planer blade?
1
Lansky System, Help!
5
Is the "paper test" actually relevant to sharpening chisels and planes?
3
Can all whetstones be cleaned?
2
How often should I sharpen?
4
Eclipse style honing guide changing blade geometry & preventing tight mouth setting on planes
7
How to set up a Veritas Basic Grinding jig with short chisels
8
How to cleanup diamond plate efficiently?