I'm getting ready to attach breadboard ends to my table top. The top and ends are cut from 9.5" x 1.5" red oak. Purely for aesthetic reasons, the breadboards will also be 9.5" wide (or deep, rather).

I've thought about either M&T, or a continuous tenon with a single long mortise in the ends, with dowels through the bottom (draw bore with elongated slots in the tongue / tenon / whatever you want to call it in this case.)

Is this a reasonable approach for a 9.5" piece that's basically hanging off in the ether? Is there any advantage to doing individual tenons on each board rather than a single long one ?

If so, what dimensions should I target for the tenon length? Assuming it's 1/2" thick - 1/3rd of the board thickness - is 2" deep enough?

Also, the articles & videos I've read say to only glue the center board so that the rest can move within the groove as necessary. However, the top is made from four boards, so there's no "center." I assume that, if it's glued to one of the center boards, then the table will "grow" more relative to one end of the breadboard than the other.

Is this a reasonable approach for a 9.5" piece that's basically hanging off in the ether? Is there any advantage to doing individual tenons on each board rather than a single long one ?

I don't think there's anything wrong with beefy breadboard ends if it's the desired look. It is not a technical necessity that they be this big however. If larger breadboard ends are on the plans, then, generally speaking, they should be accompanied by larger tenons.

Multiple tenons vs a single one

I'm using the image below as a visual reference -- but only to improve clarity, not to prescribe a particular construction. As far as going for option 1: "multiple tenons + one continuous tongue" versus option 2: "one long tenon", multiple tenons will offer additional strength to your end piece -- between each tenon (i.e. the material outside the volume defined by the blue transparent outline in the illustration's end piece), there will be solid wood linking the underside of the breadboard end, to the topside. It allows the end piece to keep its shape under pressure.

Multiple tenons also require less material to be removed from the mortise, which is generally the more difficult piece to create (at least, with handtools).

That said, even with multiple tenons, you should keep a tongue (the "Haunch" in the photo) that goes the entire width of your panel (as if you had a single tenon for the first 3/4" of the tenons depth). It it will help prevent cupping for parts of the panel between tenons (if they are far apart). To a lesser degree, it will also prevent light (or liquids) from passing through if your joinery is not completely flush. 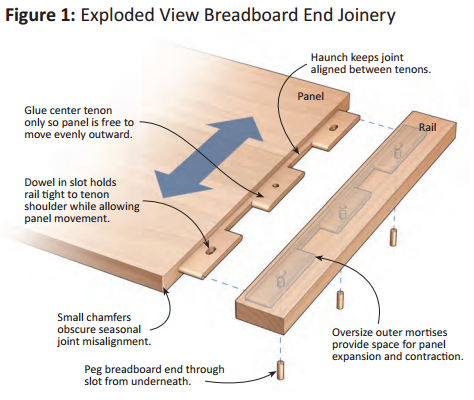 Imagine, for a second, that your breadboard end piece is a hardcover book whose paper pages have been removed, folded closed over the tenon(s). You will want to prevent it from bending or splitting open as you apply downwards force to the table edge. In other words, you want to keep points A and B close to one another in the side-view sketch below. Leaving a gap between tenons (as opposed to a single long tenon) helps with that.

A 2" tenon, if I understand the plan, would leave 7.5" of the width of the endpiece (just under 80% of the weight) unsupported. Intuitively, I'd say longer tenons are required.

There's a rule that tenons in breadboard ends should be 2/3 the length of the width of the breadboard end (minus 1/16in or so at the bottom to account for glue space). Sometimes though, these rules of thumb only work at smaller scales, and don't take into account other factors.

Quoting woodmagazine: The breadboard ends are usually 2" to 3" wide, but you can make them wider or narrower for larger or smaller panels, if you wish. In either case, make the mortise depth about two-thirds the width of the end piece. -- https://www.woodmagazine.com/woodworking-tips/techniques/joinery/breadboard

I've personally achieved good solid results with a 2.5in tenon in a 5in wide endpiece (in 1.25in thick pine) which is a 50-50 ratio instead of 2/3. I personally consider a construction "solid" if it allows an adult (after dinner) to lean or sit on the edge of the table.

One danger you run into when doing a shorter tenon (for 2") is for your breadboard end to "bend down" or wiggle as you apply weight or lift. This is especially true if the fit between the tenons and female endpiece offers some slack. If the pieces are really tight-fitted, then shorter tenons (than the rule of thumb) might suffice.

One thing to consider, which could allow a less deep tenon, is the total amount of overhang you will have (distance between table edge and the closest supporting element). If your aprons/trestle/support allows for the largest BB-end overhang, then you might want to reconsider beefy tenons. Similarly, if you added aprons, and they offered some support to your bb ends, then you could get away with smaller tenons, because the weight would be partly transferred to the support.

For overhangs of 14 in. or less, I tend to avoid breadboard ends because the cross brace at the top of the leg is close enough to keep the table flat. But they are a good option for overhangs of 18 in. or more.

That's got more to do with preventing warp than a falling breadboard end, but it a signal that overhang does matter. And that may convince you one way or another to drop the BB altogether.

I suspect digging a 6.25" mortise (2/3 of 9.5) may be pushing some limits, tool-wise. If you do go the breadboard end route, and settle on tenon/mortise dimensions that are, in the end, not to your satisfaction, you can always correct the situation with (longer) floating tenons, the addition of a brace under the table, or trim down your breadboard end in width (e.g. 7.5" instead of 9.5")

Your assumption is correct. The glue will prevent expansion, and expansion will occur on both sides of the glue. The geometric center of your board is at the junction of your two middle boards. Regardless of if they are edge jointed with glue or not, you can still form a central tenon which is composed half of one board, and half the other.

Becksvoort uses a 4in band of glue on the center tenon. This, presumably, will imply 2in on each side of the geometric centerline.