How to permanently bond metal screws into wood?

My sister recently gave my daughter a toy train set. It's sturdy enough —the axels are thick and strong— but they have screw-in brass eyes and hooks to join the carriages together. 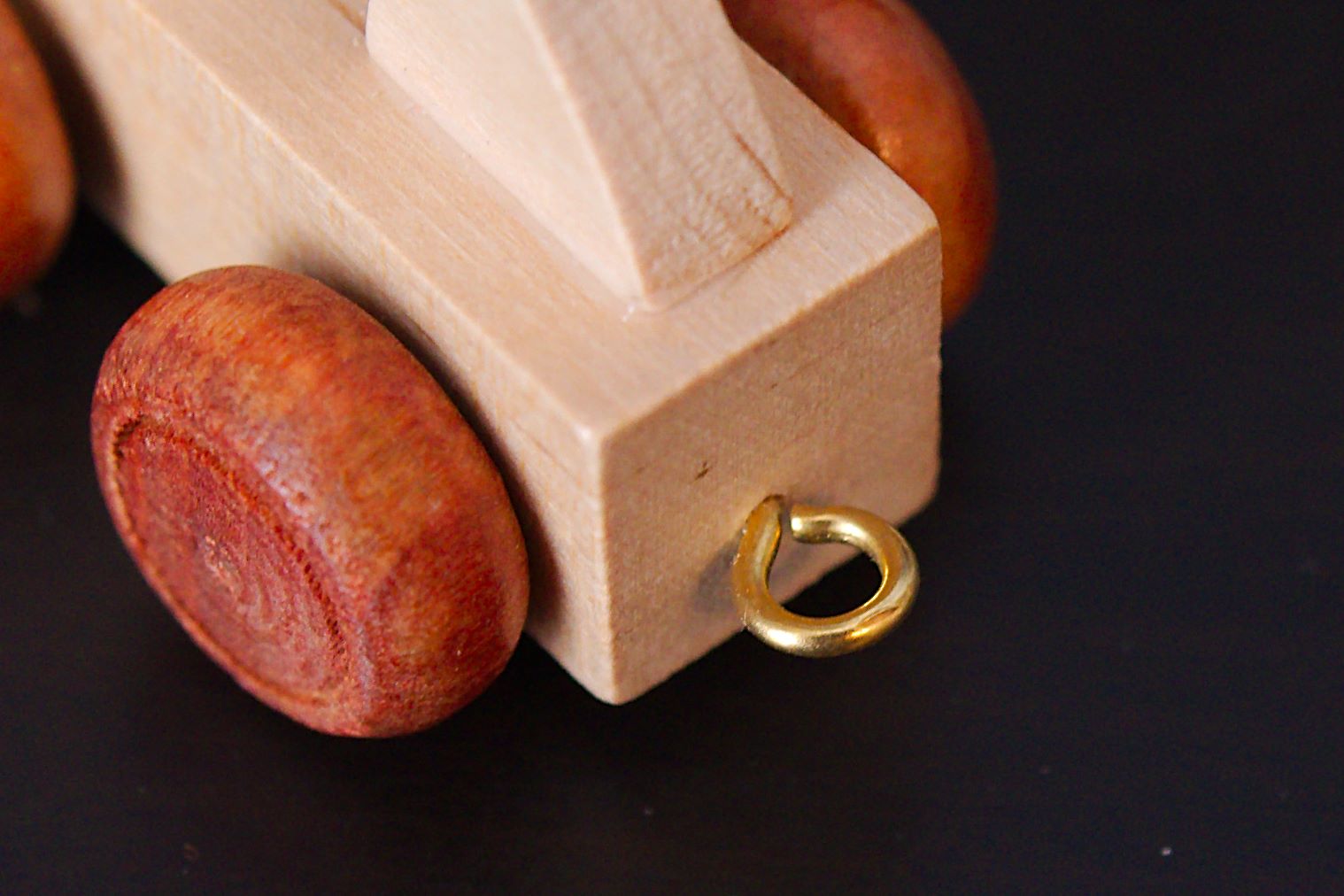 These only take 5 full rotations before they're out and that seems well within the possibility of something getting thrown around by a young child.

Is there a good way to bond wood to brass, in strong and permanent way?

Is there a good way to bond wood to brass, in strong and permanent way?

In this context, no. There's too much available torque to break a glue bond and once you get over the initial resistance you're in much the same position as if you'd applied no glue*.

It would be very different if you were bonding a flat piece of brass to a wooden surface. Even PVA and other glues not known for their ability to bond metal can work surprisingly well in that way.

There are I think only three reasonable candidates for adhesive here, superglue (cyanoacrylate), foaming polyurethane and epoxy.

Superglue
Very strong in a thin layer but doesn't resist shear well as you note yourself and even the smallest rotation of the brass ring results in a shear force being applied to the glue line. While it could be strong enough to resist turning by the fingers of a child one sharp knock would be enough to crack the glue and render it nearly valueless here*.

Polyurethane
Worth trying if you already own a bottle since you lose nothing if it doesn't work well enough.

If you don't already own any and had to buy it for this job though you'd have to make a point of using it up quickly after breaking the seal as it can, and does, go off in the bottle sitting on the shelf — it's not at all uncommon for the great majority of a bottle of polyurethane to go to waste in this way and the glue is not cheap.

Although polyurethane is known for its strength I don't know how secure the bond would be here and anyway I think there's a better candidate.

Epoxy
Your best bet of these three I'm sure. Even a basic 5-minute epoxy is surprisingly strong but generally the slower the setting time the stronger the epoxy.

Slow-setting epoxies tend to be more expensive but at least epoxy has a long shelf life (nearly indefinite IME as long as it is tightly capped) so the unused portion left in the syringes is sure to still be usable somewhere down the line for any future jobs that might crop up.

*I say nearly because almost any glue will give some benefit in that it will strengthen the short wood fibres present in the threading in the hole, as well as acting to fill tiny gaps. So even if the glue bond is broken together these will make the brass screw eye much harder to rotate which is a definite benefit.

Wood glue does not bond well to metal. I would either try a thick CA glue or a high-quality epoxy.

You mentioned CA setting too fast, but there are different types of CA glue. You probably have a "thin" CA glue. Try a "thick" CA glue and see if that is still setting too fast. They normally give you 30 seconds to a minute of open time.

My other suggestion would be a high quality 2-part epoxy like West or Entropy. They bond well to both wood and metal, but they are a bit more complicated to work with. In addition to mixing the 2 parts in the correct proportions you also need to add an appropriate filler. Depending on the hardener you use you should have 10 minutes to half an hour of open time.

Wood glue. In the hole and possibly around the edges afterwards. The latter looks ugly.

Maybe too late but change the loop to something that isn't threaded and does not turn.

On a side note fasten a piece of string to the loop. Make the knot ununtiable through heating, plaiding, gluing or whatever means. It makes the loop harder to swallow and if it is, there is a chance the string is hanging out. Especially if you fastened something (I am thinking of a wooden ball) to the pulling end of the string. I So if the kid runs around with the toy in one hand and a red ball hanging out of the mouth just pull the string. carefully.

Not the answer you're looking for? Browse other questions tagged glue screws or ask your own question.

9
Advice for setting screws in dense wood
13
How can you make a regular screw into a self tapping screw?
3
What are aluminum wood screws that break easily used for?
2
Are "brass" wood screws liable to be fake, or am I just using them too roughly?
4
How to screw beer tap into wood without cracking
5
Are there industrial standards for wood screws?
3
Nails plus glue into endgrain vs screws plus glue vs dado (for shelf)
2
Screws back into a splitting pole