I recently asked a question here regarding the use of 1x4s rather than 2x4s for a laminated workbench top and got some helpful advice. I decided to go with 2x4s, and now it's time to build. Before I do, I'd like to run my general plan past this community to see how it sounds.

I plan on laminating 16 5' long 2x4s to make a 5x2' bench top. I'll use a plane to skim the face of each board to help the gluing process, use my 6 5' long bar clamps to hold the glue-up together overnight, and then build the base.

So, I'll end up with a frame that is 2'x5' with fairly stout legs and good bracing across and along the depth. Then I'd like to use dowels to attach the top, so it could be removed to be semi-portable. Those would be between the top and the stretchers on the left and right sides, either one on each side or a pair on each side.

Is there anything wrong with this design? Most designs I see have the top overlapping the base by a few inches on each side, especially when considering the length. Is this a requirement?

Edit: here's a quick sketch of my idea: 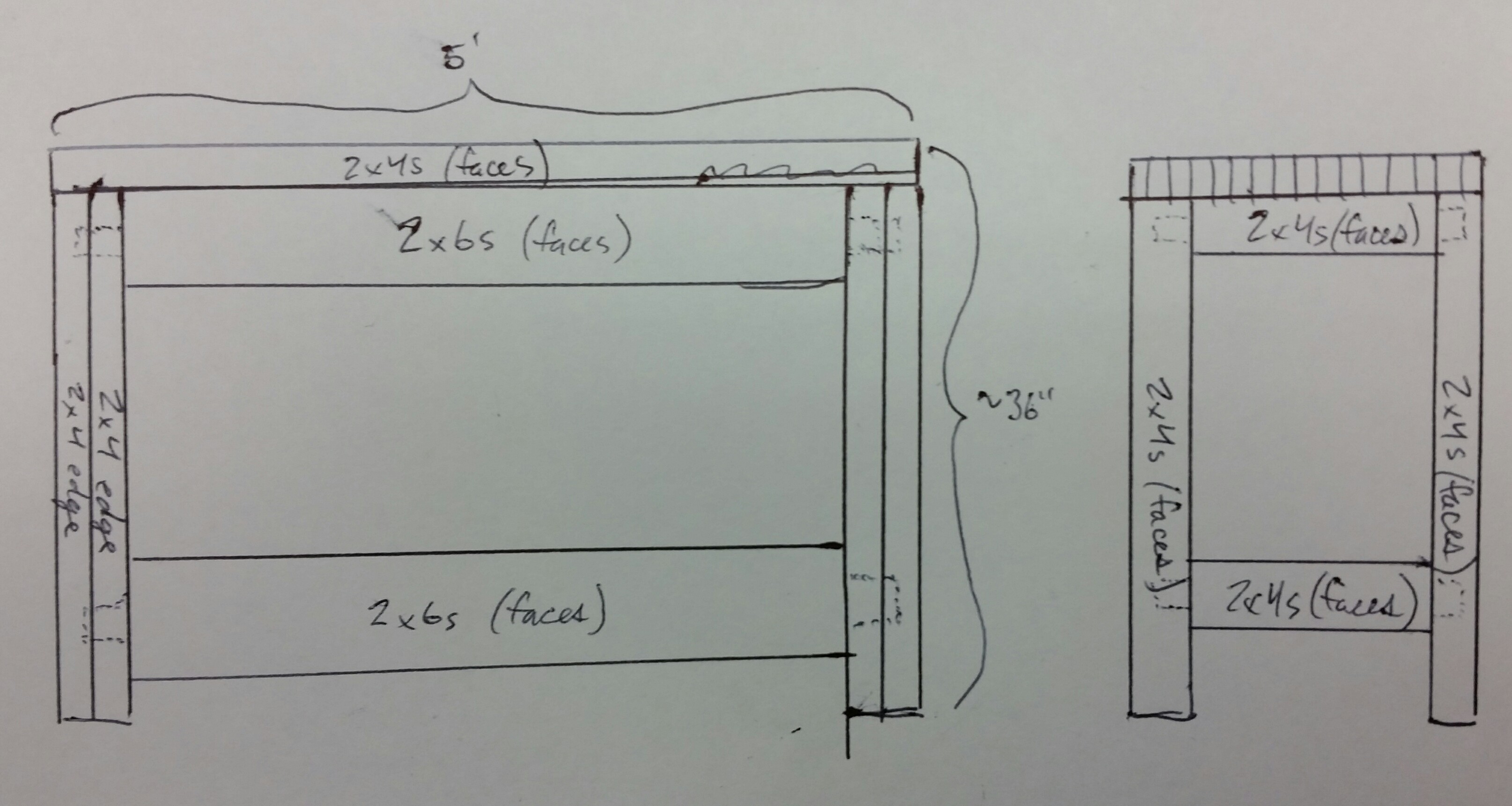 I made a bench similar in construction to what you describe only a bit bigger ( 8' long with two 1' wide top slabs separated by 1 1/2" gap - roubo style split top). I made mine with 2x6 instead of 2x4s; I use it for hand planing so I wanted it to be a bit heftier. It also has a leg vise and an embedded wagon vise running along the front face of the top. I have several considerations for you:

After you added your design sketches I want to add the following:

It will definitely help to have at least a rough drawing, but I don't see a problem with this. Workbenches for woodworking can be very personal and should match the work you do. It's a little small as benches go, but should be sturdy. There are advantages to having the top:

See books by Schwartz and Landis about workbench design for details. But generally, the overhang on the long ends - depending on the width of the bench - allows you to hang something like an entire drawer over it for working. The flush sides help you clamp/hold panels square to the top for edge work, either profiling or joinery.

I think it's worth saying upfront that entire books have been written about workbenches*, going into detail about their designs and build details so as detailed as the Answers you get here might be this will really only scratch the surface!

I'd like to use dowels to attach the top, so it could be removed to be semi-portable.

Good way to do it. This isn't the only way the top can be made easily removable but it's a simple, elegant solution.

Those would be between the top and the stretchers on the left and right sides, either one on each side or a pair on each side.

You should use centrally-placed ones and not a pair each side as expansion and shrinkage of the top will cause a problem with those, even with it minimised by the grain orientation of the wood in this type of top.

It may be overkill but might be worth going with hardwood dowels here. Unless they're large in diameter softwood dowels may not be quite strong enough.

Is there anything wrong with this design?

I refer you to my opening paragraph :-)

Most designs I see have the top overlapping the base by a few inches on each side, especially when considering the length. Is this a requirement?

It's not just a few inches in many cases, overhang can be considerable. 12" (300mm) wouldn't be unheard of.

Whether to have an overhang depends on what work you'll be doing and how — which methods of workholding you'll need to account for, and how frequently. But as a general thing I personally think an overhang is practical and actively desirable to make maximum use of clamps so a must-have on both ends, and possibly on the front and back as well. Depending on where you site the bench of course, if it's against a wall there's no benefit from an overhang along the side or sides in contact with walls.

If you're not going to be using clamps however but instead will rely on holdfasts, hold-downs and other traditional forms of workholding then an overhang may not be necessary at all.

*See this previous Question if you're interested in reading up on the subject more, Is there a workbench "type" reference? although I don't think it's vital that you do so at this point. IMO it would be much better to build a bench and have it done and available and then read up on the subject if you want.

As many who have written about building benches have said already, even a bench that's not perfect is better than no bench at all. Numerous woodworkers have used a bench for years that didn't have all the features they wanted. But if it's solid and doesn't move about when work is being done on it that's what really counts most. Your proposed bench has all the hallmarks of being solid and dependable so with or without minor tweaks just go for it.

3
Is there a workbench "type" reference?
1
Two piece workbench top