Can I enlarge this wood rack without beefing it up?

I'm going to build this firewood rack, but I want to enlarge it and make it 8 feet wide and 54 inches high. It's all stock 2x4 material. Considering the increased load it's going to be carrying, will the two single bottom rails still suffice without sagging over the years? And how about the single middle support? Does that need to be two supports? This is going to be in a garage protected from weather, so I would expect it to last indefinitely. 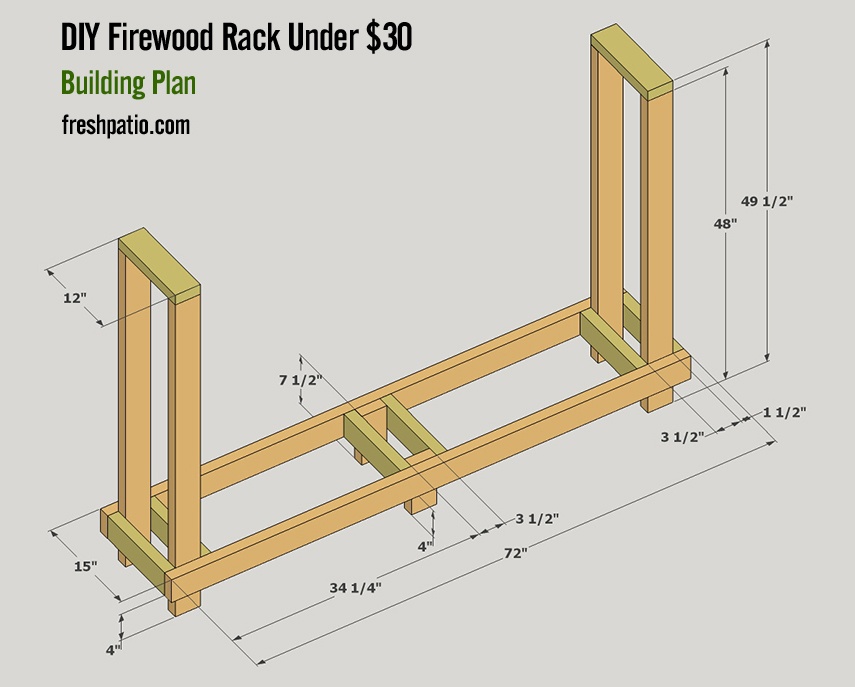 Firewood stacks pretty well, so there shouldn't really be any load acting sideways on the upright supports, even with a much wider (longer?) rack. Additionally, you're only making it taller by about 5 inches (~10%), so it's not a huge change in that direction. A lot of people stack firewood without any supports at all.

Looking online, a cord of wood (4'x4'x8') weighs about 4000 lb. Your rack would hold approximately 1/4 of a cord, which would weigh about 1000 lb. Given these numbers, I'd still leave the single foot in the middle, or maybe add a second foot with any scraps you have leftover.

For the uprights, if you plan to loosely stack the firewood, no changes should be needed. If you really want to cram as much wood in as you can (i.e., using the uprights to hold wood which would otherwise fall), you may want to add some diagonal braces to each upright to provide some additional lateral stability. For a typical firewood pile, though, they shouldn't be needed.

Not the answer you're looking for? Browse other questions tagged weight-capacity or ask your own question.

17
How can I determine the load capacity of a simple bench?
3
Load Bearing Weight Capacity of a 3/4“ x 3/4” Wood Molding?
3
Weight bearing for a loftbed and wood only joints
0
Is this shelving wall mounting idea stupid?
1
Is this desk structurally secure?
0
How can I figure out how much weight a piece of wood will be able to handle before breaking?
0
How much could I load on to this cabinet? Should I reinforce it?